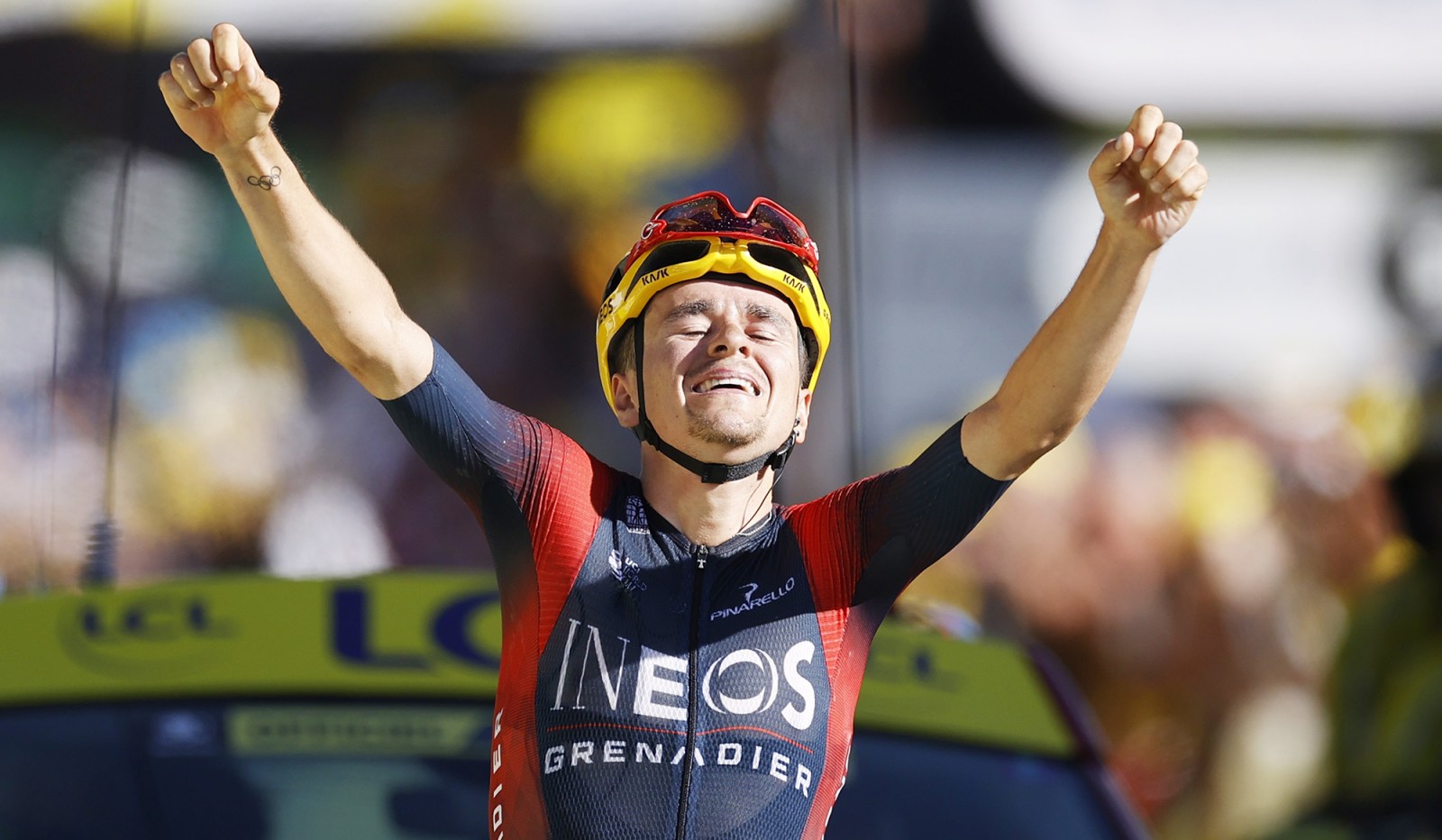 The stage was won by Tom Pidcock, and Jonas Vingegaard retained the yellow jersey.

Tom Pidcock added an iconic Tour de France stage win to his impressive CV when he claimed victory at L’Alpe d’Huez at the end of a long solo ascent on Thursday.

The cyclocross world champion and Olympic gold medallist in cross-country mountain biking attacked from the day’s breakaway with more than 10km left in the final climb, a 13.8km effort at 8.1% and never looked back.

“It’s one of the best experiences in my life,” said Tour debutant Pidcock after the 12th stage, a 165.1km trek from Briancon.

Fending off a sea of fans, flags and flares, Pidcock finished ahead of South African Louis Meintjes and four-time Tour winner Chris Froome, who enjoyed his best day on a bike since a career-threatening crash in 2019.

“You just have to pray that they move out of your way,” Pidcock said of the tens of thousands of fans on the climb.

“The idea today was to get me into the break and win the stage. So, box ticked, I guess.”

Overall leader Jonas Vingegaard came under attack from defending champion Tadej Pogačar in the finale, but it was too little, too late, by the Slovenian, who lost his yellow jersey on Wednesday when he cracked in the final ascent to the Col du Granon.

Vingegaard leads Pogačar by two minutes and 22 seconds as the 23-year-old leapfrogged Romain Bardet into second overall after the Frenchman lost touch in the last kilometres.

Pidcock’s team leader, Geraint Thomas, the previous winner at L’Alpe d’Huez in 2018, finished with Vingegaard and Pogačar, and sits in third place overall, 2:26 off the pace.

Bardet slipped down to fourth, a further nine seconds adrift.

The nine-man breakaway included Froome, who has been struggling to rediscover his form since he sustained multiple serious injuries three years ago, as well as Pidcock.

They built an advantage of seven minutes, which started to melt in the searing heat when Jumbo-Visma’s Wout van Aert took a turn at the front of the bunch.

The lead was down to 4:15 when the peloton reached the Col de la Croix de Fer.

Pidcock rode the descent at breakneck speed to widen the gap again and the leading group started the ascent to L’Alpe d’Huez (13.8km at 8.1%) with a six-minute lead.

Pidcock was the first to attack, 10.5km from the line, dropping Neilson Powless and Giulio Ciccone for good.

Meintjes and Froome lost contact, but had the Ineos Grenadiers rider in their sights until another acceleration by the 22-year-old Pidcock buried their last hopes of victory.

In the group of favourites, a brutal acceleration by Vingegaard’s team-mate Primož Roglič dropped Nairo Quintana and David Gaudu.

An acceleration from another Jumbo-Visma rider, Sepp Kuss, dropped Bardet and Adam Yates.

Pogačar jumped away twice within the last 4km, hoping to gain revenge on Vingegaard a day after the Dane made him crack in the mountains.

Vingegaard, however, followed with apparent ease to stay firmly in control of the race.

It was only with less than 4km to go that Pogačar could make his first move and Vingegaard followed easily, also barely getting out of the saddle when the second attack came.

“He did some good attacks, he was strong today and luckily I was able to follow him,” Vingegaard told reporters. “He looked strong. In the end, I was there, so today was a good day.”

The Slovenian promised he would continue to fight, looking ahead to the Pyrenees in the third week.

“I think after yesterday I was not as confident as I thought I’d be,” Pogačar said candidly the day after the biggest defeat of his career.

“I could have been stronger today, but I’m okay with the result. It’s still a long way to go. The Tour is not over.

“I know why I suffered yesterday. This will not happen again. I’m pretty confident. Jonas is super, super strong, but I need to find a way to regain some minutes.” DM