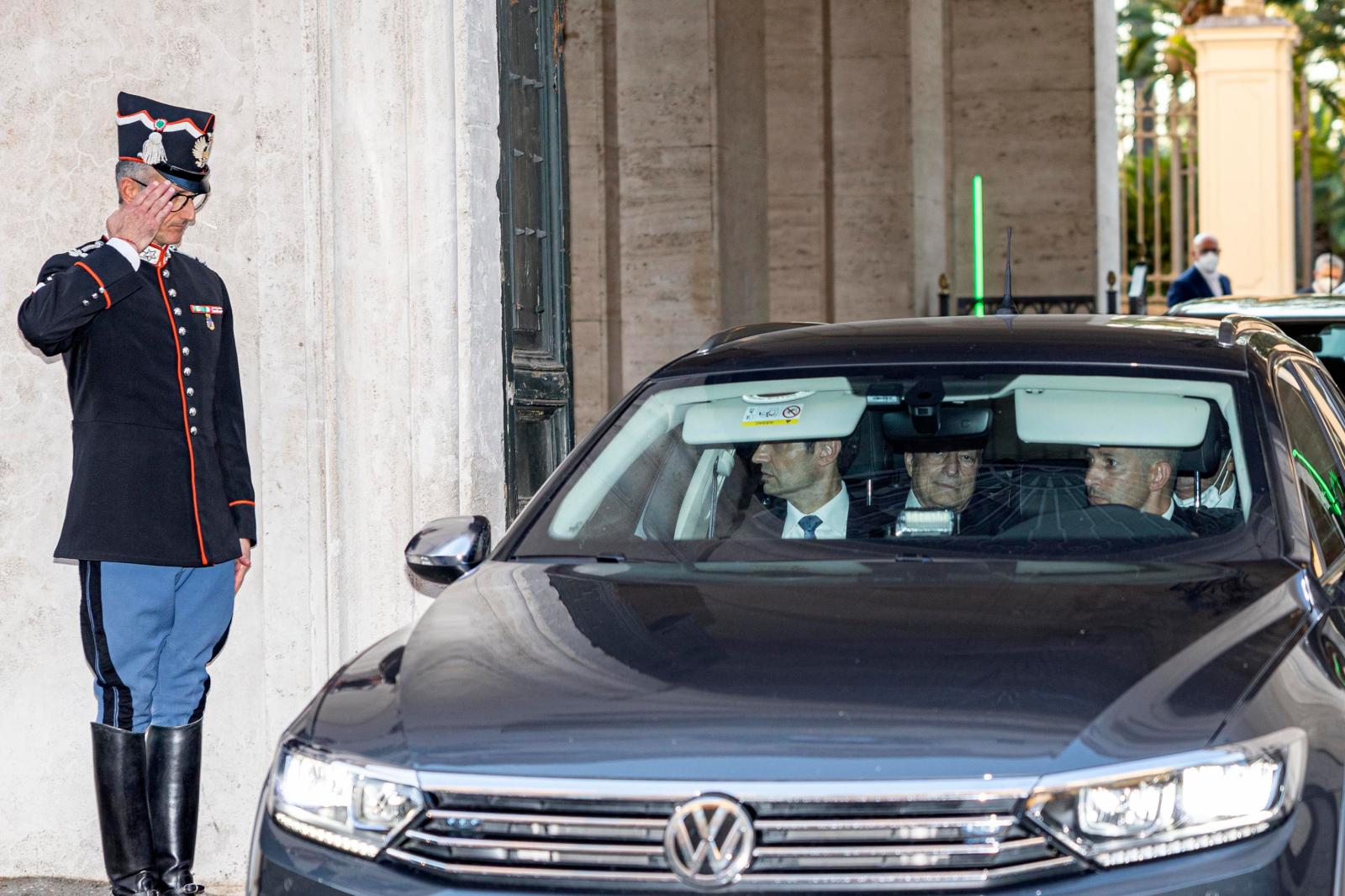 Italian Prime Minister Mario Draghi (C) leaves the Quirinal Palace after talks with Italy's President Sergio Mattarella in Rome, Italy, 14 July 2022. Mattarella has not accepted Draghi's resignation, inviting him to go to the Chambers to assess the situation. EPA-EFE/MASSIMO PERCOSSI

ROME, July 15 (Reuters) - Italy might need early elections to overcome a political impasse, government officials said on Friday, after Prime Minister Mario Draghi tendered his resignation in the wake of a mutiny by a coalition partner.

President Sergio Mattarella rejected Draghi’s resignation on Thursday and asked him to address parliament next week to get a clearer picture of the political situation.

If unity cannot return swiftly to government ranks, the only alternative would be for an election to be called in the autumn, Foreign Minister Luigi Di Maio said, warning that an early vote would be welcomed by Russia, but would damage Italy’s economy.

“If Draghi falls, we vote,” he told RTL radio, adding that without a fully functioning government in the coming months, Italy would risk losing billions of euros in European Union post-pandemic recovery funds and would not be able to enact measures to combat climbing energy costs.

“The Draghi government and the coalition that supported it must continue, but right now I see it as very, very difficult.”

Draghi’s 18-month-old government was thrown into turmoil by the populist 5-Star Movement, which boycotted a parliamentary confidence motion on Thursday on Draghi’s plans to tackle the growing cost of living, arguing they did not go far enough.

Critics say the party, which was torn apart by a schism last month, was acting merely out of self interest, anxious to raise its profile with voters following a slump in the opinion polls.

The risks of political chaos has unnerved financial markets with the premium Italy pays over German debt rising to a one-month high on Friday.

Underscoring those concerns, European Central Bank policymaker Olli Rehn said Italy could be hit particularly hard by a European energy crisis in the wake of its political crisis, saying Draghi had brought “much-needed stability, perseverance and firmness to Italian decision-making.”

Speaking in his native Finland, Rehn said: “It may be that we will see a very difficult period in Italy.”

A national election is due in the first half of 2023 and bringing the vote forward would give parties little time to draw up manifestos and prepare their lists of candidates.

However, two sources in the prime minister’s office, who declined to be named, expressed pessimism over the future of the coalition, saying Draghi was determined to stand down. The most likely outcome was a vote in early October, they said.

In that case Draghi could stay on in a caretaker capacity, but would not be able to draw up budget for 2023 or enact reforms demanded by Europe in return for the recovery funds.

“Italy cannot do without Mario Draghi,” said Renato Brunetta, the public administration minister and a member of the centre-right Forza Italia party. “We cannot lose the credibility and trust we have gained in Europe and the world in such difficult times,” he wrote on Twitter.

Draghi, a widely respected former ECB president, has played a prominent role in the EU’s response to Russia’s invasion of Ukraine, helping draw up economic sanctions on Moscow and sending weapons to Kyiv.

None of the parties in the national unity government have called for elections in the wake of Draghi’s resignation offer. However, the one major group that stayed outside the coalition, the far-right Brothers of Italy, embraced the idea at once.

Led by Giorgia Meloni, the Brothers of Italy has seen its support soar during its time in opposition and looks likely to emerge as the largest single party in the next parliament.

“With Draghi’s resignation … this legislature is over,” Meloni wrote on Twitter. “Elections immediately.”

Italy has not had an autumn election since World War Two as that is normally the period when the budget is drawn up.

The 5-Star is likely to come under heavy pressure from other coalition partners to back down in its confrontation with Draghi and allow his administration to see out the legislature, but there was no immediate sign of any shift in its position.

“We now have 5 days to work so that parliament confirms its trust in the Draghi government and Italy emerges as quickly as possible from the dramatic crisis it is currently entering,” said Enrico Letta, head of the centre-left Democratic Party.

By Crispian Balmer and Giuseppe Fonte