Global outlook: There are lessons to be learnt from Sri... 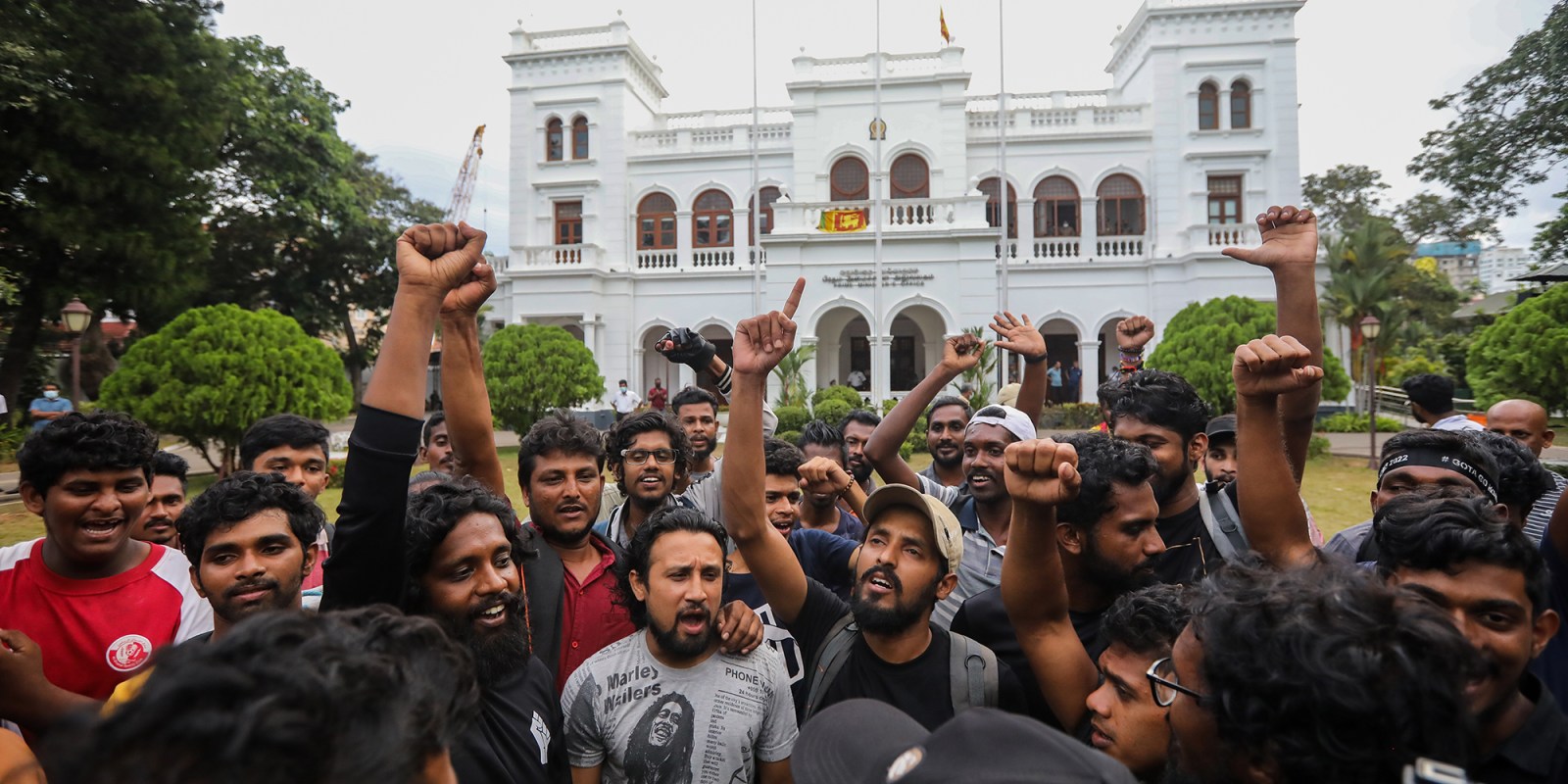 Protesters cheer and shout slogans after they vacate the Prime Minister's office in Colombo, Sri Lanka, on 14 July 2022 after the resignation of Gotabaya Rajapaksa. (Photo: EPA-EFE / Chamila Karunarathne)

Images of Sri Lankans running out of food and queueing for petrol paint a real-time picture of what it would mean to experience a ‘sea of troubles’, which the IMF this week warned may lie ahead. Food prices are coming off the boil, but the economic outlook remains highly unpredictable.

Sri Lanka has become the unfortunate poster child for what the International Monetary Fund (IMF) this week termed a “sea of troubles” facing the world economy.

The south Asian country has been moving ever closer to the economic abyss since 2019, and citizens finally took the situation into their own hands, physically ousting the president and Prime Minister from their residences and demanding their resignations.

The list of the island economy’s woes is long, and a checklist of a worst-case outcome for economies not able to cope with the fallout from the two unprecedented crises that have hit the world over the past two years.

Sri Lanka’s situation may be at the extreme end of the possible range of economic outcomes for countries this year, but the recent G20 meetings and the IMF’s recent update on the economy highlight that the global economy is headed for even rougher waters.

The way governments and policymakers navigate these will determine whether there are economies that follow Sri Lanka into the abyss or make it through.

The G20 meetings were an opportunity to see the lay of the land. They were defined by the emphasis on how to tackle food and energy insecurity, and marked by tensions between Russian and Western delegates, highlighting that the Russia-Ukraine war is unlikely to end in the foreseeable future.

United Nation Food and Agriculture Organisation (FAO) director-general Qu Dongyu shared the impact of the last two years of crises on world hunger numbers. According to the latest State of Food Security and Nutrition in the World Report, the number of people going hungry in the world has risen by 150 million since the beginning of the pandemic.

The FAO estimates that the war in Ukraine could see 13 million more chronically undernourished people this year, and 17 million more in 2023, adding to an already challenging situation.

Qu said: “Recent global events – from the Covid-19 pandemic to the climate crisis, multiple conflicts around the world and the war in Ukraine – have all heavily affected agrifood systems in multiple ways.”

Bringing down inflation, particularly high food and energy inflation, has been the number one priority of central banks around the world this year, with the IMF calculating 75 central banks have raised interest rates since July 2021. That’s three-quarters of the central banks the IMF tracks.

In recent months, there have been welcome signs that commodity prices are easing off, with agricultural commodities and food prices among them. Brent crude oil has fallen from $123 to close to $100 and industrial metals have fallen to their lowest levels since late 2020.

After reaching an all-time high in March 2022, the FAO Food Price Index, which tracks monthly changes in the international prices of a basket of commonly traded food commodities, eased 2.3% month-on-month in June this year, but remains 23.1% higher year-on-year.

According to a Bloomberg article on whether inflation is reaching its peak, a JP Morgan agricultural commodities index experienced a 10% decline in early July, “thanks especially to a correction lower in wheat prices”.

In recent analysis, Morgan Stanley Research attributes the decline in food prices to, among those factors, an expected increased output by farmers, weather normalisation and the potential for easing of tensions between Russia and Ukraine.

It says that although inflation is still running high, food prices – which increased 65% globally over the last two years – are likely to peak this year and begin declining in 2023.

Though perhaps overly optimistic on a likely easing in Russia-Ukraine tensions, the other fundamental improvements in global agricultural production are encouraging and could have a material impact on broader global economic outlook by minimising the impact of high food prices on private consumption.

Says Morgan Stanley’s research team: “When consumers pay more for food, they spend less on other discretionary items, which has serious implications for the global economic recovery.

“In the US, for instance, Morgan Stanley estimates that there is a 1% drop in private consumption a year after a 20% supply driven increase in food price, with a significant impact to spending on motor vehicles.

“In emerging markets, the effect of persistent high food prices on overall spending is even more pronounced.”

Notwithstanding these promising green shoots, IMF MD Kristalina Georgieva in her latest blog offers a keen reminder that the global economic outlook remains extremely uncertain, saying: “It’s going to be a tough 2022 – and possibly an even tougher 2023, with an increased risk of recession.”

She goes on to stress: “Think of how further disruption in the natural gas supply to Europe could plunge many economies into recession and trigger a global energy crisis. This is just one of the factors that could worsen an already difficult situation.”

The three measures the IMF considers necessary to avoid a worst-case scenario akin to Sri Lanka are: bringing down high inflation, employing fiscal policy to help, not hinder, central bank efforts to bring down inflation, and foster global cooperation, led by the G20.

The first is underway, with central banks geared to do what it takes to break the back of inflation – if not the global economy too. Getting the next two right could prove far harder.

Governments have left much of the job of keeping economies afloat to the central banks for the past two decades.

Multilateral global coordination has been overtaken by bilateral diplomacy in what Stefan Wolff, Professor of International Security, University of Birmingham, describes as “the new bipolar system” – as was clearly apparent at the G20 meetings.

Thus, governments and policymakers, particularly those whose economies are under severe strain because of the crises we are contending with, are unlikely to get the sufficient relief from multilateral sources and will largely need to tough it out alone, with lifelines from the IMF their only port in the storm.

If there’s one lesson that can be taken out of Sri Lanka’s economic and political meltdown, it’s that the end-game for a government that fails to deliver to the people is not pretty. BM/DM