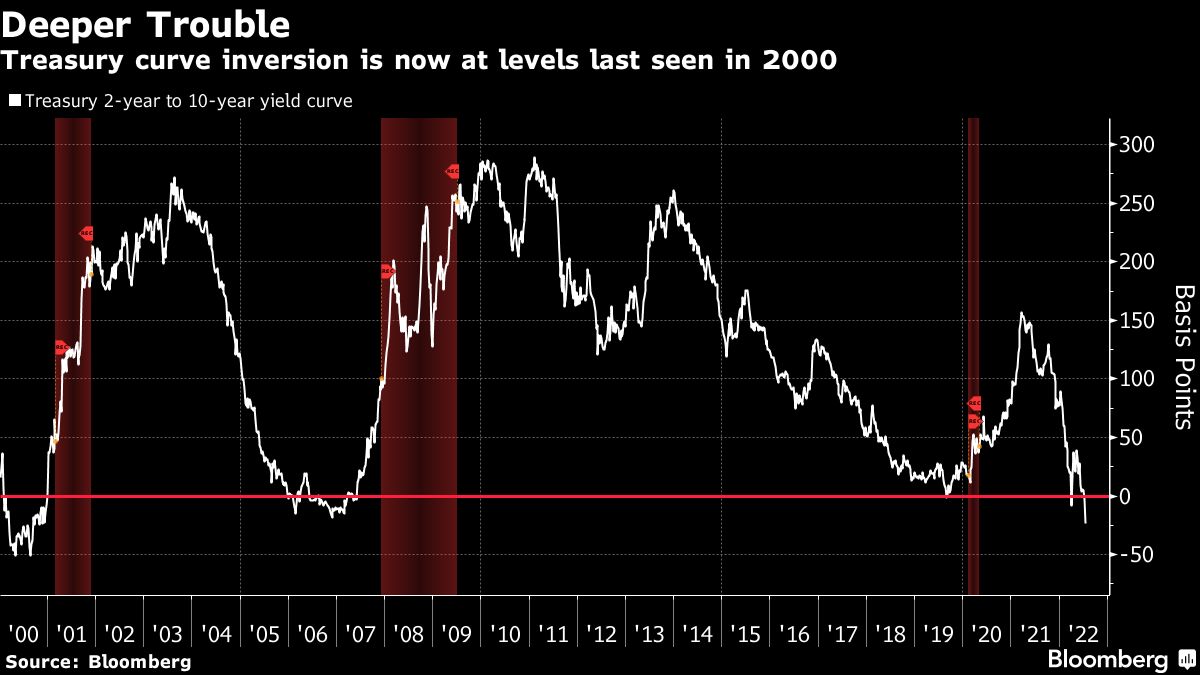 US Treasury two-year yields, sensitive to imminent Federal Reserve moves, climbed further while longer-maturity rates also went higher. The inversion between two-year and 10-year yields – a potential recession indicator – is the deepest since 2000.

Stocks in Asia gyrated, while US equity futures pared declines on Thursday as investors assessed the prospect of a recession on hardened expectations for more aggressive Federal Reserve monetary tightening after sizzling US inflation data.

An Asian share gauge trimmed losses as Chinese technology shares advanced. S&P 500 and Nasdaq 100 contracts shed about 0.2%. A volatile US session ended with modest losses, a resilience possibly rooted in speculation over whether the 9.1% consumer-price reading marks the peak.

Traders shifted toward expectations of an historic one percentage-point Fed interest-rate hike later this month. Fed Bank of Atlanta president Raphael Bostic said “everything is in play” to combat price pressures.

The dollar advanced and the euro fell back toward $1 after briefly dipping below it Wednesday. Oil hovered at $96 a barrel. Bitcoin rallied past $20,000.

In Singapore, the city state’s currency strengthened on an unexpected tightening of monetary settings, part of a global wave of steps to curb the cost of living. Australian bond yields surged on a strong jobs report, which boosted the case for a further increase in borrowing costs.

The big question for markets is whether the latest US inflation print marks the peak. Commodity prices, pushed up this year in part by supply disruptions related to Russia’s war in Ukraine, have moderated somewhat lately.

But if higher costs prove to be persistent and come alongside a global economy buckling under rate hikes, that could be toxic for a range of assets already nursing heavy losses in 2022.

“Stubbornly high inflation increases the risk that the FOMC continues to hike aggressively and triggers a recession,” wrote Kristina Clifton, senior economist at Commonwealth Bank of Australia. That’s increasingly the market’s base case and recession fears will continue to support the dollar, she added.

Fed Bank of Cleveland President Loretta Mester said in a Bloomberg Television interview the consumer-price report was uniformly bad and that the central bank will need to go well beyond the neutral level of rates. The figures don’t suggest a smaller hike than in June, she added.

Swaps referencing Fed meeting dates are priced for the policy rate to peak at about 3.7% this December, up from the current target range of 1.50%-1.75%. Traders then expect the Fed to start cutting rates, with more than three quarters of a percentage point of reductions priced in between the expected peak and the end of March 2024. BM