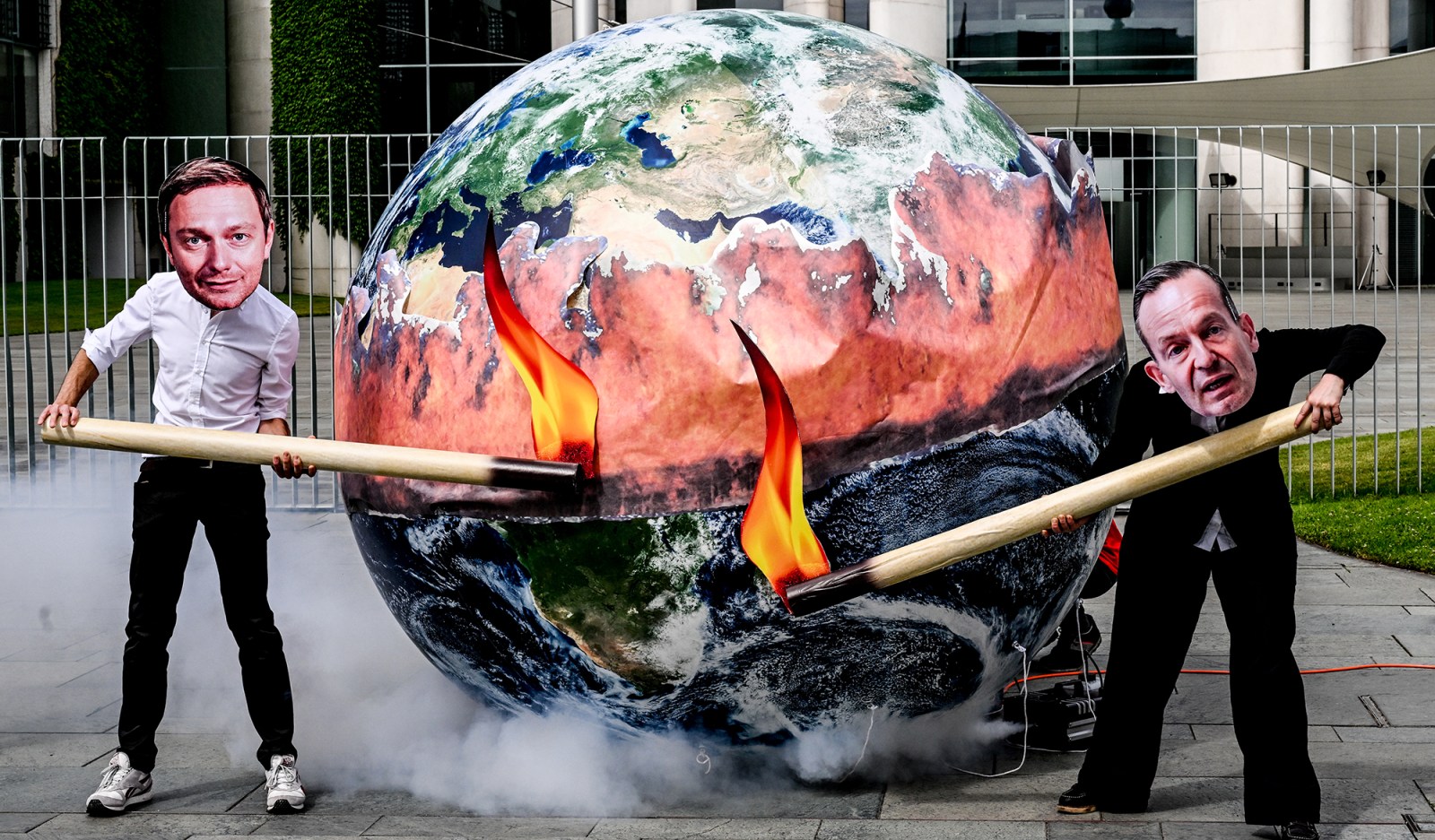 From Vietnam to Utah, the climate crisis is being felt and dealt with in various ways. In this daily climate brief, we aim to give a round-up of the latest developments and news from across the globe.

Utah’s Great Salt Lake dropped to its lowest recorded level this month amid a two-decade drought, a grim milestone as researchers and politicians point to grave threats to wildlife and people along its receding shores. The nearby metropolis of Salt Lake City is already subject to dust storms that experts fear could get worse.

“To save the Great Salt Lake, so that we don’t become Dust Lake City, is to make a conscious choice that the lake is valuable and that the lake needs to have water put into it,” said atmospheric scientist Kevin Perry, who has biked across the dried-out lake bed since 2016 to study its composition. For years, water that would otherwise end up in the lake has been diverted for human consumption, industry and agriculture. Combined with the ongoing drought, which has been made worse by climate change, that has exposed ever more of the lake bed.

On 3 July 2022, the surface of the lake fell to the lowest level since records began in 1847 — to an average of 1,277m above sea level, according to the US Geological Survey. It is expected to decrease further until autumn or early winter, when incoming water equals or exceeds evaporation.

The lake contains little more than one-fourth the volume of water now as it did at its high point in 1987, the agency said.

The lake has lost nearly half its surface area from the historic average, exposing about 2,000km2 of lake bed — an area larger than the Hawaiian island of Maui.

Not only humans are endangered. Underwater reef-like structures host a micro-organism that is food for brine shrimp, in turn an important food for birds, but the structures dry out and turn grey when exposed.

An estimated 10 million birds from more than 330 species migrate through or live at the lake each year, said Max Malmquist of the National Audubon Society’s saline lakes programme.

With public awareness and pressure to act growing, Utah governor Spencer Cox signed into law 11 bills related to water conservation and policy in the last legislative session. Longer-term solutions will require the major consumers — agriculture, industry, municipalities — to consume less water and give more to the lake. – Reuters

Vietnam should spend $368-billion until the end of 2040 to mitigate and adapt to climate change while advancing its development goals, according to a report from the World Bank.

The South East Asian country, with a population of about 100 million, is one of the world’s most vulnerable nations to extreme weather events and rising sea levels. Without taking the proper adaptation and mitigation measures, investing about 6.8% of its annual gross domestic product, climate change could cost Vietnam as much as 14.5% of its GDP by 2050, according to the analysis released on Thursday.

“Vietnam should embrace a new development paradigm based on two connected pathways — to adapt to climate change and build resilience, and to mitigate climate change by decarbonising growth and steering the economy away from carbon-intensive energy,” the report said.

If it follows that path, Vietnam can achieve its climate objectives while expanding its GDP per capita by more than 5% a year, it added. The public and private investments needed must also be accompanied by structural and policy reforms including a carbon pricing mechanism. – Bloomberg

Thousands of people were evacuated because of a wildfire in Turkey’s southwestern Datça peninsula, as firefighters battled on Thursday to contain the blazes fanned by strong winds that spread to residential areas overnight.

Forestry minister Vahit Kirişci said preliminary investigations showed the fire broke out at an electrical transformer at about noon on Wednesday.

“What makes our job a little more difficult is the wind effect, the direction and intensity of which is unpredictable,” he said early on Thursday.

Turkey’s Disaster Management Authority said about 450 houses and 3,530 people were evacuated as fires reached residential areas in the sparsely populated parts of the peninsula.

Footage from Wednesday showed smoke billowing from the woodlands as helicopters doused the blazes. It also showed the garden of a house engulfed in smoke, with trees catching fire.

The Mugla province mayor’s office shared data that showed winds in the region had eased significantly on Thursday morning.

Countries including France and Portugal — enduring a second heatwave in as many months — have been hit by a series of wildfires over the past few weeks. Scientists say human-induced climate change is making heatwaves more likely and more severe.

The blazes in southwestern Turkey conjured up memories of 2021’s summer fires that ravaged 140,000 hectares of countryside, the worst on record. -Reuters

UK heatwave to ‘make a dent’ in economy

The UK’s unusually long heatwave is likely to melt British productivity as people struggle to focus and risk falling ill, according to an expert on the economics of climate change.

While high atmospheric pressure normally creates hot spells across Europe at this time of the year, climate change is making heatwaves more intense, more frequent and longer, according to Bob Ward, policy and communications director at the Grantham Research Institute on Climate Change and the Environment at the London School of Economics and Political Science.

It’s particularly worse in the UK, which “still thinks of itself as a cold country”, he said. Most British homes and smaller offices are ill-suited to hot weather because they’re designed to let a lot of sun come in and have poor natural ventilation.

“There’ll be a big dent in the economy as a result of this period,” Ward said, because people tend to be less productive in hot weather.

The increasing number of people working from home this summer may make things worse, since many workers do not have the luxury of an air-conditioned house.

Even those lucky enough to have air-conditioning at home will face sky-high electricity bills owing to soaring energy prices. Air conditioning is “simply unaffordable” for people with low income, Ward said.

Hot spells normally harm people with underlying illnesses, particularly breathing problems. But the streak of warm days and nights that has been going on for weeks and which doesn’t allow body temperatures to cool, is a threat to just about everyone.

Temperatures in the UK are forecast to exceed the daytime record of 38.40C on Sunday or Monday. That’s after more than a week of thermometers hovering around 300C in a country where such incidents used to last a couple of days, according to Ward.

The heatwave should end sometime next week, when thundery rains are due to take over, according to the Met Office. – Bloomberg

After a top court ruled in 2021 that the country must tighten its climate protection law, the then government set more ambitious CO2 reduction targets, including being carbon neutral by 2045.

The new coalition government presented plans in 2021 to step up climate protection efforts that entail far-reaching reforms for the utility sector and across manufacturing industries, buildings, transport and agriculture.

In March, Germany’s environment agency said CO2 emissions in the transport sector were at 148.1 million tonnes in 2021, missing its targeted 145 million tonnes.

The ministries had a deadline of 13 July to present an immediate programme to ensure the sector would comply with annual emissions targets in the coming years.

The programme will support a “digitisation push” to promote working from home as a way to cut transport emissions.

The measures could save about 13 million tonnes of CO2 equivalents by 2030 in the sector, compensating for the 2021 shortfall, the transport ministry said. – Reuters