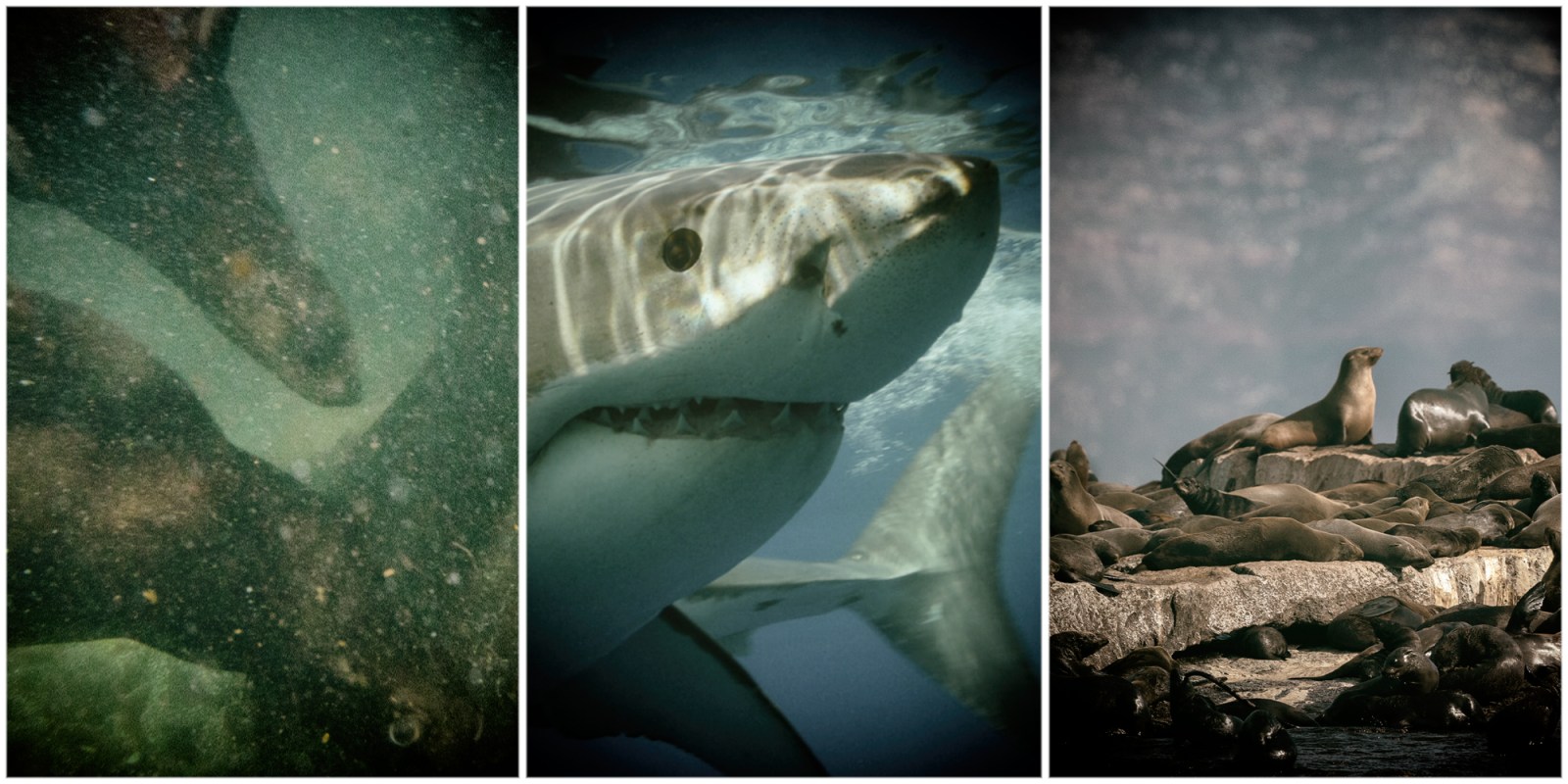 A marine scientist’s study of the interaction between white sharks and seals in Plettenberg Bay showed that seals are eight times more likely to survive if they are in a group and ‘mob’ the shark.

‘It is of the utmost importance for us to be able to understand how our natural world works — how we influence it, and how it influences us.”

These are the words of Dr Lacey Williams, head field specialist at the Oceans Research Institute in Mossel Bay, who spent more than 600 hours on the cliffs of the Robberg Nature Reserve in the winter of 2019, studying the interactions between white sharks and seals in an effort to learn more about this unique predator-prey ecology.

At the first Plett Marine Science Symposium recently, Williams shared the findings of her master’s dissertation which she is completing through the University of Miami. This was after a Plettenberg Bay local, Bruce Nobel — who had been observing and collecting footage of Plett’s resident winter white shark population for more than 20 years — brought his findings to her university’s attention.

Williams came to South Africa because the landscape and ecology of Plettenberg Bay is unique, and has put South Africa on the map as a white shark research hotspot.

“What’s happening here at Robberg is ecologically incredible. It’s unlike anywhere else that we’ve been able to see, especially for white sharks and seals,” said Williams, explaining that the landscape allows us to observe a highly migratory species close to shore in shallow water, which is typically very difficult for scientists to do.

Robberg’s cliffs that tower above the mostly clear, shallow waters allow people to view the predator-prey interactions in close proximity without human bias — us getting in the way and influencing the predation sequence — which can happen with boat observation.

“Our presence alone can change the game,” said Williams.

Additionally, South Africa is on the map because of the unique predator-prey dynamics between these two species and the prevalence of seal mobbing behaviour.

“It has been noticed elsewhere in the world, but nowhere else had it been observed with the intensity and the consistency … we saw here,” said Williams.

The typical anti-predatory behaviour we all know is the fight or flight response.

But Williams says there is one anti-predatory behaviour that doesn’t really make sense from an ecological point of view as the prey risks severe injury or death — and that is mobbing.

Williams explains that this behaviour, which occurs in a huge diversity of species such as fish, birds, mammals, insects and seals, is when prey will actively approach, harass and sometimes even attack their predator.

Williams and her research partner sat on the cliffs of Robberg from May to the end of July 2019 for more than 65 days for an average of 10 hours a day, viewing the interactions below. They also used a drone for aerial footage.

Over their 600 hours of observation, they were able to record 577 “targeting events” — when a shark or seal located and fixated on the presence of the other — of which 90 occasions were predatory (a shark attacked).

Out of the 90 recorded attacks, only five times was a white shark successful in catching a seal.

Williams’ study found that a seal was eight times less likely to be attacked or killed if it was in a mob group.

This wasn’t just a reactionary response. Williams found 70% of white sharks were mobbed before they attacked, and seals were three times less likely to be targeted and attacked if they were already mobbing the shark than if they were doing some other behaviour.

Why should we care about this?

Williams’ talk was the most sold-out presentation at the symposium, with Plett Tourism reporting that ticket numbers doubled after a fatal white shark attack earlier that week, on 28 June, on a Plett resident who was a long-distance swimmer.

Plett Tourism reported that rescue swimmers responded after an NSRI crew was alerted by eyewitnesses who reported the incident at Sanctuary Beach.

Patty Butterworth, CEO of Plett Tourism, said in a statement, “While Plettenberg Bay is renowned for its natural beauty, both on land and in the sea, we need to constantly remind ourselves that we are visitors in nature and need to exercise caution when out in the natural environment.”

Of the shark attack, Williams said: “It is a tragedy, but it is also an opportunity for us to really learn about what’s happening in our backyard so we can both protect ourselves, our loved ones and the natural environment within which we interact, and upon which we depend.”

Williams emphasised that her study was not connected to this recent shark attack, or to human and shark interactions, but did say the study of predation was important for us to understand.

“Predation is one of the most fundamental forces that shapes our natural world,” explained Williams during the talk. “It is an incredibly dynamic interaction — it directly impacts both predator and prey within a predation or predatory event.

Williams said we should care about and understand predatory behaviours because “we are of nature, not separate from it”.

She said we need to understand what a healthy ecosystem looks like and the impact of our influence so that we can protect our planet. Simultaneously, the health of our environment influences us.

“Our survival is intricately linked to the planet — we can’t survive without it,” said Williams, adding that this was particularly important in a town like Plettenberg Bay that relied on tourism for its economic sustainability.

Patty Butterworth said, “Tourism is a vital contributor to the revenue of the Plett economy. The industry creates thousands of jobs, helps guide the development of business needs in Bitou [municipality], and plants a sense of cultural exchange between guests and our community.

“The number of jobs created by tourism is significant, and the population is greatly affected by tourism. As one of the largest contributing industries, the revenue is invested in-town and residents experience an opportunity for economic growth.”

Williams reflected, “if that’s where people get their livelihoods, their identity, social traditions, not only economic value… It’s really important for us to nurture those things, and find a way that we can connect what’s going on in our backyard.”

Williams’ project may not have come about if it weren’t for citizen scientist Bruce Nobel, who took the time to observe what was going on in his natural environment.

Nobel, a founding member of the Plett White Shark Research Project, is a self-described naturalist, which Williams explained is someone who studies the natural world, but doesn’t necessarily use scientific terms or jargon.

“There’s not really much of a difference between our scientists and our naturalists. All it takes is for somebody to ask a question… to be curious.” DM/OBP