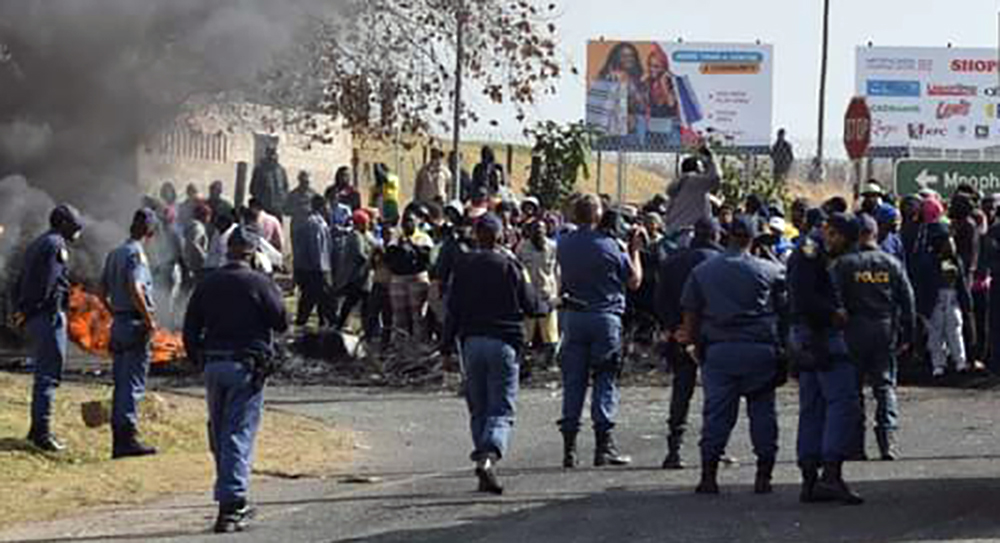 Residents of Mpophomeni have closed off Howick after being without electricity since last week Tuesday due to a blown transformer. Umngeni mayor Christopher Papas addressed the protesters on Tuesday, trying to calm the situation. (Photo: Supplied)

Residents of the KwaZulu-Natal town denied there was any political interference in their protest, while many businesses closed in a tense Howick CBD as fears mounted that the demonstration might spill into the town.

In a Facebook post on Tuesday, uMngeni mayor Chris Pappas wrote: “I would like to advise all businesses in the Howick and Merrivale area to please consider closing for the rest of the day. This is to avoid any potential injury or loss. Please update your security company. Please be vigilant.”

The protest began at the weekend when residents blocked the R617 towards Mpophomeni after a transformer blew up last week, leaving about 150 households in the Japan and Korea sections without power. The transformer blew because of an overload and protesters demanded that the uMngeni Municipality fix it before conducting an electricity meter audit.

A voice recording by Pappas made the rounds on social media on Monday, in which he said the protest was no longer about service delivery but was a politically motivated strike.

“We have been receiving information of ANC branch meetings where chairpersons and branch secretaries discuss this issue. We have evidence of councillors transporting people to the municipality as well as ANC-branded vehicles supporting the protest,” said Pappas in the recording.

He said it was clear the protest was no longer about people who had no electricity, adding that disciplinary action would be taken against councillors who were alleged to have been instigating the protest.

One resident, who asked not to be named, denied there was any political influence on the protest. He said they were joined on Monday by members of the ANC Youth League who had been at its regional elective conference in Mooi River over the weekend.

“They were on their way back from Mooi River and drove past Howick to find out what was happening with the protest. That was it and it doesn’t mean there was any interference. The mayor is now using this as an excuse,” said the resident.

He said residents had chosen 10 members to speak to the municipality and they did not include members of the ward committee or councillors.

“There is nothing wrong with the transformer at this moment. The municipality’s contractors cut off a cable connecting the electricity poles to the transformer. They are now calling for an audit before they will fix the transformer,” the resident alleged.

Pappas addressed the protesters at the entrance to Mphopomeni on Tuesday.

“The municipality is more than willing, we have the infrastructure and we want to restore electricity, but we need to conduct a meter audit first,” Pappas told The Witness.

He said there were two groups from the protest, which included about 70 residents who are currently without electricity. Those affected told him they wanted the municipality to do the audit and fix the transformer, while the other group wanted the transformer fixed first, he said.

Pappas said the audit would take about eight hours and at least four to repair the transformer.

“The longer people keep going with this protest, the longer they’ll stay without electricity. But this is really a small issue that could be addressed very quickly,” he added.

After the briefing a group blocked the entrance to Howick where there was a large police and security presence.

The ANC in the Moses Mabhida Region called on Pappas to desist from playing politics with serious issues affecting people and conducting witch hunts to lay blame elsewhere.

Regional spokesperson Njabulo Mtolo said in a statement: “The ANC in the Moses Mabhida Region is annoyed, but also not surprised, by the petty politicking of [Pappas], who has chosen to deflect blame from the mess that his municipality created… This matter requires urgent attention to avoid further escalation, as frustration is propagating by the day.”

He condemned the use of violence and the destruction of property.

The DA said the protests were orchestrated by the ANC.

DA KwaZulu-Natal leader Francois Rodgers said they had seen photographic evidence of an ANC vehicle that was part of the protest and a video of ANC members handing out food parcels to the protesters.

“As a result of this protest, services in the municipality have been brought to a standstill… It is infuriating that the ANC does not want to accept defeat and would rather disrupt service delivery out of their desperate need for power,” said Rodgers.

The party would be writing to KZN premier Sihle Zikalala in his capacity as the ANC’s provincial chairperson to request that he gets his comrades in line.

Later in the afternoon, a truck was burnt on the R617 near Mpophomeni close to the Sasol garage.

According to various sources, one of its two trailers was burnt. The truck had been travelling towards Merrivale.

“Emergency services arrived while one trailer was burning. We managed to separate the burning trailer from the rest of the truck,” said one source.

By 7pm, members of the POP had dispersed the crowd and other emergency services were still monitoring the scene.

Pappas said there were also threats to other community facilities. DM

First published by The Witness.