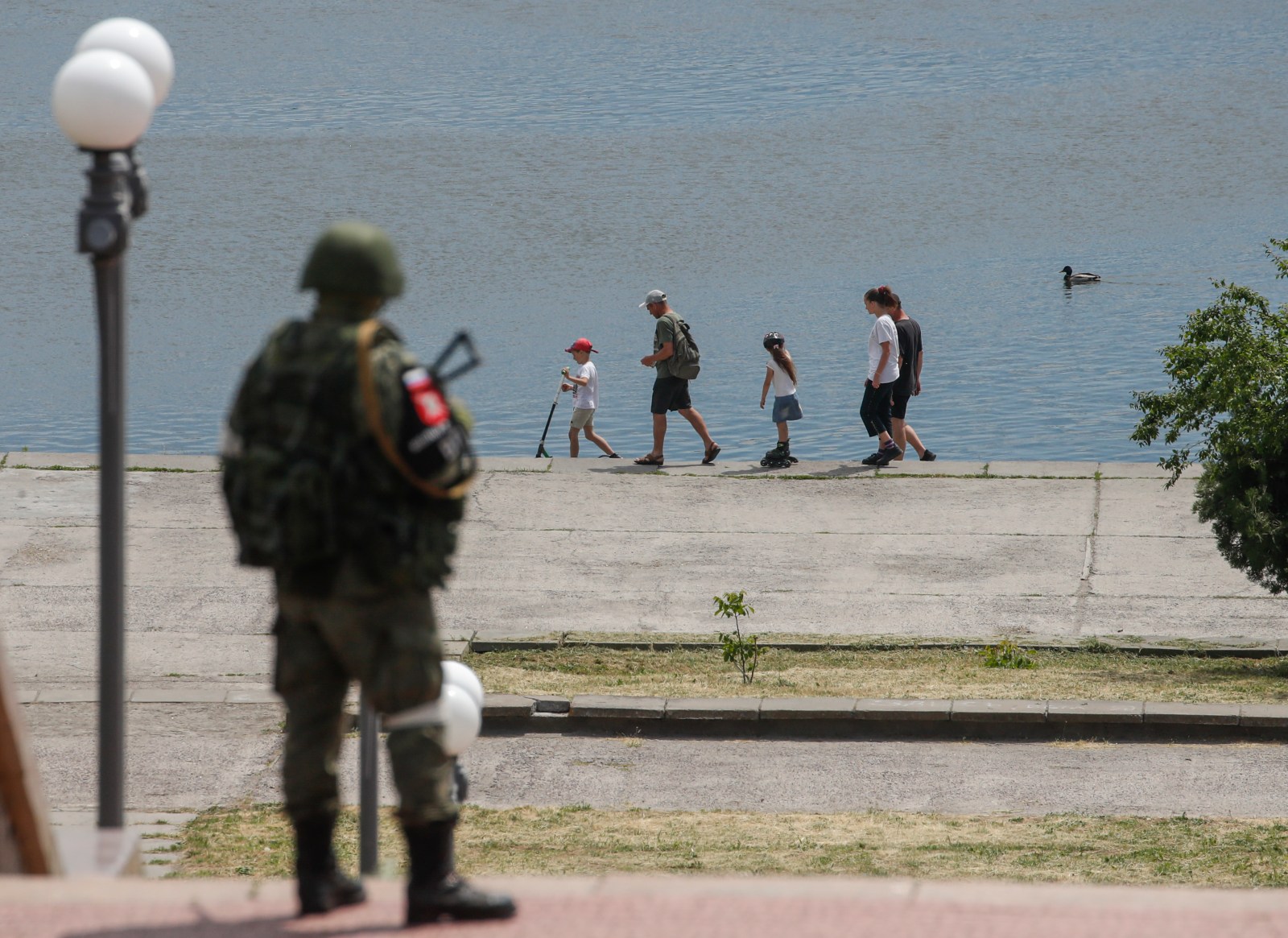 A Russian serviceman standing guard as a family walks on a promenade along the Dnipro River in Kherson, Ukraine, 20 May 2022. EPA-EFE/SERGEI ILNITSKY

KYIV, July 12 (Reuters) - Ukraine said on Tuesday it had carried out a successful long-range rocket strike against Russian forces in southern Ukraine, territory it says it is planning to retake in a counter-offensive using hundreds of thousands of troops.

According to Ukraine, the strike hit an ammunition dump in the town of Nova Kakhovka in the Kherson region and killed 52 Russians. It came after Washington supplied Ukraine with HIMARS mobile artillery systems which Kyiv says its forces are starting to use with ever greater efficacy.

A Russian-installed official in Kherson gave a different version. He said at least seven people had been killed in the Ukrainian attack and that civilians and civilian infrastructure had been hit.

Reuters could not independently verify the battlefield accounts.

The area Ukraine struck is one that Russian forces seized after launching on Feb. 24 what Moscow called “a special military operation” and is of strategic importance with Black Sea access, a once thriving agricultural industry, and a location just north of Russian-annexed Crimea.

Ukrainian government officials have spoken of efforts to marshal up to 1 million troops and of their aim to recapture southern parts of the country under Russian control which they have said are important for economic and political reasons.

“Based on the results of our rocket and artillery units, the enemy lost 5️2, an Msta-B howitzer, a mortar, and seven armoured and other vehicles, as well as an ammunition depot in Nova Kakhovka,” Ukraine’s southern military command said in statement.

Images released by Russian state media showed a wasteland covered in rubble and the remains of buildings.

An official from the Russian-installed local administration said that Ukraine had used HIMARS missiles in the strike and that they had destroyed warehouses containing saltpetre, a chemical compound which can be used to make fertilizer or gunpowder, resulting in a large explosion.

The Ukrainian Defence Ministry did not immediately respond a request for comment about the kind of weapon used.

Vladimir Leontyev, head of the Russia-installed Kakhovka District military-civilian administration, was cited by Russia’s TASS news agency as saying that at least seven people had been killed in the attack and around 60 wounded.

“There are still many people under the rubble. The injured are being taken to the hospital, but many people are blocked in their apartments and houses,” Leontyev was quoted by TASS as saying.

He was also cited as saying that warehouses, shops, a pharmacy, gas stations and a church had been hit.

Russia has accused Ukraine of shelling its own people in territory of which it has lost control. Ukraine says it evacuates as many people as possible from areas seized by Russian forces in what it and the West have cast as an unreconstructed attempted imperial-style land grab by Moscow.

Kyiv and the West say Russia’s own strikes have been indiscriminate, killing civilians and levelling city districts.

Moscow denies targeting civilians but many Ukrainian cities, towns and villages have been left in ruins as Europe’s biggest conflict since World War Two grinds towards the five month mark.

Russia has tried to introduce the rouble in Kherson and is offering Russian passports to locals who will take them.

Russian-installed officials say they also plan to hold a referendum on the region becoming part of Russia but have not yet set a date.

Ukraine’s deputy prime minister on Sunday urged civilians in Kherson to urgently evacuate as Ukraine’s armed forces were preparing a counter-attack there.

“It’s clear there will be fighting, there will be artillery shelling… and we therefore urge (people) to evacuate urgently,” Deputy Prime Minister Iryna Vereshchuk said on national television.

She said she could not say when exactly the counter-offensive would happen.

“I know for sure that there should not be women and children there, and that they should not become human shields,” she said.

Ukraine is itself bracing for what it expects will be a massive new Russian offensive in the east of the country where Moscow says it is determined to take control of all of the industrial Donbas region.

Russian forces have for weeks been shelling parts of the Donetsk region, which is part of Donbas, and are expected to launch an assault on the eastern city of Sloviansk.

After Russia failed to quickly take Ukraine’s capital Kyiv, its forces turned to the Donbas, whose two provinces Donetsk and Luhansk have been partly controlled by Russian-backed separatists since 2014.

Russia now controls all of the Luhansk region and some of the Donetsk region. Russian President Vladimir Putin aims to hand control of the Donbas to the separatists whom Kyiv says are Russian-controlled puppets, a charge they deny.