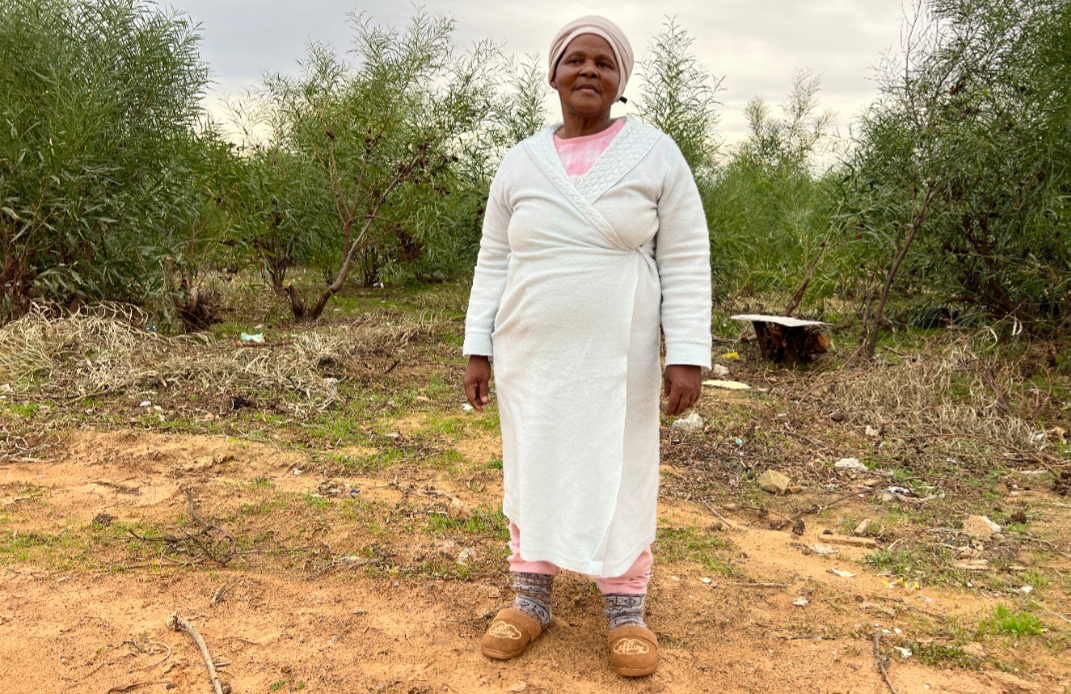 Sarah Fabie founded the Chatsworth Advice and Development office in 2015. She says they have had several meetings with the HDA to ask when the houses they were promised years ago, will be built. (Photo: Peter Luhanga)

The Housing Development Agency bought 700 hectares of land near Malmesbury just outside Cape Town eight years ago. But the agency says it was only officially appointed as implementing agent for the project in March this year.

Residents of Chatsworth just outside Cape Town say they plan to take the Housing Development Agency (HDA) to court for failing to keep a promise to build them houses.

In June 2014 the HDA, a public sector development agency that falls under the national Department of Human Settlements, bought 700 hectares of land from Servcon Housing Solutions Proprietary Limited for R5-million. The land was initially earmarked for housing and subsistence farming.

Now eight years later, residents are worried the houses may never be built. Part of the land has already been donated to another state department and a group of people have erected structures on a portion of the land.

Sarah Fabie, 60, founded the Chatsworth Advice and Development office in 2015 and volunteers to help the community. She says they have had several meetings with the HDA, which have been fruitless. She says their next step is to get a lawyer for an application to compel the agency to start the “long overdue” project.

“We’re fed-up and tired. We are tired of waiting and living in shacks during winter.”

According to Fabie, a private company had submitted a proposal to the HDA to build subsidised housing for eligible beneficiaries. HDA rejected this, she says.

She says when residents went back to the HDA offices in Cape Town last year, they were told that the agency did not have money.

Theresa Hindley, 46, lives with her five children and three grandchildren. She says she has been waiting for a subsidised house since 2001.

Hindley is unemployed and survives on child support grants for her children. She rents a house from a local church for R1,000 a month. She says they are left with about R370 to cover other household needs. “Our children are growing. It is very frustrating. Eventually, when we get these homes, they won’t be able to accommodate our families.”

She says the HDA is giving them the runaround by not giving clear answers about the project.

Swartland Municipality’s acting municipal manager, Jo-Ann Krieger, confirmed that a portion of the HDA land “has been included in the urban edge of Chatsworth for future housing projects”.

Since 2014, the Swartland Municipality made various attempts to obtain the necessary power of attorney from the HDA to take the planned future housing project forward but was unsuccessful, says Krieger. She says a school was built on part of the land and was already transferred to the Department of Public Works and Transport.

“The municipality can only initiate projects when we receive the necessary funding from the Department of Human Settlements. Housing is done according to the housing pipeline which is updated annually and approved by the mayoral committee and council,” said Krieger.

HDA spokesperson Katlego Moselakgomo confirmed that 2.5 hectares of land was donated to the Department Public Works in March 2021 for the construction of a school.

“Since acquiring the land in 2014, critical work has been completed to prepare it for development. This, among others, include, conducting planning and engineering studies, assessment planning and designs for the approval by the municipality.”

Moselakgomo did not answer further questions about the project or how many people stood to benefit, but said, “Beneficiaries have been profiled and there are ongoing community engagements. An implementation plan was signed in 2018 between the Swartland Municipality, Western Cape Provincial Department of Human Settlements and the HDA. On 17 May 2022, the HDA was officially appointed as an implementing agent for the project.”

He said the HDA had a “vested interest in improving the living conditions of beneficiaries, especially the impoverished”.

“HDA is equally concerned and extremely sympathises with the residents who are earmarked to benefit from this project. It is crucial to note that the mandate of the HDA does not allow the HDA to build houses independently of municipalities.

“The agency is mandated to develop as and when instructed, funded and permitted by the municipalities and provinces,” he said. DM