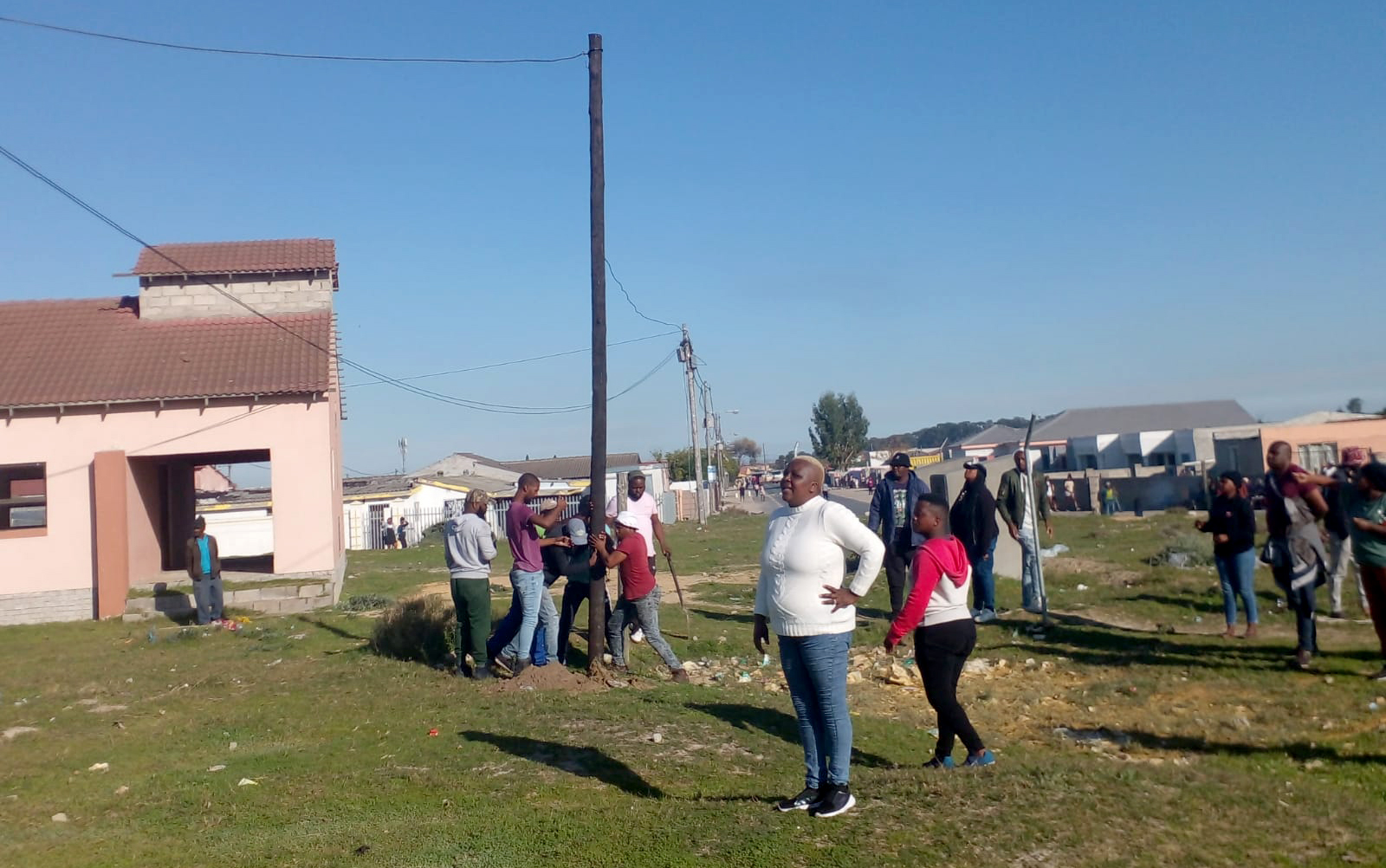 Mfuleni homeowners remove a pole with illegal connections during a protest on Friday. Before the City of Cape Town restored power on Saturday, the area had been dark for about a month. (Photo: Siphokazi Mnyobe)

The City of Cape Town removed the illegal connections on Saturday and restored power after a month-long outage.

Homeowners and shack dwellers in Mfuleni, Cape Town clashed late on Friday over illegal connections in the area. Dozens of residents of RDP houses took to the streets to protest. They burnt tyres and removed some electricity poles, demanding that the City of Cape Town resolve the issue. They say they have been without power for about a month.

The RDP homeowners, most of whom are pensioners, blame people living in nearby Phola Park informal settlement for illegal connections that overload the system. According to residents, more than 110 houses in Mfuleni are affected.

Nontembiso Daweti, 61, supported the protest. She uses an electric wheelchair to get around after her left leg was amputated in 2019. She needs electricity to charge her wheelchair.

Patrice Maake, a community leader, said that when they reported the issue to the City, they were told that the outage can only be fixed once the illegal connections are removed.

Maake said the homeowners tried to negotiate with the shack dwellers but to no avail. “After failing to reason with them, we then phoned the City to come and disconnect the electricity,” he said.

When the City didn’t show up for a week, homeowners decided to take matters into their own hands on Friday, he said. Around 4pm, Phola Park residents came to confront the homeowners trying to remove their illegal connections. Clashes became physical and the metro police were called.

According to Maake, City workers arrived at 10am on Saturday and removed the illegal connections. Electricity was also restored to the houses. He said many residents came out to ensure that the City workers were safe and not disturbed while working.

Asanda Bhalinyanga, from Phola Park, said, “We tried to ask the City to provide us with services but they say that our settlement is not recognised. We are also human and need services too.”

Phola Park in Mfuleni was established at the start of the pandemic in 2020, when many people were retrenched from work and could not pay rent.

When GroundUp visited the area on Sunday, leaders from Phola Park and Mfuleni homeowners were discussing the issue.

Beverley van Reenen, Mayoral Committee Member for Energy, said that the City was made aware of the area outage on Thursday 7 July and restored electricity on Sunday 10 July.