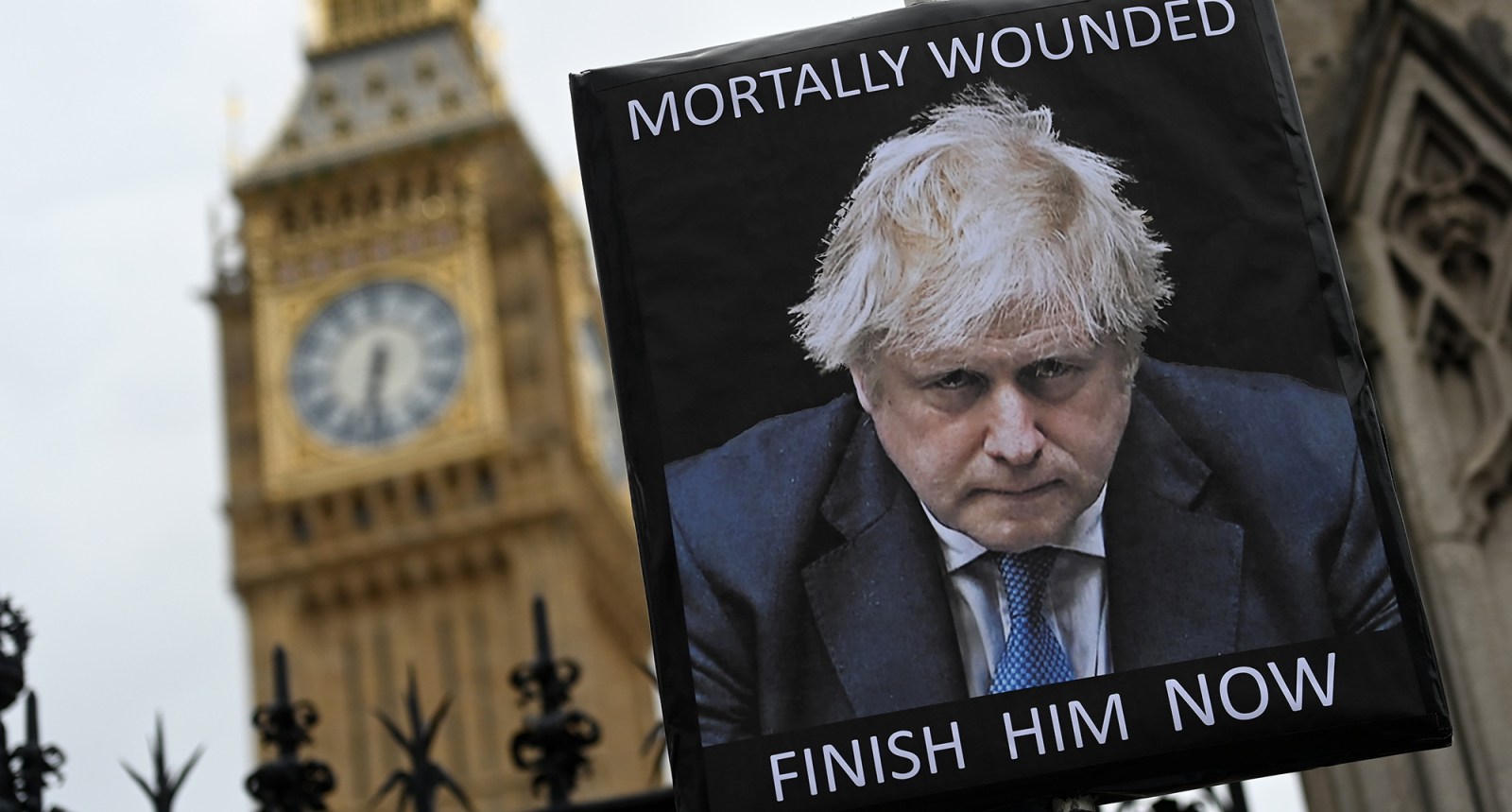 A protester holds up an anti-Boris Johnson placard outside parliament in London on 6 June 2022. (Photo: EPA-EFE / Andy Rain)

Reading about the decline of British Prime Minister Boris Johnson brought to mind a song I have almost forgotten, by The O’Jays, with perhaps the longest title in history. The song is called, ‘Now that we’ve found love, what are we going to do with it?’ It struck me that Johnson’s decline was written into his success in much the same way.

Boris Johnson’s success was defined by his longstanding desire to pull the UK out of the European Union. But once he found “love”, he didn’t know what to do with it. And oddly enough, that tells you quite a lot about the United Kingdom, its foibles, its economic history and its future — and his.

I arrived as an Anglophonic South African, convinced I was familiar with at least the bare outlines of British language and society. I could not have been more wrong. You travel to learn how ignorant you are, and never is that more true when you actually live in a foreign country.

There were all kinds of undercurrents I just didn’t understand. These included Fabianism — the real causes of the UK’s industrial decline in the 1960s and 70s — and the unique oddities of its class structure, among many other things.

For a country that produced Samuel Johnson, who famously said “patriotism is the last refuge of the scoundrel”, the country is madly patriotic.

I didn’t even understand the weather.

Just one illustration. Like some other foreign correspondents, I had an office in the Financial Times building. After a few months, I decided to go and say “hi” to the people on my floor, many of whom worked in an open-plan office for the analysis section of the FT. One person I marched up to almost jumped out of his skin when I greeted him.

“It’s so kind of you to come and say hello because…” and then he faltered, “… mostly, people are introduced.”

I realised in an instant I had broken some deep, entrenched, unwritten social rule, and that he had just “Britished” me. Often, when British people of a certain class say, “We really must have you around,” what they actually mean is, “We would like it very much to never, ever have you around, or even see you again.”

When he said, “It’s so kind of you to say ‘hello’,” what he meant was, “go away and never come back”. To understand the difference, you have to understand the culture, and for an easygoing foreigner from the colonies, this was clearly going to be tougher than I thought.

Despite the general personal coldness compared to South African bonhomie, I gradually came to know and love the UK in ways I didn’t expect.

My neighbour in the office, renowned economist Samuel Brittan, exploded in laughter when he heard me relating to a colleague on the phone through the thin office walls that we were currently enduring “a season they describe here as ‘spring’ ”.

Supper parties were always a joy: erudite guests, a deep culture of reading and knowledge, and humour always to the fore. Oddly, I found toff Brits and working-class Brits just fabulous — the striving upper-middle, less so.

I left the UK enormously sad. If you live in a foreign country, you carry your nationality everywhere. It becomes, first and foremost, part of your identity. But after a time, people recognise you are beyond your outward characterisation, and you they.

But I also left a tiny bit worried about the UK. That seems like an odd sensation for someone from a country so much more messed up than the sixth biggest economy in the world, where unemployment is barely a feature.

But even then, the undercurrents were visible; the UK just did not know where it wanted to go and what it wanted to be: towards Europe or away from Europe; towards Thatcherism or away from it; towards reindustrialisation or towards the services sector; more modern or more traditional.

Fast-forward to now, and you can see where it went. The FT’s economics editor Martin Wolf puts it succinctly, citing the Resolution Foundation in its latest Living Standards Audit.

In other words, there was stagnation all round.

Real median household disposable incomes since the financial crisis, adjusted for purchasing power, fell by 2% in the UK: over the same period they rose 34% in France, 27% in Germany and 23% in the Netherlands, Wolf’s FT piece records.

There was lots of innovation and renewal; life generally in the UK is fabulous compared with the chaotic and bumbling SA. But it wasn’t quite running on all cylinders.

The key problem was, and remains, the decline in UK productivity, which caused a creeping sense of dislocation and disorientation that culminated in Brexit.

But having achieved Brexit, Johnson’s flibbertigibbet politics didn’t provide a clear economic philosophical direction. He raised taxes as a recession approached. He was reduced to trying to renegotiate the treaty he originally negotiated, partly, I suspect, to try to rekindle past passions. And the British ruling class was not going to go there again.

Johnson’s Brexit slogan was, “take back control”, but when he got it, he didn’t know what to do with it.

That, at least partly, is because Brexit may be socially desirable for a bare majority of Brits — but I continue to believe its economic logic is deeply flawed.

Sad, but there you go. BM/DM