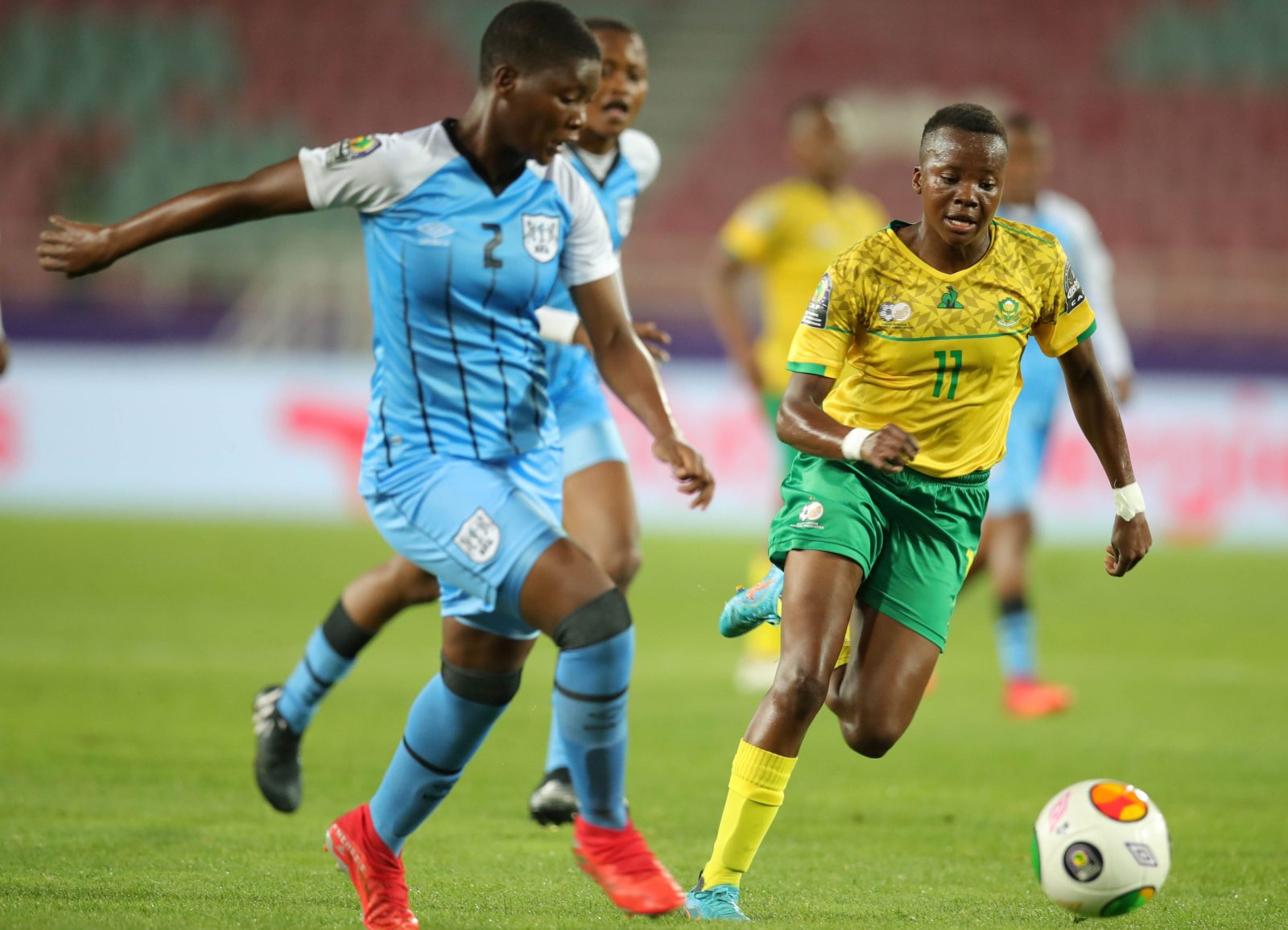 Banyana Banyana will have to forge forward without star striker Thembi Kgatlana in pursuit of a maiden Women’s Africa Cup of Nations crown. The diminutive forward suffered a ruptured Achilles tendon in the team’s final group game.

South Africa’s seamless conquering of the Women’s Africa Cup of Nations (Wafcon) group stage, following a 1-0 win over Botswana on Sunday, was soured by a tournament-ending injury to star striker Thembi Kgatlana.

The former Atletico Madrid forward — who recently signed for the US side Racing Louisville — sustained a ruptured Achilles tendon in Banyana Banyana’s Group C match against neighbours Botswana and had to be stretchered off the pitch in the 69th minute.

After undergoing an MRI scan, the extent of the injury was confirmed on Monday.

“Thembi Kgatlana sustained a complete rupture of the left Achilles tendon against Botswana, which was confirmed by the MRI scan this morning. Unfortunately, she will be out for the whole Wafcon 2022 tournament. She is due for an operation back home in South Africa,” Banyana Banyana physician Rodney Mokoka told Safa.net on Monday.

“Post-operation healing will be guided by certain milestones that we have to achieve. Of course, a comprehensive functional rehabilitation programme will be in place for her. But the quicker we achieve those milestones, the quicker she will be back on the field of play.”

She is expected to return to contact training after a minimum of 20 weeks, though full recovery from the injury can take six months, if not slightly longer.

The loss of the fleet-footed 26-year-old forward — who finished the previous edition (in 2018) as the top goal scorer — will be felt by manager Desiree Ellis and her charges.

Despite not reaching her peak in Morocco as yet, she had already netted once as Banyana ended the group phase with nine points from a possible nine. They beat Burundi, Botswana and defending champions Nigeria.

Her problematic pace had paved the way for her teammates to exploit the open spaces created by her mesmerising runs.

The South Africans will be breathing a sigh of relief though, considering the fact that they did not also lose Kgatlana’s partner in defence terrorism, Jermaine Seoposenwe.

Mokoka provided an update on the 28-year-old’s knock after she too did not finish the game against Botswana due to injury.

“Jermaine Seoposenwe sustained a soft tissue injury of the ankle against Botswana. She is doing well and will be available for training tomorrow [Tuesday],” stated Mokoka.

Top of the pile

Before learning of their loss of Kgatlana, Banyana Banyana had cemented their spot at the summit of their group following the win — which saw them finish ahead of title-holders Nigeria.

Ellis’s charges dominated the game against their southern African rivals from the start, with 18-year-old Nthabiseng Majiya scoring the winning goal — her first for the senior side.

Despite their defeat to South Africa, Botswana still made it through to the quarterfinals for the first time, as one of the two best third-placed teams.

Banyana Banyana face Tunisia in the last-eight stage, where they will be looking to maintain their perfect record. The two sides clash on Thursday.

Other quarterfinal clashes will see reigning African champions Nigeria battle with Cameroon, also on Thursday, while on Wednesday, Zambia face Senegal, and hosts Morocco tackle the Mares of Botswana. DM