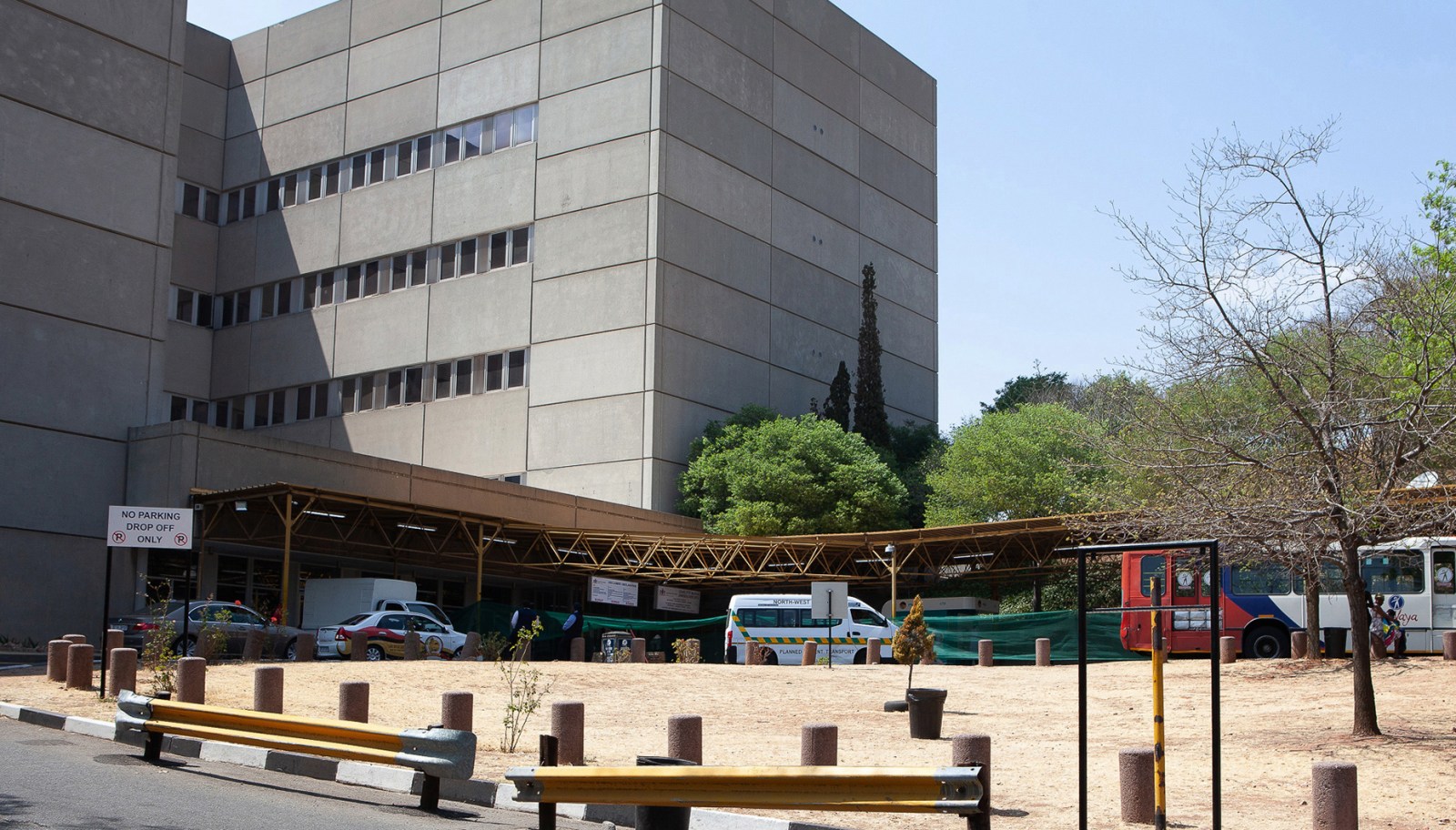 A doctor at Charlotte Maxeke Johannesburg Academic Hospital has told Maverick Citizen that the forensic investigation by police, who went on site within hours of the fire, suggests that it was set deliberately. Fingerprints have also been found.

The second fire that broke out at Charlotte Maxeke Johannesburg Academic Hospital (CMJAH) on 5 July has led to renewed questions about progress and plans for the repair and rehabilitation of the 1,100-bed public hospital that is vital to health care and training.

The fire broke out in the parking lot beneath the hospital, which is the same place as the fire of 16 April 2021. This time, it was quickly contained and did not require any evacuation of patients from the hospital.

However, according to a doctor who works there, the forensic investigation by police, who went on site within hours of the fire, suggests that it was set deliberately. He says fingerprints were found near the site of the fire.

The doctor also questioned why there were still flammable materials stored in the area.

A second source who is involved in repairs to the hospital also believes that the fire was started on purpose, saying suspicion as to its cause is rife, although he speculated that it could also have been created by a homeless person sheltering in the hospital.

The possibility that the fire may have been started deliberately reinforces speculation that the continued thefts from the hospital, despite the presence of security guards, and now the latest fire, are linked to people disgruntled by not having received tenders for the hospital’s repair, a problem acknowledged by Health Minister Joe Phaahla earlier this year.

Yet in mid-June a doctor reported to Maverick Citizen that there is still “ongoing theft” at the hospital. “Copper piping is being stolen and affecting oxygen supply and suctioning affecting patient care in particular [paediatric] surgery.”

Hospital CEO Gladys Bogoshi failed to respond to our questions. However, Motalatale Modiba, head of communications at the Gauteng Department of Health, told us that the cause of the fire “is subject to police enquiry. They would be better placed to shed light on this”.

Future of the hospital

The fire has led to renewed questions about the future of the hospital. Maverick Citizen has been told that the forensic report into the first fire has now been completed, but not made public.

However, we were informed by a senior official in the national Health Department, who asked not to be named, that: “The estimated damage is huge and there is significant structural damage to Blocks 4/5. There is a need to do remedial work to prevent the building collapsing. Currently temporary propping is in place. That will take until the end 2023 to secure – but at least the funds are secured.”

Although the hospital is now said to be back at 85% functionality and has resumed outpatient services, departments and staff morale remain affected. A doctor told us: “CMJAH is a freezer. Current heating in blocks A and E is being undertaken by Gift of Givers. The issue of heating for the rest of the hospital blocks is still a problem. There appears to be no definitive plan. No allocation of budget. This is really affecting patient care.

“The current focus from DBSA [Development Bank of SA] and DoH is the fire requirements but the actual maintenance by Gauteng Department of Infrastructure Development [GDID] is absent.”

However, since a proclamation in February by Premier David Makhura, the GDID is no longer responsible for the hospital, so it is unclear where responsibility falls for day to day maintenance. We have been told that the Gauteng DOH would like this function to be transferred back to the GDID – but the latter doesn’t want it.

Meanwhile, the doctor says, “I am in utter despair at the lack of substance input and speed at getting what needs to be done and get us back to full functionality.”

In the face of these unsatisfactory conditions for both patients and health care workers (no parking within the hospital has led to an increase in car theft) and the need for major repairs and renovations there is a stalemate between hospital management, staff and the government over what to do in the interim.

An official in the national Health Department puts it this way: “The entire building must be retrofitted for fire protection. That has to be done by decanting block by block. Question is how to decant. Options are: internal over five years or external over half that time. The latter means moving elsewhere and the staff and clinicians appear not to support this.”

Three proposals are on the table:

In this context, there is also the increasingly urgent question of what will happen to Gauteng’s only dental school and hospital which is also located at CMJAH.

Meanwhile, health care continues to suffer and may get even worse. We were told “the CT scan, cath lab, linear accelerators, etc are all at end of life and need to be replaced. But squeezing all out of the diminished budget requires ‘reprioritisation’ which means something else suffers. There is no easy solution.” DM/MC