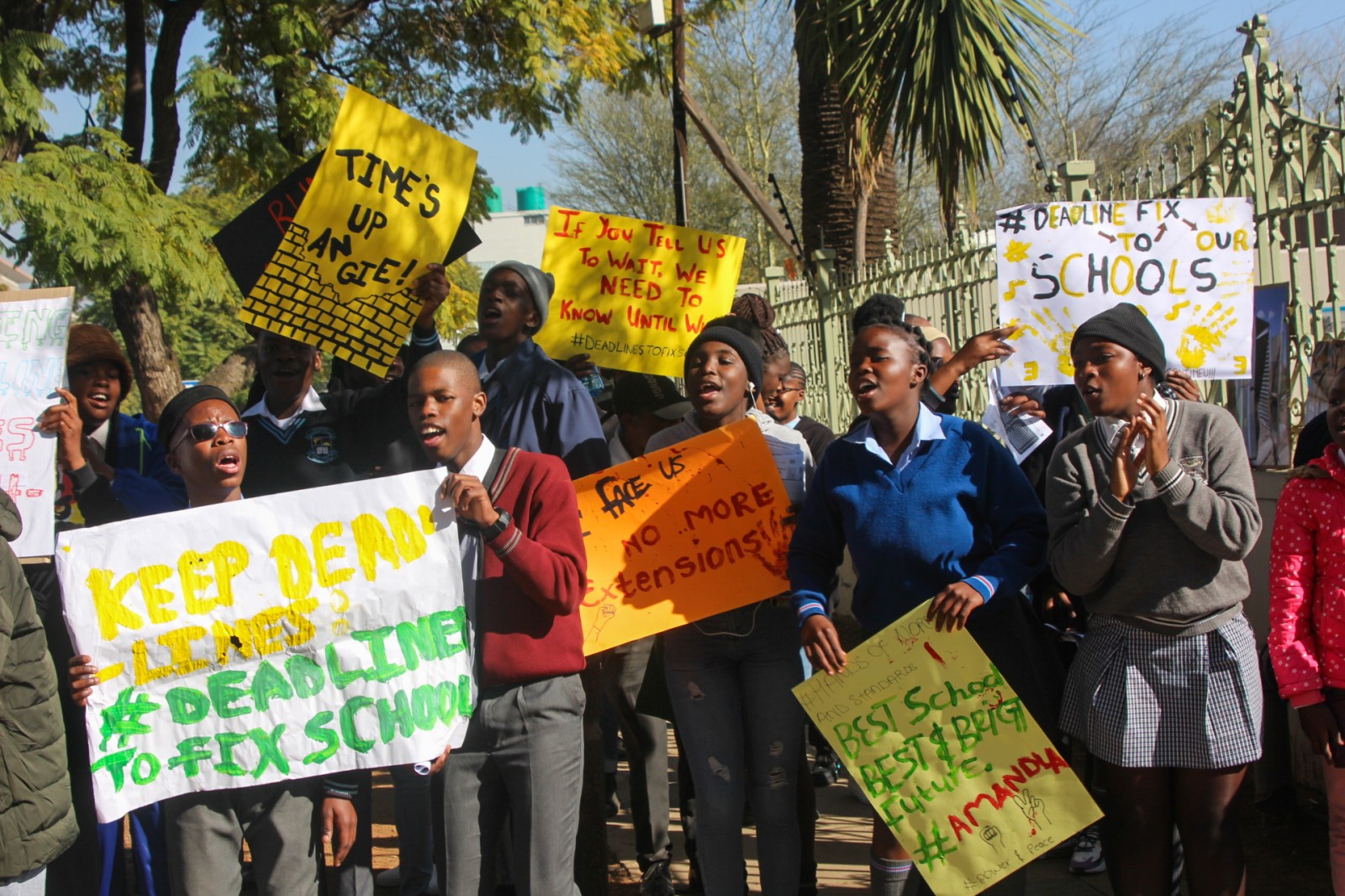 Learners protested outside the Department of Basic Education in Pretoria on Friday against proposed amendments to the minimum norms and standards for public school infrastructure. (Photo: Magnificent Mndebele)

Department says learners’ memo will be considered along with other public comments on its proposed amendments.

About 150 Equal Education (EE) members and learners from over 50 schools protested outside the Department of Basic Education office in Pretoria on Friday. They were objecting to proposed amendments to the minimum norms and standards for public school infrastructure.

Under new draft amendments, deadlines have been removed for when government must eradicate pit latrines and provide classrooms and basic services such as water and electricity.

Last week, EE and Equal Education Law Centre (EELC) wrote a letter to the department condemning its proposed changes to the Norms and Standards for Public School Infrastructure regulations. After the outcry that followed, the department extended the deadline for public comment from 10 to 31 July. The original deadline fell within the school holiday period.

“Without the urgency and accountability that is demanded by the deadlines, poor and working-class communities will never know when their schools will be fixed,” said EE Jay-Dee Cyster in a statement.

In a memorandum on Friday, the learners asked the department to use plain and simple language in the regulations so that the public could easily understand it.

EE is also demanding that the department immediately eradicate pit toilets at all schools.

Head of research at EE Hopolang Selebalo said, “The biggest struggle is at rural schools. These are the most under-resourced schools. We know that pit latrines exist predominantly in KwaZulu-Natal, Eastern Cape and Limpopo.”

The first deadline was to ensure that schools had water, electricity, sanitation and safe infrastructure by 29 November 2016. This deadline was missed by several provincial education departments.

Schools were then meant to have fences, telephones and internet access by 29 November 2020 but this is still not the case at many schools.

Selebalo questioned the timing of the department’s proposal to scrap the deadlines because 2023 is the next deadline for the provision of libraries and laboratories in schools. It is unlikely that the department would meet this deadline.

“To remove those safeguards in the law is regressive and does not take the best interest of a child to heart,” said Selebalo.

EE also wants the education minister and the provincial MEC to host public meetings by no later than 29 November to discuss the progress of eradicating poor school infrastructure backlogs.

The memo was received by department spokesperson Elijah Mhlanga. “We will take it to the committee that is processing all the public comments received between now and 31 July,” he said. DM