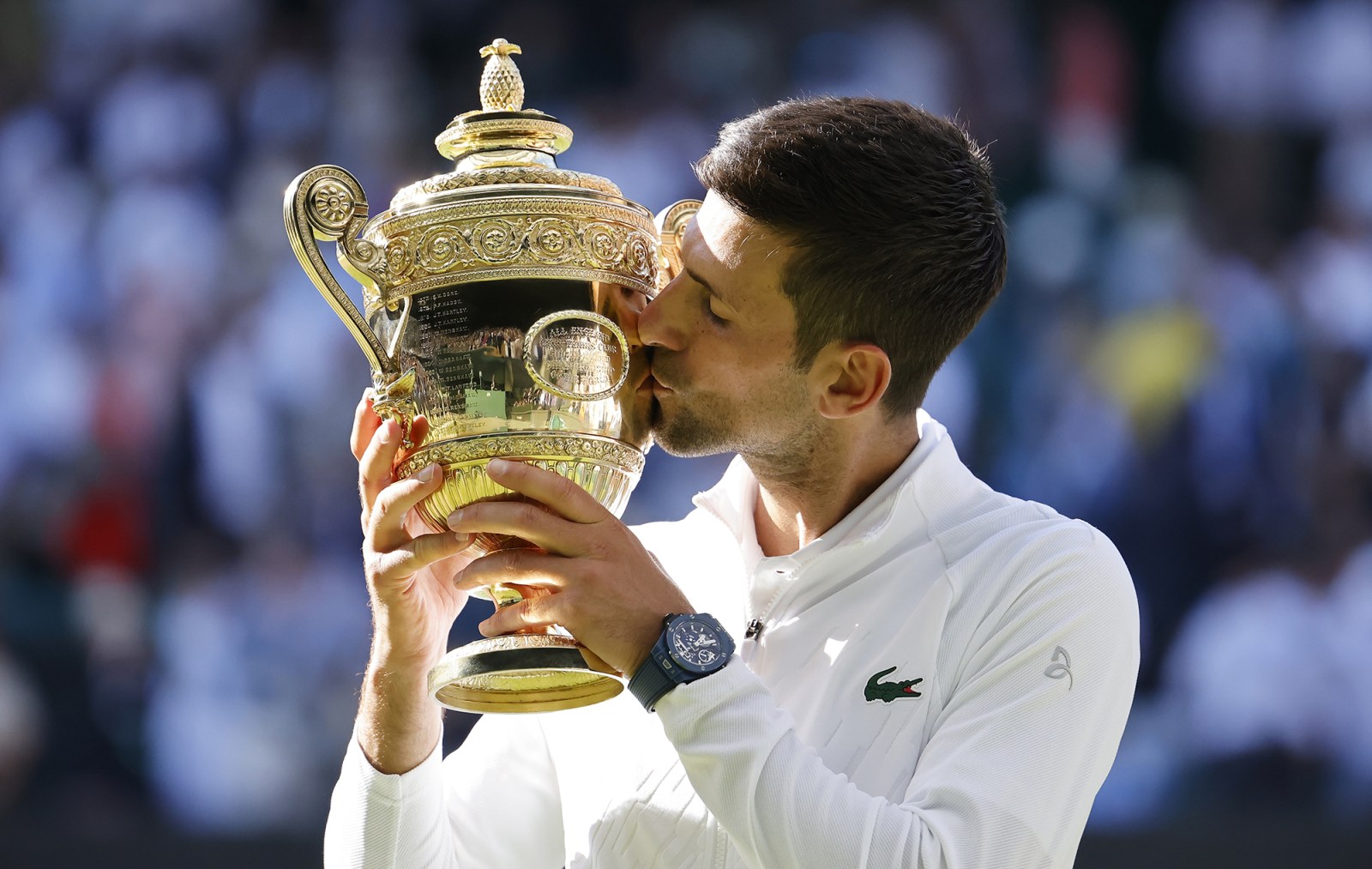 Novak Djokovic of Serbia kisses the trophy after winning the men's final against Nick Kyrgios of Australia at the Wimbledon Championships in Wimbledon, Britain, on 10 July 2022. (Photo: EPA-EFE / NEIL HALL)

Novak Djokovic stayed serene amid a frenzied atmosphere to tame fiery Australian Nick Kyrgios in an engrossing final on Sunday, lifting a seventh Wimbledon trophy and taking his Grand Slam title count to 21.

Rallying from a set down, Djokovic exhibited ice-cool nerves in sweltering conditions to win 4-6, 6-3, 6-4, 7-6(3) for his fourth consecutive trophy at the grasscourt major to close in on Rafael Nadal’s record 22 Grand Slam titles.

After finishing 2021 one win short of a rare calendar-year Grand Slam, Djokovic’s season has not panned out exactly as he would have envisaged after being deported from Melbourne ahead of the Australian Open and then losing to Nadal in the French Open quarterfinals.

His refusal to be vaccinated against Covid-19 could prevent him from entering the United States to compete at the year’s final Grand Slam in New York, but the air of uncertainty had no bearing on his continuing love affair with the lawns at the All England Club.

After completing his win in just over three hours, Djokovic raised his arms to the sky and after shaking hands with Kyrgios, he bent down to pluck some grass from the famous old court and tasted it before running up to his player’s box to kickstart the celebrations.

“It always has been and always will be the most special tournament in my heart, the one that motivated me, inspired me to start playing tennis in a small mountain resort in Serbia where my parents used to run a restaurant,” said an emotional Djokovic, who was also celebrating his eighth wedding anniversary with wife Jelena on Sunday.

“My first image of tennis was grass and Wimbledon. I always dreamed of coming here, just playing in this court, and then realising the childhood dream of winning this trophy.

“Every single time it gets more meaningful and more special, so I’m very blessed and very thankful to be standing here with the trophy.”

Competing in a men’s record 32nd major final on a sun-bathed Centre Court, the 35-year-old was facing an unseeded opponent who had never been beyond the quarterfinals at a Grand Slam before this fortnight.

In their only two previous meetings – both in 2017 – Djokovic did not win a set, did not once break the Kyrgios serve and had only a single breakpoint opportunity.

Five years later, it was another sublime serving performance from the Australian during the early stages.

A couple of well-disguised drop shots from Kyrgios helped him set up two breakpoints in the fifth game and a double fault from Djokovic brought up the first break of serve, which was enough for Kyrgios to take the set.

A focused Kyrgios, however, did not forget to entertain when he could. There was an underarm serve and he hit a return on the half volley between his legs to delight the crowd.

No one, however, expected it to be an easy straight-sets match with Djokovic having not lost at the All England Club since retiring injured from his 2017 quarterfinal against Czech Tomas Berdych.

Djokovic’s delivery went up a gear in the second set and the Serb slowly but surely started demonstrating why he is considered the best returner in the sport.

Once the level of the Kyrgios serve dropped in the second set, Djokovic was ready to pounce.

With Djokovic serving to level the match at one set apiece, however, Kyrgios raised his game to set up four breakpoints, only for the top seed to save all of them and convert his first set point to leave the Australian fuming.

Furious with himself, Kyrgios poured out his frustrations in a lengthy rant aimed at his box and the Australian maverick was his usual hot-headed self during the third set as Djokovic started playing pristine tennis.

He got broken from 40-love up in the ninth game and continued swearing and screaming, earning himself a code violation for obscene language.

The drama across the net, however, did not have any impact on Djokovic’s focus.

After holding serve to win the third set, he calmly collected his bag and left the court, leaving his opponent sitting on his chair and shaking his head in frustration.

After both players failed to create a breakpoint in the fourth set, Djokovic dominated the tiebreaker and sealed the Championship on his third match point for his 28th consecutive Wimbledon win when Kyrgios found the net on a return.

Kyrgios admits it felt “ridiculous” for a basketball-mad guy from Canberra to be playing a Wimbledon final but after losing to Djokovic he feels like he belongs.

Many thought the controversial world number 40 had blown his immense talent and that he would never better his quarterfinal run as a teenaged debutant in 2014 when he beat Nadal.

While there have been trademark antics during the fortnight and Kyrgios continues to divide opinion over whether he is a force for good in tennis, the 27-year-old Australian proved he is not far away from landing a Grand Slam.

“It’s taken me almost 10 years in my career to finally get to the point of playing for a Grand Slam [final] and coming up short,” Kyrgios told reporters.

“I feel like if I had won that Grand Slam, I think I would have lacked a bit of motivation, to be honest. I would have kind of achieved the greatest pinnacle of what you can achieve in tennis.

“I played a Slam final against one of the greatest of all time, and I was right there.

“I came out in the first set and I looked like I was the one who had played in a lot of finals. I thought I dealt with the pressure pretty well.” Reuters/DM