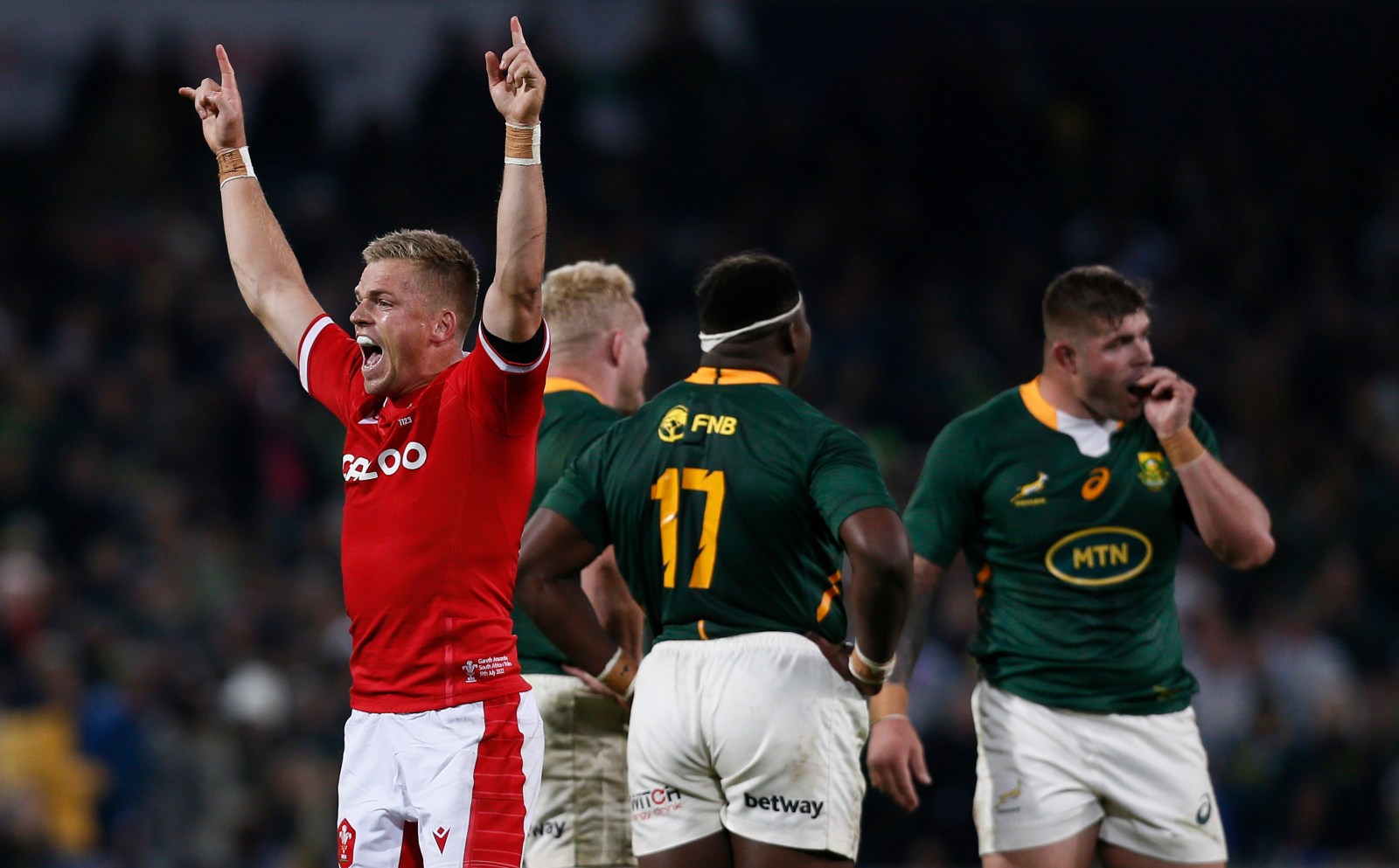 Wales made history with their first win against the Springboks in South Africa on Saturday.

The three-match series will go down to a decider in Cape Town after Wales made history by winning their first ever-Test in South Africa at their 12th attempt.

A 78th-minute try from replacement wing Josh Adams and a touchline conversion from replacement flyhalf Gareth Anscombe gave Wales a 13-12 win and atoned for last week’s injury-time defeat at Loftus.

Wales were unlucky to lose the first Test 32-29 and were perhaps lucky to win this one after the Boks dominated for the most part. But South Africa’s failure to score a try, for the first time in a Test since Dublin in 2017, and the first time on home soil since 2016, was a huge factor in the loss.

The home team led 12-3 on the hour mark and looked to be stretching away as Wales showed no real attacking intent and were on the back foot for much of the first 60 minutes.

The visitors’ lineout struggled with three skew throws and a couple of poaches by the home team, and yet the Boks still couldn’t close it out.

But Wales defended superbly throughout and despite their lack of attacking intent for much of the game, appeared to be waiting for their moment. They knew the Bok bench was not the same feared unit of a week earlier and the visitors upped their intent in the final quarter.

When lock Alun Wyn Jones was sin-binned in the 58th minute for an infringement close to his own tryline, it seemed that Wales were destined for another brave loss.

But they managed the period with 14-men well while the Boks inexplicably lost their composure in a crucial seven-minute period where they conceded four penalties in a row.

Anscombe was only successful with one shot at goal during that period, but it changed the momentum of the match. Wales were suddenly on the ascendancy and the Boks looked rattled.

Coach Jacques Nienaber’s decision to make 19 changes to the match 23 from the first Test and hand out six new cps in the name of building depth, backfired. It was always a risky ploy not having the famed ‘bomb squad’ to close out the match.

Whether losing the Test in the search for answers as to which players will make the final cut for next year’s World Cup will only be revealed in time. It’s difficult to lay blame for the loss on one player, while it’s also difficult to conclude that any single player – especially among the debutants and inexperienced returnees – was exceptional.

It was a game of fine margins that the Boks could – and should have – won, which would change the narrative of Nienaber’s decision. Instead, the coach will have to live with the outcome of his experiment and ensure that the world champions atone in the decider in Cape Town.

The only two survivors of the ‘bomb squad’ were hooker Malcolm Marx and prop Vincent Koch. The rest tried manfully with 35-year-old debutant Deon Fourie making an immediate impact with a string carry that led to a penalty, but the subs didn’t have the same impact.

It might not have mattered had the Bok starting XV been more clinical with the dominance they had. Wales were on the back foot and never even came close to scoring until the final five minutes. But they also never lost their composure and despite missing three kicks at goal, were good enough to win.

It was a war of attrition in the first half with Wales refusing to play any rugby. Launching aerial bombs on the callow Bok back three was the tactic of choice and it worked in as much as the Boks were unable to win much clean ball in that area.

The breakdown contest was also fierce with excellent Welsh openside Tommy Reffell making a nuisance of himself at almost every ruck. He won two penalties in the first half and slowed Bok ball consistently.

Nienaber’s experimental team was always likely to come under pressure, yet it didn’t appear to lack the cohesion many expected. It was the Boks that looked more ambitious and constructed some promising attacking moves.

Early on, the Boks manipulated space on the right where fullback Warrick Gelant and debutant wing Kurt-Lee Arendse combined well. Only desperate Wales defence stopped the Boks from scoring.

Bok skipper Handre Pollard was prominent on two occasions with good runs down the left touchline, but Wales’ cover was always enough to stunt the Bok attacks.

And when hooker Joseph Dweba charged down the right touchline after a Gelant turnover and quick hands from Arendse, the Boks created another half chance. But Wales skipper Dan Biggar made a crucial tackle on Dweba, despite a vicious fend from the front-rower.

And with Reffell in tow, looking to pounce on the mere whiff of a turnover, the teams largely neutralised each other in an entertaining, but sterile opening 40 minutes.

It was left to Biggar and Pollard to slot a penalty each. Biggar’s kick after only a minute as Wales won a penalty when Du Toit sealed the ball after Gelant had collected the opening kick of the match.

Pollard’s successful kick only five minutes later, was the result of the same infringement from Wales. Referee Angus Gardener was at least consistent.

After the break Pollard stretched the Boks lead with three more kicks at goal. The scoreboard was moving in the right direction, but in small increments. The fact that the Boks couldn’t breach the red line and deliver the killer blow ensured that Wales’ confidence never dipped.

They were always within touching distance of winning and that belief saw them secure a famous win and set up a series decider in Cape Town next week. DM