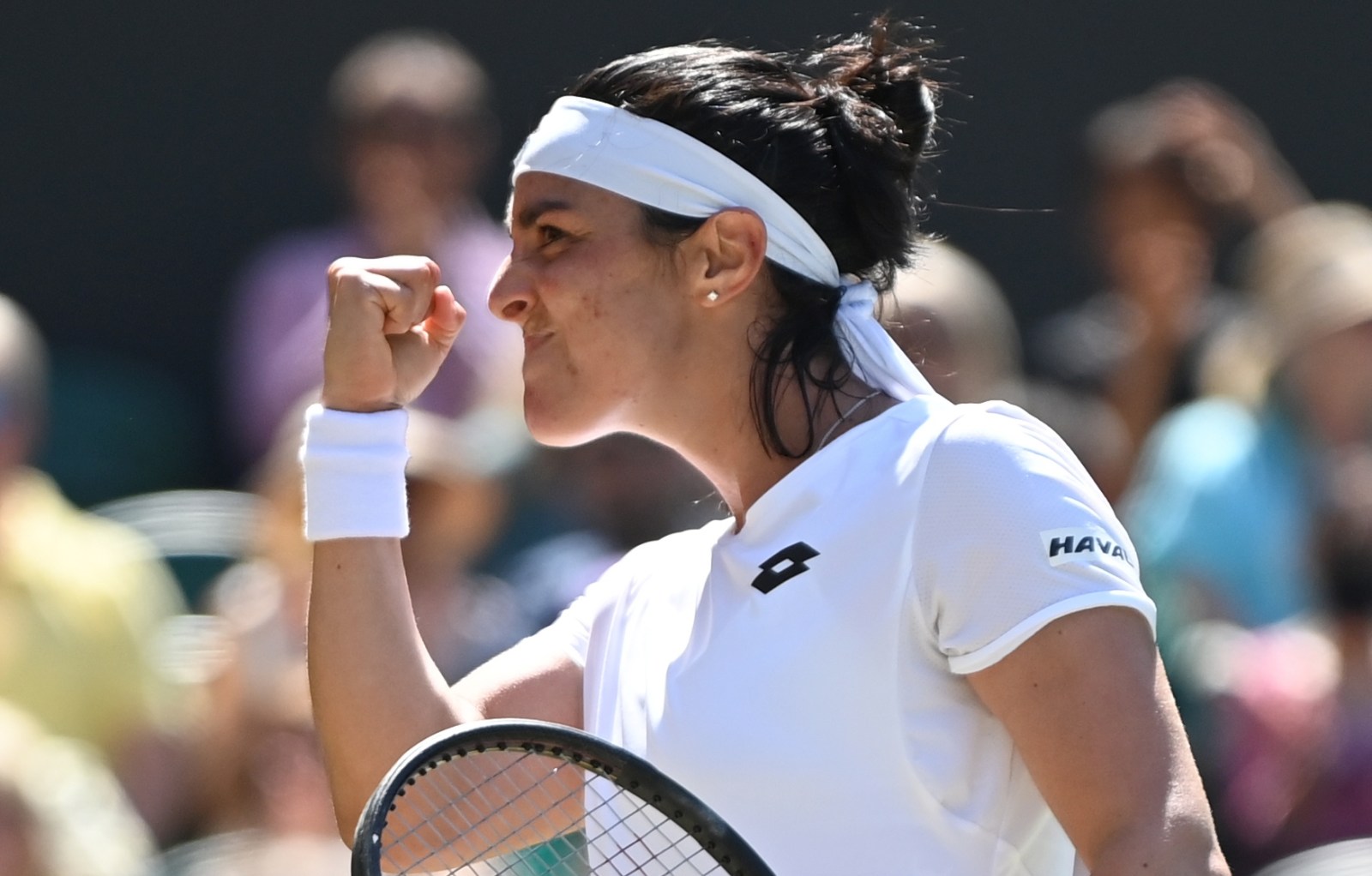 Ons Jabeur of Tunisia reacts in the women's semifinal match against Tatjana Maria of Germany at the Wimbledon Championships, in Wimbledon, Britain, on 7 July 2022. (Photo: EPA-EFE / Neil Hall)

Tunisia’s Ons Jabeur lifted the spirits of an entire continent when she became the first Arab and first African woman to reach the Wimbledon women’s final since 1960 with a rousing 6-2, 3-6, 6-1 victory over her barbecue buddy Tatjana Maria on Thursday.

Before she stepped on court, US great Billie Jean King said Jabeur was “using tennis as a platform to help Tunisia, help Africa and help Arabs”, and the 27-year-old did just that as she finally ended the remarkable run of mother-of-two Maria.

Maria (34) was forced to save three break points in the opening game but was unable to prolong that resistance as she dropped serve in the third and seventh games before Jabeur sealed the opening set when the German smacked a backhand long.

However, the 103rd-ranked Maria refused to hand victory on a platter to an opponent she calls “family” as she broke for a 3-1 lead in the second and held on to that advantage to draw level when the third seed sliced a backhand into the net.

But Jabeur finally lived up to her world number two billing to run away with the third set and set up a final showdown with Russian-born Kazakh 17th-seed Elena Rybakina.

There was little in Rybakina’s understated celebration — the clenched fist and slow stroll to the net — to suggest she had produced the performance of her life on Thursday to demolish former champion Simona Halep and reach the Wimbledon final.

Yet by romping into Saturday’s showpiece, her maiden Grand Slam final, with a 6-3, 6-3 win that was as clinical as it was brutal, she set up a showdown with Jabeur that few would have predicted at the tournament’s outset.

Halep was caught in the crosshairs of an onslaught from the Russian-born Kazakh, who pummelled the Romanian with rasping serves and savage forehands.

Halep, the champion in 2019 who had not dropped a set at the All England Club since the second round of that tournament, did not help her cause with a string of double faults that handed Rybakina chances at key moments.

Yet the 17th seed needed little assistance, as she became the first player from Kazakhstan to reach a Grand Slam final.

“I don’t know how to describe it, but it was really, really good,” the 23-year-old said after wrapping up victory to become the youngest Wimbledon finalist since Garbine Muguruza in 2015.

“Usually, of course, I have ups and downs, and it comes from the nerves. But I think today I was mentally prepared and I did everything that I could and it was an amazing match.”

The Centre Court crowd had willed Halep to get into the contest, but the 16th seed was a clear second-best from the start as she attempted to go toe-to-toe from the back of the court.

“Somehow I think I gave her the perfect ball to do her game, to feel comfortable on court,” said Halep. “But, as I said, all the credit to her. She deserved to win today with the way I played.”

Rybakina just had too much power and aggression for the Romanian, who wilted under the pressure.

The opening point of the match had set the tone for the remainder of the clash as Rybakina powered down a service winner, before holding serve to love and immediately breaking to take control.

Halep looked under pressure throughout the opening set, failing to create a breakpoint, while Rybakina pounced on a series of tame second serves from the 30-year-old Romanian and looked a constant menace.

Cool as ice, Rybakina, who would not have been allowed to play at this year’s Wimbledon had she not switched allegiance from Russia in 2018, brought up three set points with another searing 189km/h ace and took the opener when Halep sent a forehand wide.

The All England Club, which organises the Grand Slam, and the Lawn Tennis Association banned players from Russia and Belarus at tournaments in Britain following Russia’s invasion of Ukraine.

Halep, who missed the 2020 edition of Wimbledon due to injury and contemplated retirement last year, looked like a rejuvenated player as she stormed into the semifinals.

But after her run of winning 21 consecutive sets at Wimbledon was brought to an end, she never really looked like fighting back.

Halep’s three double faults in the first game of the second set saw Rybakina snatch an immediate break and while the Romanian clawed her way back to level the contest at 2-2, parity was short-lived.

Another double fault allowed Rybakina to break again for 3-2 and four games later the Romanian was at it again as her ninth double fault opened the door for the Kazakh to seal the deal with a backhand return down the line on match point.

“Simona’s a great champion and we had many tough matches before,” Rybakina said. “I was really focused today and I’m really happy with my performance because I think that I played really solid.” DM