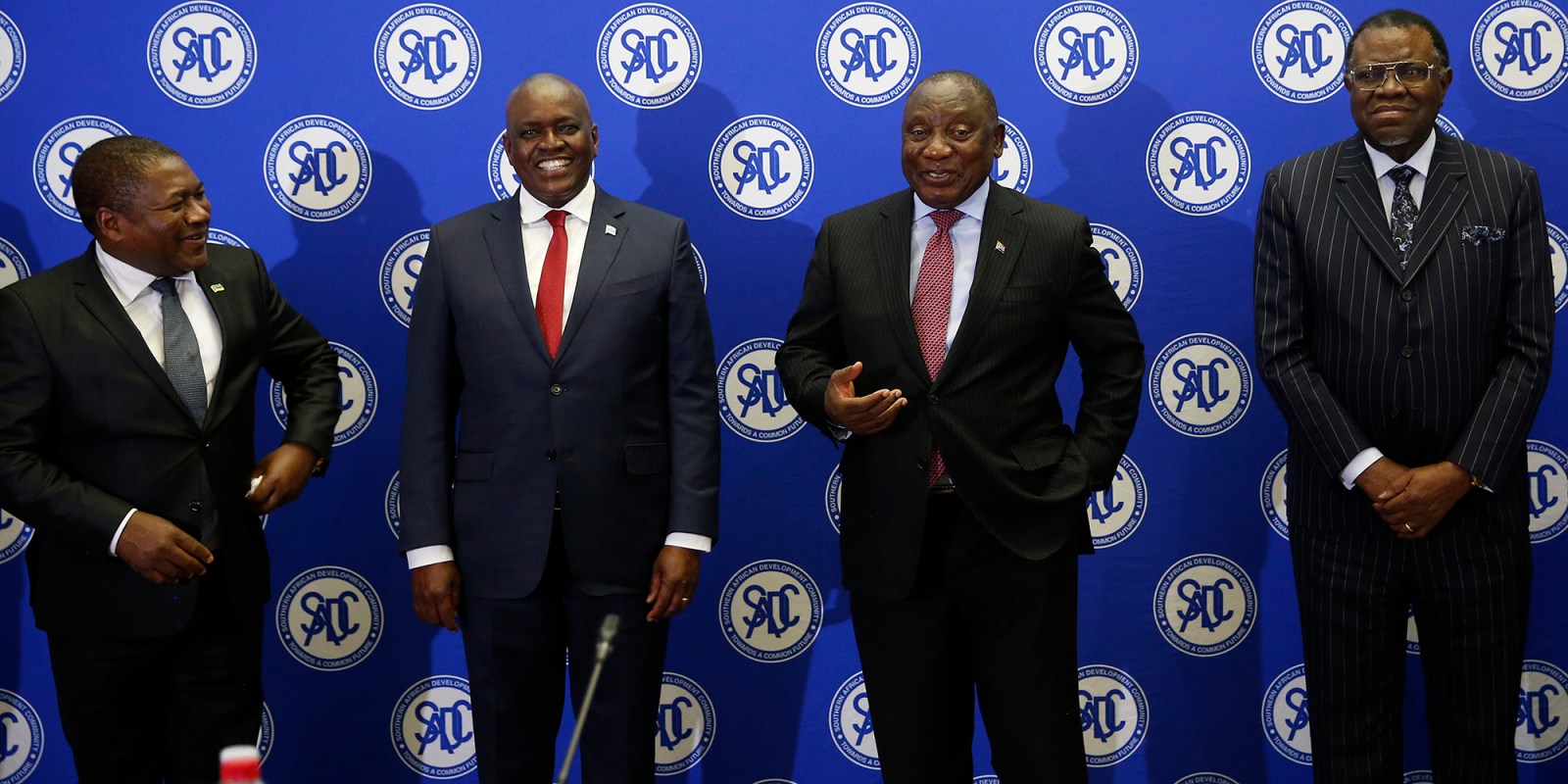 Regional leaders will hold a summit in South Africa, chaired by President Cyril Ramaphosa, this month to address the festering crisis in Eswatini by trying to launch a national political dialogue.

Eswatini’s King Mswati has finally agreed to attend the extraordinary summit of the security organ of the Southern African Development Community (SADC) on 21 July, after keeping the organisers guessing for weeks about his presence, sources said.

The Department of International Relations and Security Cooperation announced the summit on Thursday. It did not say what was on the agenda, but sources told Daily Maverick the main item would be the proposed national political dialogue in Eswatini. They said it had been unclear for some time if Mswati and his government would attend, but that this had now been confirmed.

The summit will be chaired by President Cyril Ramaphosa as South Africa currently chairs SADC’s security organ. The other two current members of the organ troika are Namibia and Botswana and so their presidents are also scheduled to attend.

SADC intervened in the crisis in the country last year after unprecedented violent protests in June which left scores of protesters dead and much infrastructure destroyed or damaged. After another flare-up of violence in October, Ramaphosa visited Eswatini in November to meet Mswati and announced afterwards that the king had agreed to launch a national political dialogue.

But then a long delay ensued and in the meanwhile, the political and security climate has deteriorated, with violent crackdowns by security forces on protesters and more recently, violent retaliation against police officers, including the burning of their homes — apparently by some pro-democracy forces.

There are deep differences in Eswatini about the structure of a national dialogue. Mswati and his government appear to be envisaging it as taking place in the “Sibaya” format, in other words as a traditional gathering where the monarch addresses his people. But the democratic opposition says this would be a monologue rather than a dialogue. They point to the Sibaya which Mswati called after the violence last June where he delivered a speech and then departed without taking questions from the Swazi people.

Thulani Maseko, a human rights lawyer who chairs the Multistakeholders Forum that has been coordinating political and civil society demands for a fully inclusive national political dialogue, welcomed the announcement of the SADC summit on Thursday.

“It is good news that SADC is meeting. It is equally encouraging that the Swaziland government has agreed to attend,” he said.

“The SADC facilitated process has to move forward. It cannot be held to ransom forever.” Maseko said SADC’s intervention was necessary to arrest the violence; where members of the police service were being targeted and the general political environment had become more volatile.

He hoped that SADC would persuade Mswati to agree on a dialogue process with firm timelines that could be shared with the leaders of the pro-democracy movement and on the need to create a political climate for talks to begin in earnest.

“It is clear that the government envisages some dialogue through Sibaya. That is unworkable and not acceptable to the mass democratic movement. All the King can do through his unilateral Sibaya meeting would be to announce his commitment to an all-inclusive political process, not to seek to manipulate and control it.

“We implore SADC not to depart from its own regional values and principles on democracy, the rule of law and their respect for all human rights in Swaziland.”

But whether SADC will be up to persuading Mswati to conduct a national political dialogue in a format that is acceptable to the democratic opposition, is uncertain. Meanwhile, the political and security climate necessary for a political dialogue has been deteriorating, with clampdowns on protesters and increasing attacks on security forces.

Last week the Eswatini government designated exiled journalist Zweli Martin Dlamini and his South Africa-based online publication, Swaziland News, as terrorist entities because of his reporting on the growing political violence in the country. The government accused him of publishing articles “that instigate violence, the burning of public and state property, the seizure of state power and overthrow of lawful government”.

The government order accused Dlamini of threatening the killing of police officers, saying that it was “worth noting that there had been recent shooting of officers by unknown gunmen”.

Swaziland News recently reported that a police officer had been shot “allegedly by members of the pro-democracy Swaziland International Solidarity Forces that defends civilians from ‘bloodthirsty’ King Mswati’s security forces”. This was shortly after another two policemen had been shot.

Dlamini wrote: “The Solidarity Forces had vowed to deal with police officers after Mswati demonstrated reluctance in engaging in a political dialogue and subsequently unleashed the police and soldiers to shoot and kill dozens of civilians merely for demanding democratic reforms.” DM