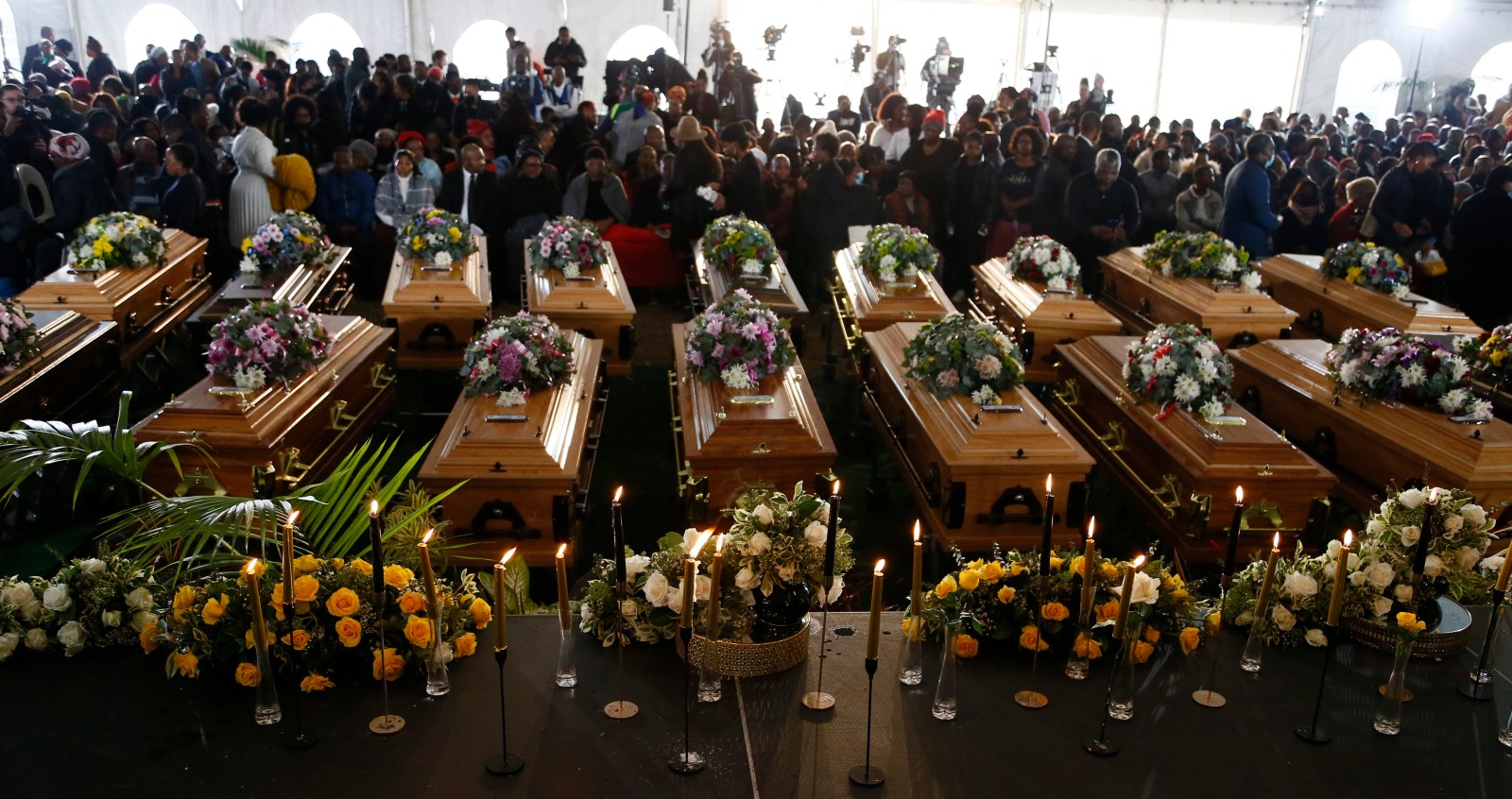 19 Coffins that will be used for the funerals of some of the young people who died at the Enyobeni Tavern in East London on 26 June were present at the mass funeral held at Scenery Park Sport Stadium. Two of the children had already been buried. The 19 will later be buried in private ceremonies. (Photo: Felix Dlangamandla / Daily Maverick)

President Cyril Ramaphosa has called for a national debate on lifting the legal drinking age to 21 as the Liquor Traders Association admitted that they failed the community in an emotional funeral service for 21 young people who died at a tavern in Scenery Park, East London on 26 June.

A spokesperson for the Liquor Traders Association in the Eastern Cape has admitted that they have failed their community at a mass funeral for 21 young people, who died on 26 June at Enyobeni Tavern in East London in the Eastern Cape. At the same funeral, President Cyril Ramaphosa called for a national debate on whether the legal drinking age must be lifted from 18 to 21.

Family, friends and residents of Scenery Park said their farewells to 19 of the 21 teenagers who died at Enyobeni Tavern last week in the early hours of 26 June 2022 during the mass funeral service laced with emotion and humour at the Scenery Park Sport Field on Wednesday.

The group, the youngest of whom was only 13, died under mysterious circumstances at the tavern in Scenery Park. The mass funeral, held on Wednesday, was attended by Ramaphosa, the Minister of Police Bheki Cele and Eastern Cape Premier Oscar Mabuyane were among several dignitaries, that included representatives of the Central Drug Authority.

“Tavern owners failed to play their part,” the Association of Liquor Traders’ Lucky Ntimane told mourners. “A 13-year old and a tavern should not be mentioned in the same sentence,” he said. “It ends today… We need to take action.

“We are willing to work with the government to contribute to doing better in our society and we won’t allow our kids to die at the taverns. We need to find a way to nurture our kids outside of taverns,” he said.

Ntimane said the death of the 21 teenagers was unacceptable. “The time has come to take action,” he said.

Ramaphosa, in his speech also called for a national debate on raising the legal drinking age to 21.

“Our hearts are broken. We lost our children,” he said, later adding, “A tavern is not a place where young teenagers should be going to.” But he said he understood that they had wanted a place to meet.

“Blame must be laid at the feet of those who make money selling alcohol to [underaged children],” Ramaphosa said. “Children should not have been allowed in this place. In my view, it was outside of the law…These are liquor establishments putting profits ahead of the lives of young people…. This is a moment for us as a nation to confront this issue. We will draw a line.”

The President has called on the province to urgently establish local drug action committees in their communities and to also address underage drinking.

Mabuyane said the tragedy could have been avoided.

Scores of the family members and friends who attended the service could not hold back the tears when 19 coffins arrived at the tent. Many sobbed and some fainted. Paramedics had to be called in after some mourners collapsed.

The 19 coffins in the tent were empty because of an agreement with the families, according to Avbob provincial manager Ellaine Gogo.

The families of two of the victims had already made funeral arrangements. Oyena Ngoloyi was buried on Tuesday while Inamandla Wexu was buried on Wednesday morning in Butterworth.

Following the mass funeral one of the victims, Nathi Ngqoza, will be laid to rest in Mount Coke while Thembinkosi Silwane will also be buried in Haven Hills on Wednesday.

Speaking at the service, Eastern Cape health department deputy director-general Dr Litha Matiwane said the pathology tests were conducted on the day of the victims’ deaths.

“The pathologist found 17 bodies at Enyobeni tavern and the other bodies were found in hospital. Postmortems were done on the same afternoon of the incident and samples were taken to Cape Town for toxicology,” he said.

Matiwane said as of today, the provincial health deparment, the South African Police Services and the toxicologists in Cape Town are in contact but no results have yet been disclosed.

“The forensic team ruled out that the deaths were as a result of a stampede. In conjunction with the police, we are committed to be in contact with families once the results are out,” he said.

Matiwane said the clothes of the victims were taken to the laboratory in Cape Town for further analysis.

The Eastern Cape Department of Transport MEC Weziwe Tikana-Gxothiwe said on the day of the incident, when they arrived at the scene there were 17 bodies. “One was found in Frere Hospital, two at Empilweni Clinic and one died on the way to hospital,” she said. DM