Suspect in Chicago-area parade shooting due in court to... 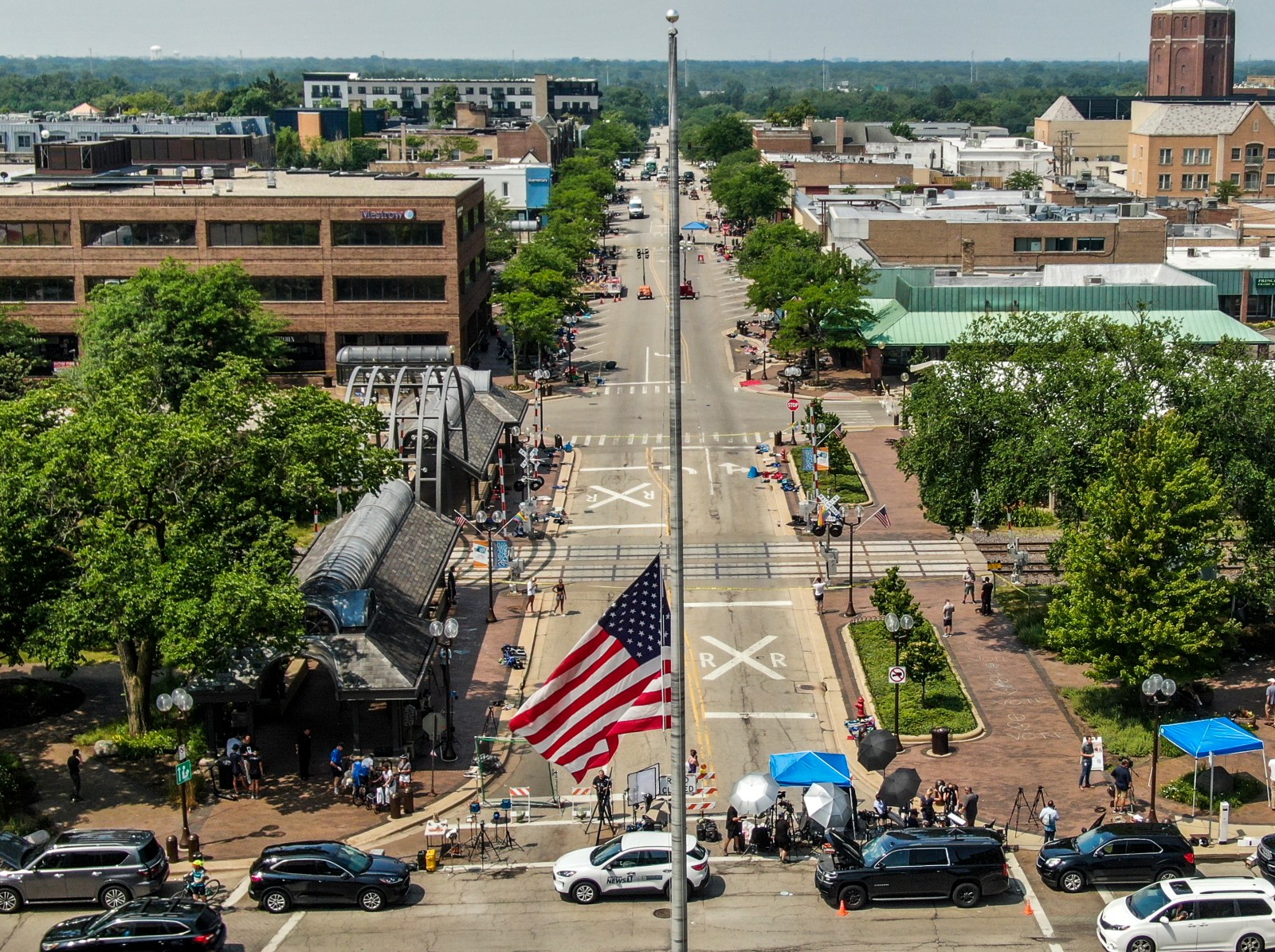 An American flag at half staff as law enforcement officers continue investigating the scene of a mass shooting at a 4th of July celebration and parade in Highland Park, Illinois, USA, 05 July 2022. EPA-EFE/TANNEN MAURY

HIGHLAND PARK, Ill., July 6 (Reuters) - The man accused of spraying gunfire into a July Fourth parade from a Chicago-area rooftop, turning a holiday celebration into a killing field, was due to make his first court appearance on Wednesday to face seven first-degree murder charges.

Authorities said on Tuesday that the 21-year-old suspect, Robert E. Crimo III, planned the attack for weeks before climbing up to his sniper’s perch from an alley and firing more than 70 rounds randomly into parade spectators before making his getaway dressed as a woman.

Seven people were killed and more than three dozen were treated in hospital for gunshot wounds and other injuries after the carnage in Highland Park, Illinois, a Chicago suburb with a large Jewish community.

The suspect was arrested later on Monday when he was stopped by police at the wheel of his mother’s car, which authorities said he had driven to Wisconsin and back to Illinois following the shooting.

If convicted as charged on seven counts of first-degree murder, he would face a mandatory life prison sentence without the possibility of parole, Eric Reinhart, the state’s attorney for Lake County, said in announcing the charges on Tuesday.

“These are just the first of many charges that will be filed against Mr Crimo. I just want to emphasize that,” the prosecutor told reporters. “We anticipate dozens of more charges centered around each of the victims.”

Reinhart said he would ask a judge during a court hearing expected on Wednesday to order Crimo to remain in pretrial detention without bond. It was not immediately clear if Crimo had a lawyer.

Police said they had no immediate evidence of any anti-Semitic or racist basis for the attack. Investigators were reviewing videos Crimo had posted on social media containing violent imagery.

A high-powered AR-15-type of rifle used in the shooting was found at the scene, and the suspect had a similar weapon in his mother’s car when arrested, according to Sergeant Chris Covelli, a spokesman for the Lake County Sheriff’s office.

Covelli said the suspect had legally purchased five guns in all, a combination of rifles and pistols, despite having come to law enforcement’s attention on two prior occasions for alleged behavior suggesting he might harm himself or others.

The first instance was an April 2019 emergency-911 call reporting Crimo had attempted suicide, followed in September of that year by a police visit regarding alleged threats “to kill everyone” that he had directed at family members, Covelli said.

Police responding to the second incident seized a collection of 16 knives, a dagger and a sword amassed by Crimo in his home, though no arrest was made as authorities at the time lacked probable cause to take him into custody, Covelli said.

“There were no complaints that were signed by any of the victims,” Covelli said.

Still, authorities were at a loss to explain precisely how Crimo had evidently slipped past the safeguards of an Illinois “red flag” law designed to prevent people deemed to have violent tendencies from getting guns.

The Illinois State Police said in a separate statement that the knives were returned to the family later the day they were confiscated after the father told authorities they were his and stored in his son’s closet for safekeeping.

Nevertheless, state police acknowledged having received a report from local authorities declaring Crimo a “clear and present danger” after the alleged September 2019 threat to his family.

But state police said they closed the matter after determining that Crimo at that time had neither a gun-owner’s ID card to revoke or an application to deny. And neither of the 2019 incidents surfaced in the four background checks conducted during his subsequent firearms purchases, state police said.

Among those killed in Monday’s attack were Nicholas Toledo-Zaragoza, 78, a grandfather from Mexico celebrating with his family among the flag-waving crowds, and Irina McCarthy, 35, and her husband, Kevin McCarthy, 37, the parents of a 2-year-old found wandering alone after the attack.

The other dead included Jacki Sundheim, 63, a teacher at a nearby synagogue, Katherine Goldstein, 64, and Stephen Straus, 88. Police confirmed on Tuesday that a seventh victim had died.

The bloodshed in Illinois followed a recent string of deadly mass shootings that have renewed debate about gun safety in America, including an attack in which 19 school children and two teachers were killed in Uvalde, Texas, on May 24, just 10 days after 10 people were slain in a supermarket in a predominately Black neighborhood in Buffalo, New York.