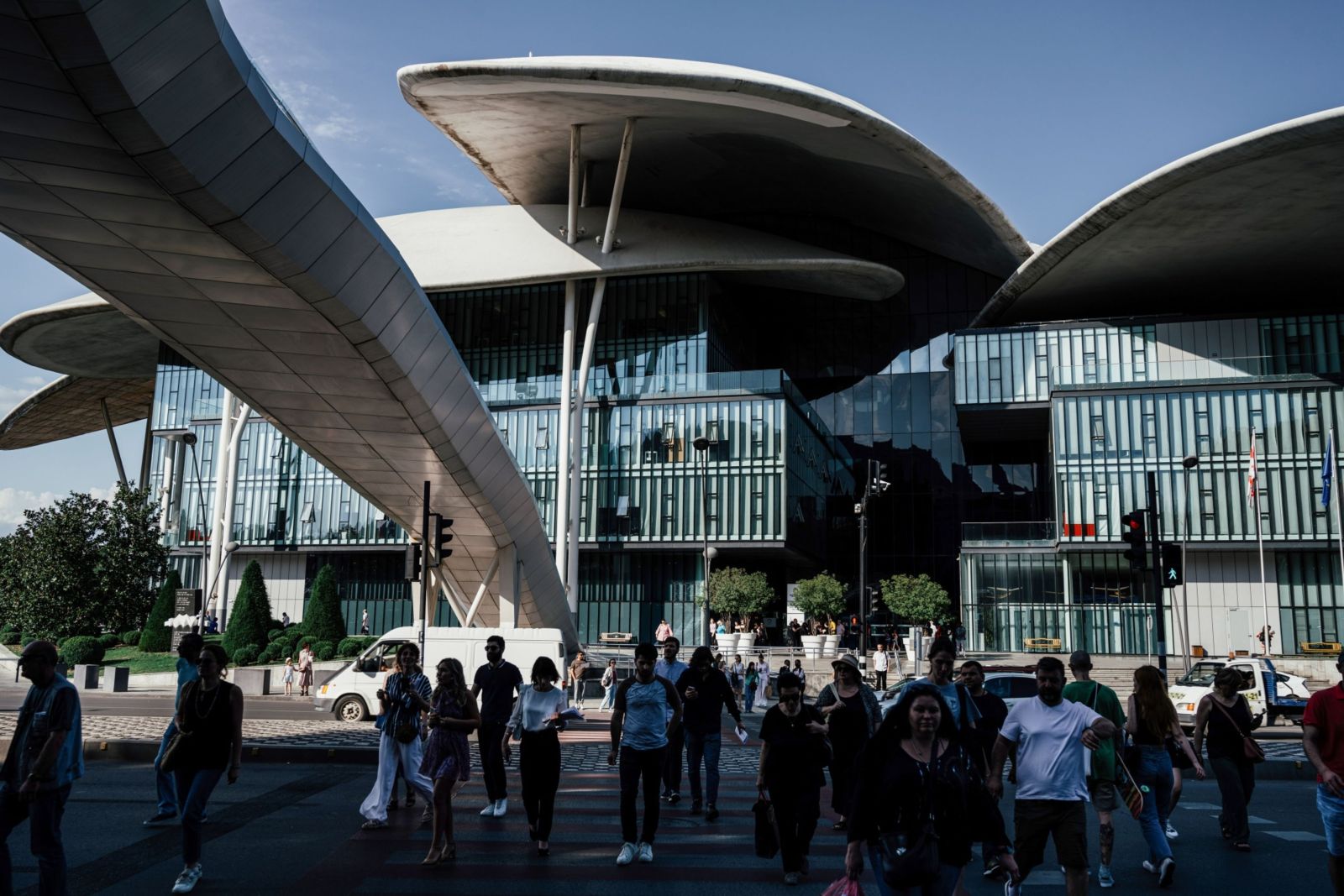 The Justice House registration centre, where Klimenko said it took him just 15 minutes to register as an entrepreneur. (Photo: Tako Robakidze/Bloomberg)

Georgia’s government estimates that 80,000 Russians, Belarusians and Ukrainians now reside in this small Caucasus nation of 4 million. Of those, 20,000-25,000 work in IT and software, and about 30,000 are Russian citizens who arrived since the war began. Many came recently from Belarus and Ukraine, too.

Dmitry Klimenko is putting the final touches to a new nightclub in Tbilisi’s central Vake Park, aimed at drawing some of the tens of thousands of disoriented fellow Russians, Belarusians and Ukrainians who fled to Georgia in recent months.

A veteran of seven nightclubs he opened in his home town of Novosibirsk over the years, Klimenko left Russia on March 7, as President Vladimir Putin’s invasion of Ukraine darkened the political climate at home.

“It’s what I know how to do,” said Klimenko, as first one and then a second pair of curious Russians stopped by to look at “The Balance”, his latest venture. “When I asked around people said: ‘Do it! We are lost here’.”

Georgia’s government estimates that 80,000 Russians, Belarusians and Ukrainians now reside in this small Caucasus nation of 4 million. Of those, 20,000-25,000 work in IT and software, and about 30,000 are Russian citizens who arrived since the war began. Many came recently from Belarus and Ukraine, too.

As IT specialists, they see little future in Russia as the security services tighten control of the internet, international sanctions squeeze the economy and foreign companies exit. They’ve flocked to other neighbouring states such as Armenia and Kazakhstan as well as to Turkey, Dubai and Israel, while the US is seeking to lure them by waiving some visa requirements. The exodus comes as Russian tech companies including internet giant Yandex NV struggle amid deepening censorship, shortages of key equipment, and a backlash in foreign markets.

Young, educated and financially self-sustaining, the arrivals are the kinds of people that tech hubs such as Berlin, Lisbon and London spend fortunes trying to lure. Keeping them in Georgia as they serve clients around the globe from their laptops represents a huge economic opportunity for a poor country with a liberal tax and business environment.

“The whole world is competing to attract these people,” said former central bank governor Giorgi Kadagidze, over coffee in downtown Tbilisi. He argues that Georgia should market itself aggressively as a safe haven from repressive regimes that offers a strong financial sector, beaches, mountains, a warm climate and good food. “We can be the Portugal of the East.”

And yet, Kadagidze doesn’t think that will happen, with most migrants leaving again once they can secure visas to travel onward. It doesn’t help that many ordinary Georgians, who suffered a Russian invasion of their own in 2008, are suspicious of the new arrivals.

In Kadagidze’s view, Georgia’s government lacks the will to create and publicise the environment that would entice them to stay, much as it was unable to secure the candidate status that the European Union has now awarded to Ukraine and Moldova. That failure with Brussels triggered some of the largest protest rallies Georgia has seen in its turbulent post-Soviet history.

The government came in for biting criticism from the European Parliament, which last month censured Georgia for repressing media freedoms and backsliding on judicial reform and civil liberties — including those of former President Mikheil Saakashvili, currently hospitalized while serving a jail sentence his supporters say is political.

The government’s opponents also accuse it of attempting to appease Moscow. Levan Davitashvili, minister for the economy and sustainable development, calls such criticisms unfair and politically motivated. Security services screen Russian immigrants thoroughly for agents or sanctions threats, he said, while the government has set up a task force to help companies and entrepreneurs settle and navigate procedures such as the checks needed to open a bank account.

The government is also in talks to attract several international tech firms moving staff from Russia, Davitashvili said at his office above the noisy hum of Tbilisi’s hyper-modern registration center. An astonished Klimenko, the nightclub owner, said it took him just 15 minutes to register as an entrepreneur.

“This is very important for Georgia, to Georgia’s economy and to Georgia’s digital transformation,” Davitashvili said of the Russian influx. Other advantages, including low income taxes, a special 5% corporate tax rate to attract foreign tech companies, and a culture and language familiar to Russians, were there long before the war, he said.

As for EU candidacy status, that was a severe disappointment to the government, too, given that Georgia leads Moldova and Ukraine on most EU membership criteria, according to Davitashvili.

Some hurdles to a Russian-driven tech boom in Georgia have little to do with government policy. For one thing, many Russians fled there because they could simply arrive without the need for a visa, but planned from the outset to move on as soon as they could secure the documents needed to do so.

Kostya Amelichev, 20, said he left Moscow on March 4 for fear of being drafted to fight and is now finishing his university degree remotely. A high frequency trading startup he brought to Tbilisi with fellow exiles — 10 of his university class are now in Tbilisi — pays the bills. But he expects to move on once he has his degree.

Web developer Vladislav Miedziyanski, 25, continued working for the Swedish company that employed him in Moscow, but says he can’t be sure if he’ll still be in Tbilisi in three years’ time. For now, he said, he’s just happy to be paying taxes to the Georgian government, rather than the “genocidal” regime in his home country.

Miedziyanski had found his way to Ploho (Bad), one of several Russian speaking bars popping up around Tbilisi. “You don’t even need a license to sell alcohol here,” said 24-year-old co-owner Dariya Zheniskhan, from Kazakhstan. Opened in October, the small bar’s walls and ceiling are covered in anti-Putin graffiti.

Some may yet opt to return to Russia. One senior executive at a major Russian tech firm said some workers were already coming back as they felt the initial fallout from the war was subsiding. And not everyone in Georgia is greeting the immigrants with open arms.

“It’s really a problem, because we don’t know what these people did in their country,” said Mikheil Ambukadze, a 30-year-old Georgian IT worker, as he waited for a free terminal at the registration center. Several others interviewed said the same.

Rents in the capital have soared – up 101% in May compared with a year earlier, according to research by Georgia’s TBC Bank – with Russians taking the blame, even if low base effects played a big role. Zurab Eristavi, managing partner of high end property company Rentals, said he received 500 Russian enquiries within a month of the war, but responded to just one – a returning Georgian.

It’s too early to know what long term impact the Russian immigration will have on Georgia, according to Koba Gvenetadze, Georgia’s current central bank governor.

There are indications of a short term boost. Remittances from Russia rose tenfold in May; deposits to bank accounts held by Russian citizens were up by $25 million between the end of February and the end of May; and deposits to all bank accounts as a whole in the country rose $192 million – likely the result of money spent by arriving migrants – according to Gvenetadze.

The net effect has been to strengthen Georgia’s currency and current account balance. But if returning ethnic Georgians will likely stay for the long term, “the rest of the immigrants will probably leave at some stage,” the central banker said. “The question is when, and we don’t know.” BM