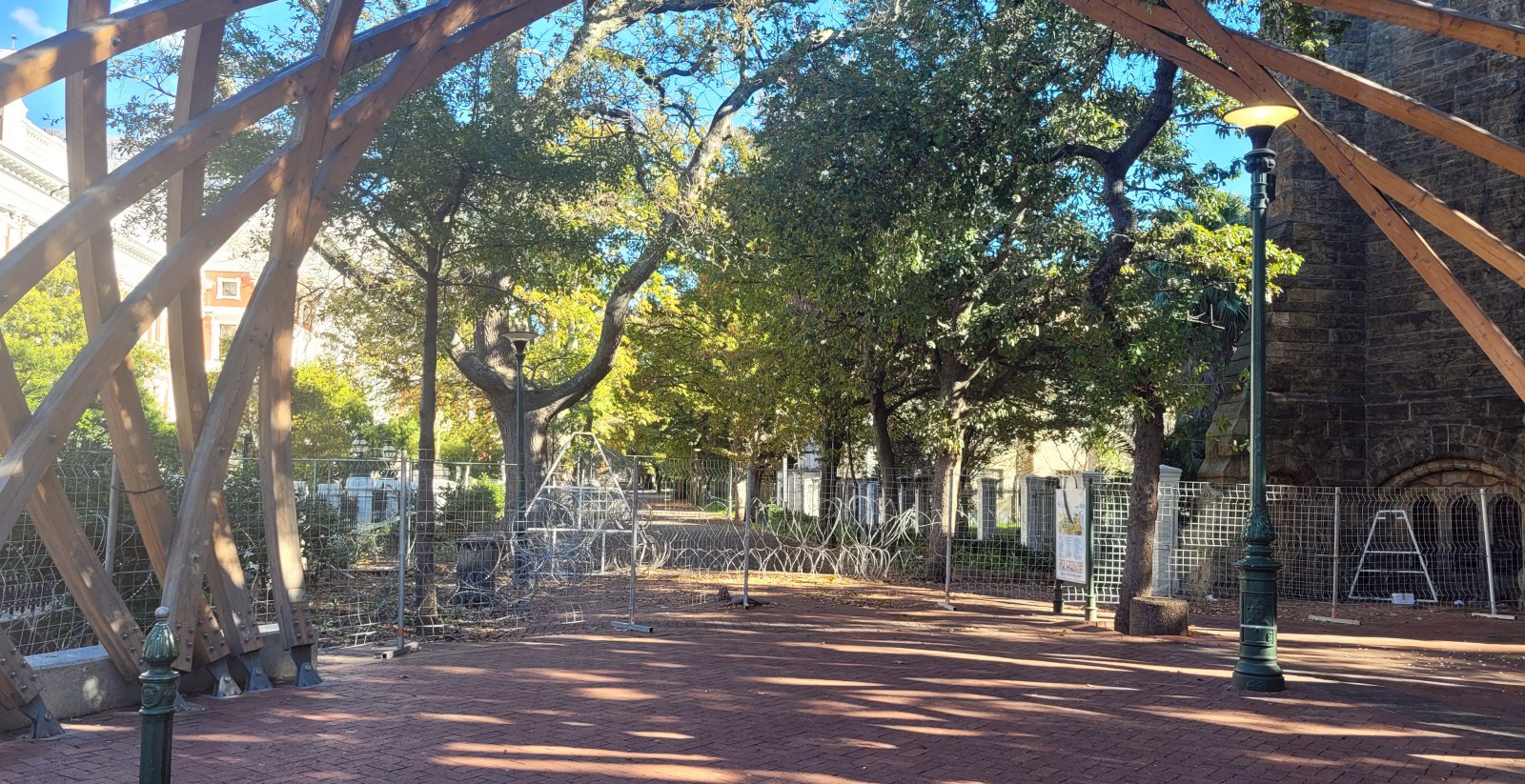 Barbed wire and fencing block a main entrance to the Company's Garden in Cape Town that runs alongside Parliament. It appears the measures are related to security at Parliament, portions of which were gutted in a fire earlier this year. (Photo: Caryn Dolley)

Coils of barbed wire and fencing are blocking off an entrance, alongside Parliament, to Cape Town’s historic Company’s Garden. This visually abrasive measure is apparently meant to improve security in the parliamentary precinct gutted in a fire at the start of the year.

A visitor planning to stroll through the Company’s Garden in Cape Town may now first have to find an entrance to the city’s green lung that is not blocked with several coils of barbed wire and fencing.

Instead of an inviting, broad, tree-lined pathway, this alarming sight marks a main entrance to the garden that, on the one side, runs alongside Parliament and on the other side is connected to an area where St George’s Cathedral, southern Africa’s oldest cathedral, is situated.

The Company’s Garden is fringed by several other landmarks and consists of usually publicly accessible tree-lined paths and lawns that cut through the central business district.

Both locals and tourists use it.

The City of Cape Town’s website details some of the Company’s Garden history: “It takes its name from the Dutch East India Company, who first started the garden in 1652 to provide their ships with food…

“The public section of the garden has been enjoyed by visitors for the sheer beauty of its flora and the allure of its historic setting since it was proclaimed for public use in 1848.”

However, the coils of barbed wire and fencing now block the garden’s main entrance that leads to Government Avenue – described in a city document as “Cape Town’s earliest main thoroughfare”.

This entrance is a suggested starting point for walking tours through the garden and is also marked by the Arch for Arch structure, built to commemorate the life of Archbishop Emeritus Desmond Tutu.

This structure – a dome made from wooden beams – now ironically frames the barbed barricade instead of an open walkway into the Company’s Garden.

There are also coils of barbed wire further along this walkway, inaccessible because of the erected fences that run parallel to Parliament.

Daily Maverick understands the measures are ostensibly to prevent people from getting into the parliamentary precinct, sections of which were gutted in a fire at the start of 2022, via the Company’s Garden.

A trespasser allegedly started the blaze.

This raised critical questions about security measures, or lack thereof, at Parliament – including what its own parliamentary protection service was doing.

Parliament is in recess until August.

In terms of the barbed wire and fencing blocking a Company’s Garden entrance, the City of Cape Town referred Daily Maverick questions this week to Parliament and the South African Police Service (SAPS).

Parliament spokesperson Moloto Mothapo told Daily Maverick on Tuesday that Parliament was not responsible for guarding the external area around it and that this was up to the SAPS.

Western Cape police referred a Daily Maverick query on the issue to the national police.

She therefore did not provide details on when the barbed wire and fencing was set up to block the Company’s Garden entrance, and how long they would remain there.

Daily Maverick understands, though, that while some of the fencing was erected several months ago, the coils of barbed wire were added on or around 26 June.

Individuals wanting to enter the Company’s Garden that day appeared confused before walking elsewhere instead, some after having a quick chat to police officers who were present.

There did not appear to be a sign explaining why the wire and fencing was there, or directing visitors to other access points into the garden.

Other entrances were not blocked.

But once in the garden, the area closer to Parliament was cordoned off, meaning the area around the blocked entrance could not be accessed from the other side.

Arson and a suicide

On 2 January 2022, the fire ripped through Parliament.

A suspect, Zandile Mafe, was arrested in connection with the blaze.

Daily Maverick previously reported that he faces charges of housebreaking with intent to commit terrorism and arson, arson, terrorism and theft.

The SAPS previously told Parliament that as part of the case against him, there were “more than 30 hours of video footage, which will speak for itself”.

There are concerns about who should control security relating to Parliament.

In September 2018, parliamentary manager Lennox Garane committed suicide in his office – this tragedy also equated to a security breach since the firearm he used had not been flagged by security.

That same month, in a presentation to Parliament on the police’s role in protecting it and in reaction to Garane’s suicide, the SAPS said: “The primary aim of access control is to safeguard Parliament as a strategic government installation and to ensure the safety and protection of VIPs within the parliamentary precinct.”

It highlighted several security concerns, including: “The perimeter fence at Parliament is only 1.2m high and easy to jump over.”

But Daily Maverick’s Marianne Merten, reporting on the September 2018 parliamentary meeting involving the SAPS, described how their push to “safeguard Parliament as a strategic government installation” alarmed some MPs who warned against “militarising” the People’s Assembly.

In April 2022, Merten also reported that as far back as Garane’s suicide in 2018, “SAPS generals moved to restyle Parliament, or the People’s Assembly, into a government installation”.

Merten wrote that, following the fire at the start of 2022, the police started focusing on Government Avenue, blocking it “with iron fences marked with yellow police crime scene tape”.

“The Government Avenue public space,” she said, “has long been a bugbear of the securocrats.”

Merten further stated: “More than 90 cameras have been in place for years now across the parliamentary precinct. But heritage restrictions denied the SAPS its push for a higher fence or wall to replace the 1.2m-high trellis alongside the back of Parliament abutting Government Avenue and the Company’s Garden…

“The fire at the National Assembly handed the securocrats the means to get their way… in late March, further security changes buzzed on the parliamentary grapevine – all of Parliament had been declared a National Key Point.”

Half a kilometre of fencing

In May 2022, during a meeting in Parliament about the January fire, an SAPS presentation said three main national Department of Public Works and Infrastructure projects were under way.

These included a maintenance contract for security systems including CCTV and access control, an “enhanced perimeter barrier and five upgraded entrances”, as well as a new main security control room.

Daily Maverick has established that more fencing might be on the cards for Government Avenue.

A tender, linked to the Department of Public Works and Infrastructure, was being advertised in July 2022 for “alterations to the existing architectural historical perimeter fencing at Parliament along Government Avenue in Cape Town”.

The invitation to tender said the project would involve: “The supply, modification of the existing fencing/columns and the installation of approximately 500m of the perimeter fence line at the Parliament Precinct.”

Recommended bidders would have to obtain state security clearance.

Meanwhile, in Parliament during the meeting in May about the fire, the South African Heritage Resources Agency presented a report that said the structural damage from the blaze was extensive.

The entire roof of the Old Assembly was destroyed and wooden beams supporting the New Assembly’s structure were affected.

“Despite interrupting the day-to-day business of Parliament, it must be stated that heritage resources are finite and therefore the material loss of the destroyed historical fabric cannot ever be replaced, despite restoration efforts…

“The rarity value of Parliament and the Parliamentary Precinct is ensconced in the fact of it being an uncommon structure, part of a special landscape, the Company’s Garden, and what could conceivably be seen as a cultural precinct.” DM