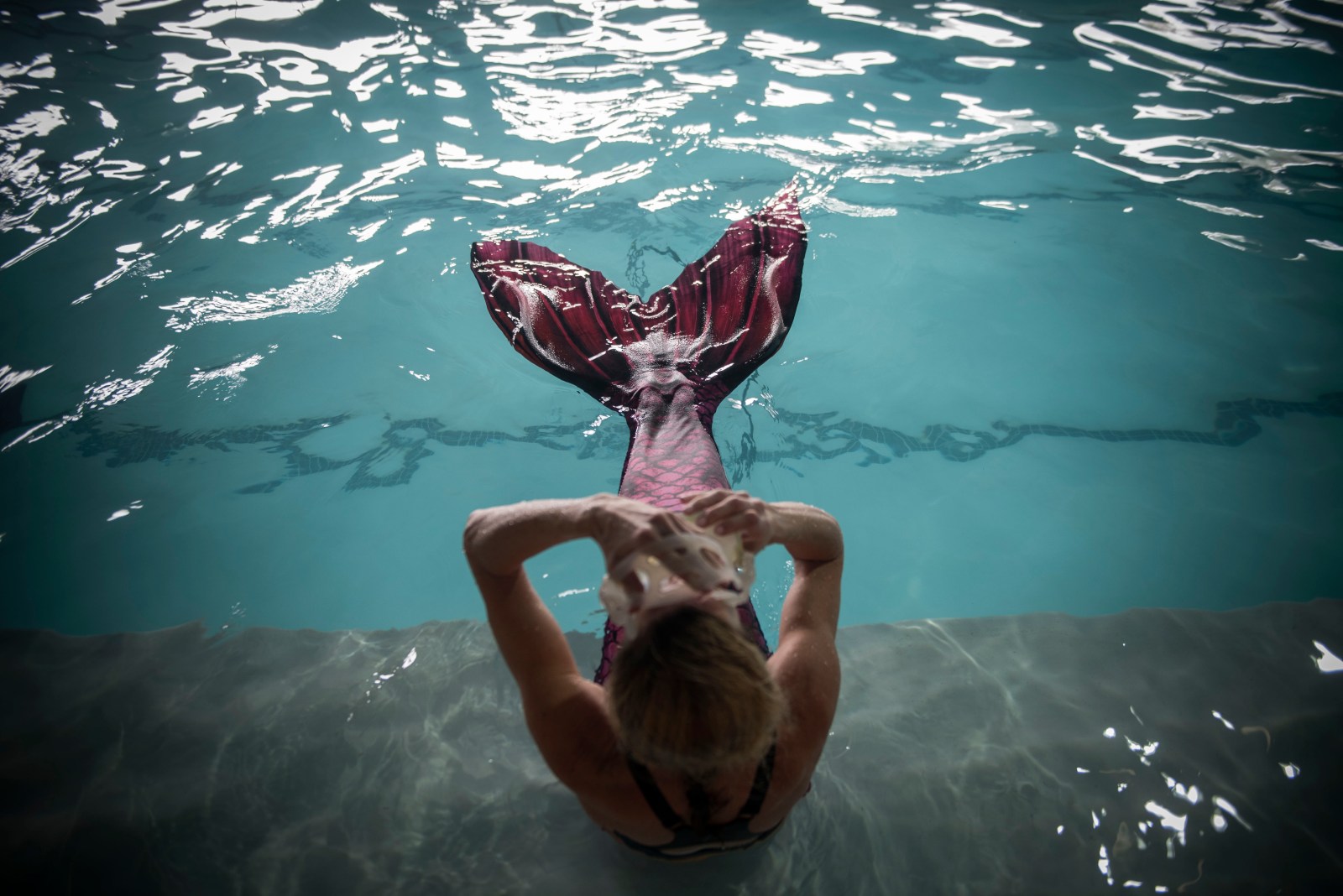 Participants wearing a fabric (scuba knit) mermaid tail during a mermaid class at Merschool in Kyalami, South Africa, 4 April 2022. Mermaiding is the practice of wearing a mermaid tail and swimming in it. It includes aspects of artistic swimming, freediving techniques and cosplay. It is done for sport, fun, self-expression and exercise. Image: Gallo Images / Alet Pretorius

Mermaid swimming is gaining popularity in South Africa as more people are dipping their toes into this fantastical activity.

Mermaids have been known in legend and folklore across various cultures for centuries. The ancient Syrian deity Atargatis is one of the earliest likenesses to mermaids known; human above the waist with a fish tail below, and believed to be the goddess of fertility. Mermaids continued to appear in myth through the ages, but perhaps the most popular mercreature, aka a creature of the sea, is Hans Christian Andersen’s The Little Mermaid from his 1837 fairytale. Disney’s 1989 film of the same name further entrenched the mythical creature in popular culture, creating a fantasy in the minds of generations.

What if mermaids existed? Better yet, what would it be like to be a mermaid? As it turns out, the fairy tale might just be in reach as mermaid swimming makes a splash in the world of aquatics, and South Africans are now diving head first into the trend.

The sport involves swimming with a custom mermaid tail using a dolphin-like technique as the feet kick in the tail and the hands make sculling movements. A full-body wave-like movement called a “dolphin kick” is the main way to propel the swimmer.

“Mermaiding is generally recommended for experienced swimmers, as swimming with feet kept together is more difficult and can be tricky if you’re not used to it. We use the dolphin kick as our main stroke in the water, using your hips and legs to propel you forward. This is aided by a monofin, which is a single fin that keeps your feet together when you swim,” explains Dana Cato, a mermaid and owner of Two Oceans Mermaid Tails.

What equipment do you need?

Real-life “mermaids” wear a tail and a monofin often made from scuba knit or spandex, which are usually colourful and designed to look just like an exaggerated fish tail.

“My tails are made of fabric which has the design printed directly into it. I use a thick swimsuit fabric called scuba knit, which is softer and thicker than standard swimsuit spandex and has a more luxurious feel to it. I try to offer tails for a variety of swimmers with different styles of tails to ensure there is something for everyone,” Cato says.

Cato started her business selling mermaid tails in 2020 and has a variety of styles, sizes and designs for sale.

“I started making tails when our exchange rate to the US dollar became quite high and buying them from overseas started to get too expensive. Our local postal system also wasn’t the most reliable, and it became too risky to import from overseas. I started making prototypes in 2017 and officially opened for business in 2020, starting off with a small range of tails for kids and adults,” she explains.

“All my tails are designed by myself, from the scales to the colours right down to the shape.”

Cato’s business is inspired by her own love for mermaids and swimming, having spent her childhood by the water. “Growing up with Disney movies, I was somewhat obsessed with The Little Mermaid. From a young age, I found water to be my happy place – just being able to escape, and really dive into my childlike imagination of swimming like a mermaid.

“Somewhere around 2015, I discovered monofins and tails from overseas, and realised that being a mermaid was a reality, no longer a dream. As an adult, we all want something fun and relaxing to do – and mermaiding was my ultimate childlike-fantasy escape from adulting, which I think in the times we live in, is something we all need in some form,” she says.

“The appeal of mermaiding is the opportunity to escape the stress of life, and to enjoy the relaxing environment of being underwater. For those who find water to be such a calming space, being able to be a mermaid is a fun escape from reality, even if it’s just for a short space of time. Some like going to the spa, some like going for a hike – for us mermaids, it’s donning our fins and tails and going for a swim.”

In August 2020, and five months into the national lockdown, South Africa’s first mermaiding school opened, offering people the chance to dip their toes into the world of mermaiding.

Mermaiding as a workout

“It was a scary time,” Merschool’s founder, Izelle Nair, tells Maverick Life. “I wanted to bring something magical that will uplift the community.”

Nair’s classes are open to everyone and anyone, and although classes for kids are more popular at Merschool, she says adult classes are growing and more men are joining in, too.

“From my experience of orders placed, I have found there’s an equal amount of interest between adults and children buying mermaid tails,” echoes Cato.

“I see adults buying for fun or to get into the hobby, and some also purchase for photoshoots and others for events as they are performers as mermaids. Children’s tails are also popular at the beginning of summer and leading up to Christmas.”

Seen as a form of sport, mermaiding is also becoming a competitive activity, and Merschool hopes to send athletes to compete in the World Championship in China next year,  where more than 70 worldwide competitors showcase their mermaid swimming skills.

“In 2015, when I got my first monofin, I knew of no one else near me who was interested in mermaiding. Most people thought I was a tad crazy to swim with a monofin, to want to make tails or swim in a tail. A lot of people laughed, and thought it was weird that a twenty-something woman wanted to swim in a tail. I was lucky enough to have friends who wanted to do mermaiding with me, and the concept of mermaiding slowly became something that other people wanted to do as well,” she explains.

“People are accepting it more, and get quite excited when they hear about it. More and more mermaids have appeared around the country, who have since helped many people become aware of the reality of mermaiding.

“Mermaiding is truly amazing when you find the right group of like-minded people who enjoy indulging in youthful wonders to escape from the madness of life.” DM/ML