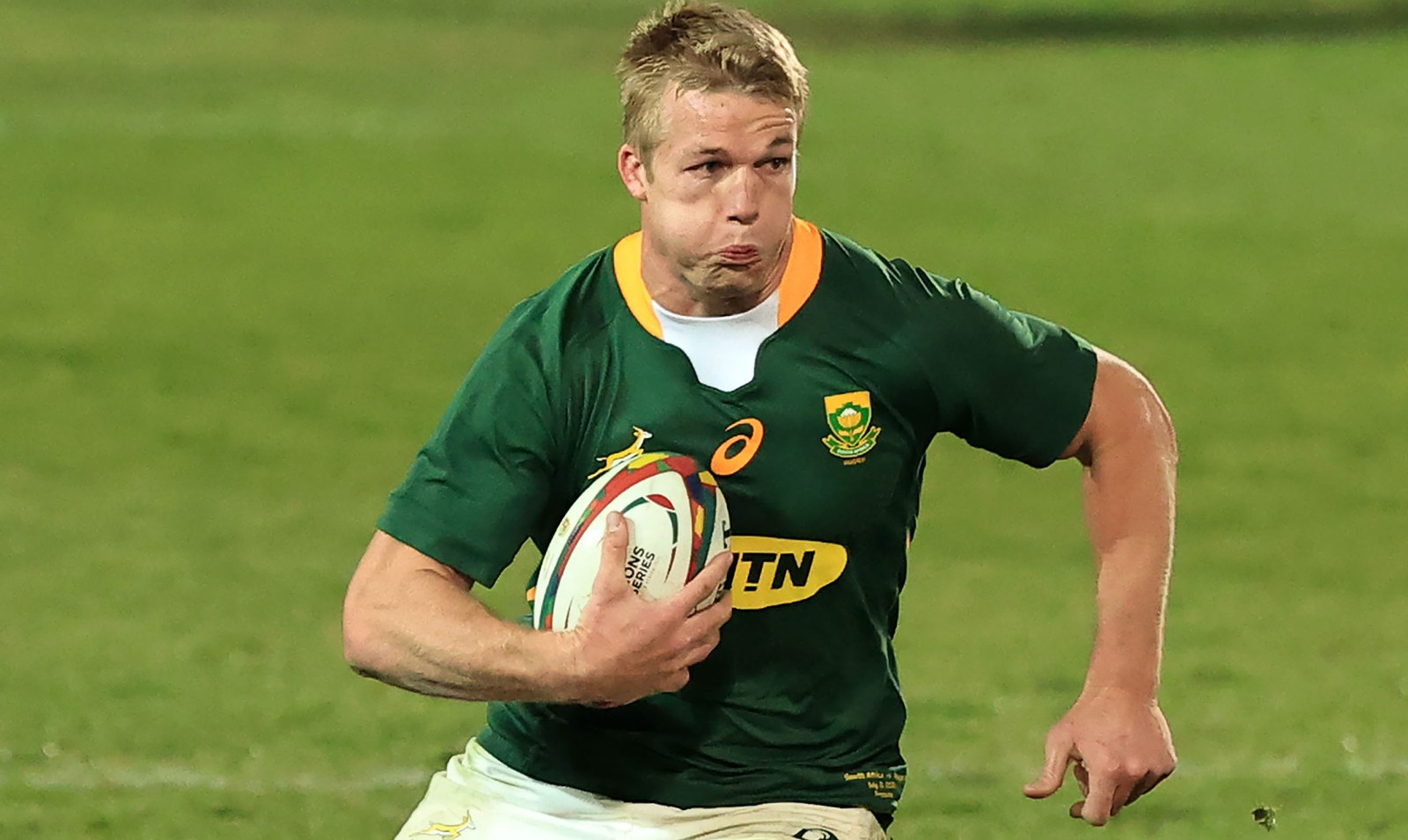 Boks make 19 changes from the first Test for the second meeting with Wales.

Flank Pieter-Steph du Toit will make his first appearance for the Springboks in a year when he starts the second Test against Wales in Bloemfontein on Saturday.

Flyhalf Handre Pollard also returns after sitting out the first Test, which the Boks won 32-29 in Pretoria while coach Jacques Nienaber also included six uncapped players in the 23-man squad.

Pollard captains the Boks for the first time with Siya Kolisi rested, making him the 64th man to lead the Boks in a Test. Pollard has been the official team vice-captain under Kolisi.

It’s certainly an experimental team, and some might even say a slightly arrogant selection considering the series is still in the balance. But coach Jacques Nienaber has stressed the need to build more depth and experience over the course of the year.

“We said from the outset that we needed to strike a balance between giving our talented young players an opportunity to show what they can do at international level, and winning,” said Nienaber about the selections.

“If one looks at the balance between players who have played at this level and those who have performed consistently well for their franchises and clubs, I think we have a nice balance in this squad.

“A number of these players have been with us for a few seasons, while others travelled with us last season to Australia for the Rugby Championship and the year-end tour, and then there are a few new faces who showed during the season that they have the potential to rise to this level of the game, so we are excited to see what they can do on Saturday.

“Wales showed last week that they are fighters and can go for the full 80 minutes and we are expecting nothing different from them this week.

“This will certainly be a good test for the younger players in the group to measure themselves against some of the best players in Wales, some of whom played for the British & Irish Lions, so everyone knows they will be in for a proper Test on Saturday.”

Not a knee-jerk reaction

Nienaber is not a knee-jerk-type coach and while many looking at the team could see it as a response to a dire first-half performance, the reality is that Nienaber was always going to use this series to experiment.

The only surprise is that he’s using the second Test for it and not what many hoped would be a dead rubber third Test in Cape Town.

Only four players in the match-23 retained their places in the squad from last week’s victory. Experienced lock Eben Etzebeth, who earns his 99th cap, starts while hooker Malcolm Marx, prop Vincent Koch and utility back Damian Willemse have been included on the bench.

It’s a welcome return for Du Toit, who injured his shoulder in the second Test of the 2021 series against British & Irish Lions missing the remainder of the season and the beginning of the 2022 campaign.

Nienaber again opted for a split of six forwards and two backs on the bench, with Willemse’s versatility seeing him able to cover flyhalf, centre and fullback, while Williams, who has been waiting in the wings at scrumhalf, provides cover for his provincial team-mate Jaden Hendrikse.

“We are delighted to see these players get an opportunity at this level and I believe if they play to their potential, they will bolster our depth going forward,” said Nienaber.

“They are all very excited at the prospect of wearing the green and gold, but they also know what Wales will bring on the day and that every opportunity will be important.”

On Pollard handing the captaincy, the Bok coach said: “Handre is one of our most experienced players and has been part of our core leadership group for a number of years now, I’m sure he will slot into the role with ease.

“Wales will certainly gain confidence from their performance last week, and I have no doubt they will feel aggrieved by the fact that they lost out so narrowly, so we know we have to produce a top-class performance to win this weekend.

“The set pieces are going to be a key area once again, and we have identified the areas that we need to improve on and have already started working on those facets of the game.

“They are a team that keep going until the final whistle, so we expect them to push us to the limit, but we know what our standards are a team, and every player knows what is expected of him.

“It is definitely going to take a full 80-minute effort to win the match, and if we do well, hopefully, the results will take of itself.”

The total Test caps for the Springbok starting line-up is 393.

There are 132 caps in the backline with 261 caps amongst the forwards. On the bench there are a further 99 caps.

The average caps per player in the backline are 14, the forwards 32, while the players on the bench average 12.