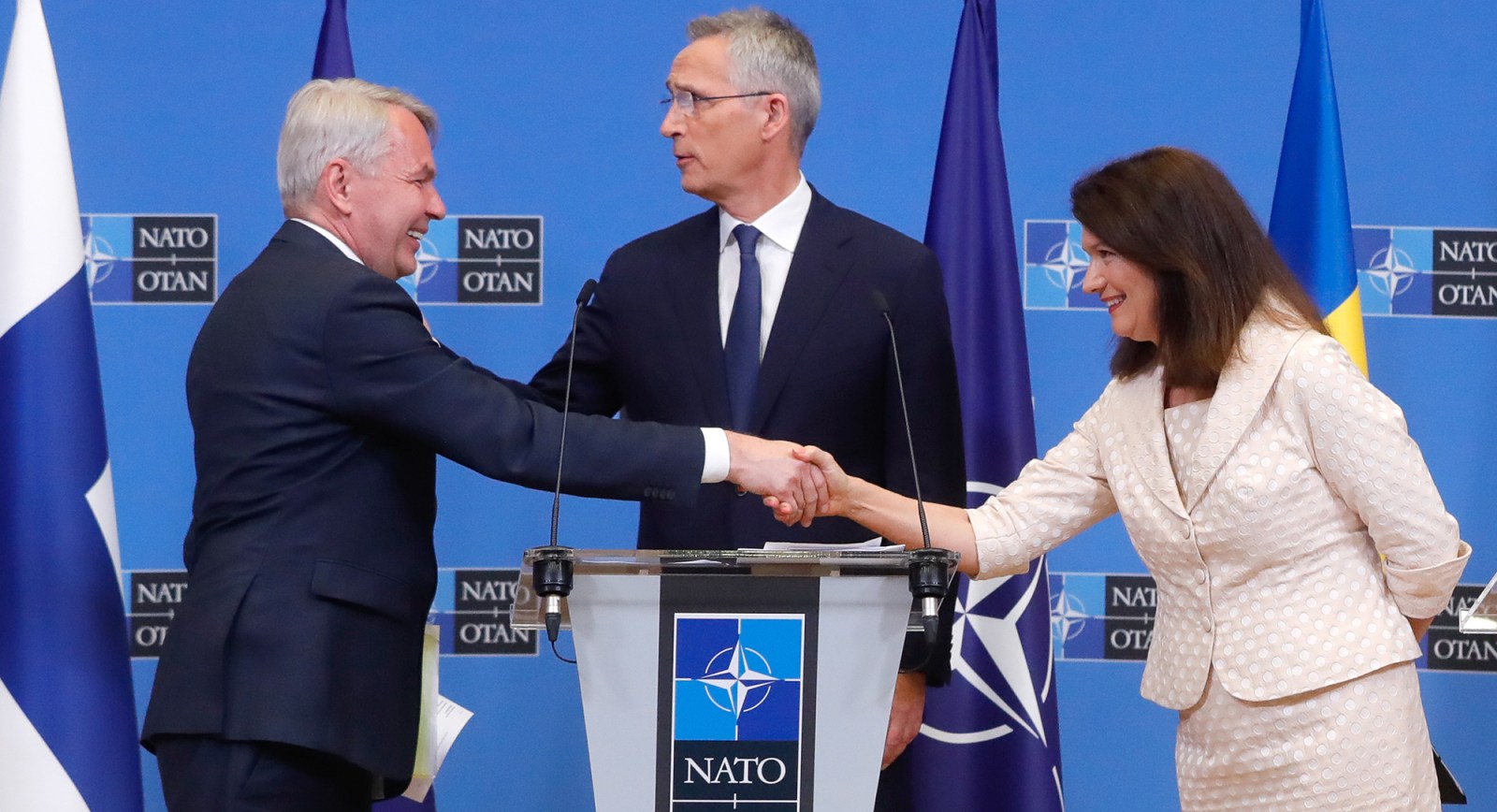 Nato formally signed off on plans to bring Sweden and Finland into the defence alliance, moving a step closer to bolstering its eastern front against Russia following the invasion of Ukraine.

Turkey joined its allies in signing the accession protocols while renewing its threat to block the expansion if the two Nordic nations don’t extradite people it considers terrorists. The expansion must be ratified by the parliaments of each of the 30 member nations, a process that can take many months.

“This is a historic day,” said Nato chief Jens Stoltenberg. “Russia has shattered peace in Europe, so it’s important we stand together at this important time.”

With Lysychansk under its control, Russia is switching its focus further west into Donetsk, intensifying shelling of the region, according to Ukrainian officials. Fighting continues on the Bakhmut axis, which has emerged as a new flashpoint. Ukrainian forces repelled a Russian assault close to Slovyansk, the Ukrainian General Staff said, with the city’s mayor urging residents to evacuate as the frontline moves closer. Russia fired seven missiles further west toward Dnipropetrovsk overnight, six of which were shot down by Ukrainian forces, Valentyn Reznichenko, the head of the regional government, said on his Telegram account.

Kaliningrad governor hopes EU is about to ease restrictions

The governor of Kaliningrad said he’s hopeful the European Union may ease limitations this week on the transit of goods to Russia’s Baltic exclave.

Russia has warned that it will retaliate against EU member state Lithuania for blocking rail transport of goods such as steel in accordance with the bloc’s sanctions measures.

Rouble falls as investors rush to safety of US dollar

The Russian currency plummeted the most in four months, pulling back from a rally that confounded traders and politicians alike since the early days of President Vladimir Putin’s war on Ukraine.

The currency dropped as much as 11% to 62.30 per dollar amid broad strength in the greenback that also saw the euro plunge to a two-decade low. The decline follows Russia’s relaxation of capital controls and its cancelling of a rule forcing the conversion of export revenues to roubles.

A key pipeline delivering Russia’s natural gas to Europe may not return to full capacity after planned maintenance this month, Goldman Sachs Group  said, echoing the concerns of German officials.

Nord Stream 1 is set to shut for work on July 11-21, tightening a market that’s seen prices soar in recent weeks. With Moscow having already slashed flows through the pipe to 40% of capacity, any move to withhold supplies for longer would severely hurt Europe’s efforts to refill stockpiles for winter.

“While we initially assumed a full restoration of NS1 flows following its upcoming maintenance event, we no longer see this as the most probable scenario,” Goldman analysts said in a note.

The ministry is planning to seek financial aid from the European Commission to build additional grain silos, as the existing storage capacity at all terminals in Varna is 150,000 tonnes.

Turkey is threatening to veto Nato membership for Sweden and Finland, even as the military alliance formally paved the way for the two Nordic countries to join.

Turkey won’t ratify membership in the North Atlantic Treaty Organization for the applicants if they don’t fulfil their promises to combat terrorism and extradite suspects under a memorandum of understanding reached at an alliance summit in Madrid last week, Foreign Minister Mevlut Cavusoglu said on Monday.

“They have to comply with this document. If they don’t then we won’t allow them to join Nato,” Cavusoglu told NTV television.

UniCredit mulls over a Russia exit that it can reverse

UniCredit is considering selling its Russian unit through a structure that would let the bank repurchase the subsidiary if the geopolitical situation stabilises, according to people familiar with the matter.

Italy’s second-largest lender is looking at several possible deal arrangements, including one that would give it the option of buying back the unit depending on market and political conditions, said the people, who asked not to be identified because the matter isn’t public.

UniCredit already took €1.85-billion of charges on its Russia unit and Chief Executive Officer Andrea Orcel is seeking a deal that would limit any further pain whatever the outcome of the war in Ukraine

The UN’s food and agriculture arm is working to improve Ukraine’s grain storage capacity and aid supply chains, from harvesting to exports, with a new $17-million project.

The project is funded by Japan and implemented along with Ukraine’s Agriculture Ministry, the Food and Agriculture Organization said in a statement.

Ukraine is expected to harvest as much as 60 million tonnes of grain this year, but the available storage is already about 30% full with last year’s grain, which it wasn’t able to export due to the conflict. The FAO will provide polyethylene grain sleeves, other modular storage and grain loading and unloading machinery.

Romania has already facilitated the export of more than one million tonnes of grain from Ukraine since the Russian invasion in February. The new route “ensures a significant increase of the Ukrainian freight flows, eliminating from the supply chain the berths and storage spaces in the Constanta port,” TTS said in an e-mailed statement. The port, on the Black Sea, has been overwhelmed by a jump in traffic.

Ukraine’s ambassador to Germany, Andriy Melnyk, is poised to return to Kyiv after eight years in Berlin, according to Bild Zeitung, which cited unidentified sources in the Ukrainian capital. Melnyk has been strident in his criticism of Germany and accused Chancellor Olaf Scholz of taking too long to send heavy weaponry to Ukraine.

At least 13,000 of Musk’s Starlink internet devices in Ukraine

Elon Musk’s satellite internet service Starlink has been vital in keeping parts of Ukraine affected by the Russian invasion connected, the country’s minister for digital transformation, Mykhailo Fedorov, said in an interview with Bloomberg TV.

More than 13,000 Starlink devices are operating in Ukraine, including on the front line, and government officials are in daily contact with Musk’s representatives, Fedorov said.

Russian imports picked up a bit in May, even from some countries that have joined the US and its allies in imposing sanctions over the Kremlin’s invasion of Ukraine, as the economy showed signs of stabilising.

Trade flows into Russia remain far below pre-invasion levels, but imports for the five major trading partners were down 29% in May on the year, compared with a 43% drop in April. Bloomberg calculated the figures based on reports from those countries, which account for about half of Russian imports. Russia stopped releasing detailed trade data after the invasion.

Turkey, which hasn’t joined the sanctions, saw exports to Russia jump to the highest since December.

Potanin has headed Nornickel since striking a 2012 shareholder accord with aluminium producer Rusal, the company’s second-largest investor. A merger would create a “national champion”, the tycoon said in an interview with Russia’s RBC TV channel on Tuesday. Rusal shares jumped as much as 12% in Hong Kong.

Among the buyers he named are Iraq and Saudi Arabia, both US allies. One of the largest contracts of 150,000 tonnes of grain is with Iran.

The EU Parliament vote is set to take place on Wednesday, and was supposed to mark the easy passage of a New Year’s proposal by the European Commission to include gas and nuclear energy in the bloc’s so-called green taxonomy. But Putin’s invasion — and the energy crisis it fanned — has upended that process.

Just last week, Ukraine’s ambassador to Germany called on legislators to reject the commission’s proposal, warning that it would benefit Russia and perpetuate European reliance on its gas supplies.