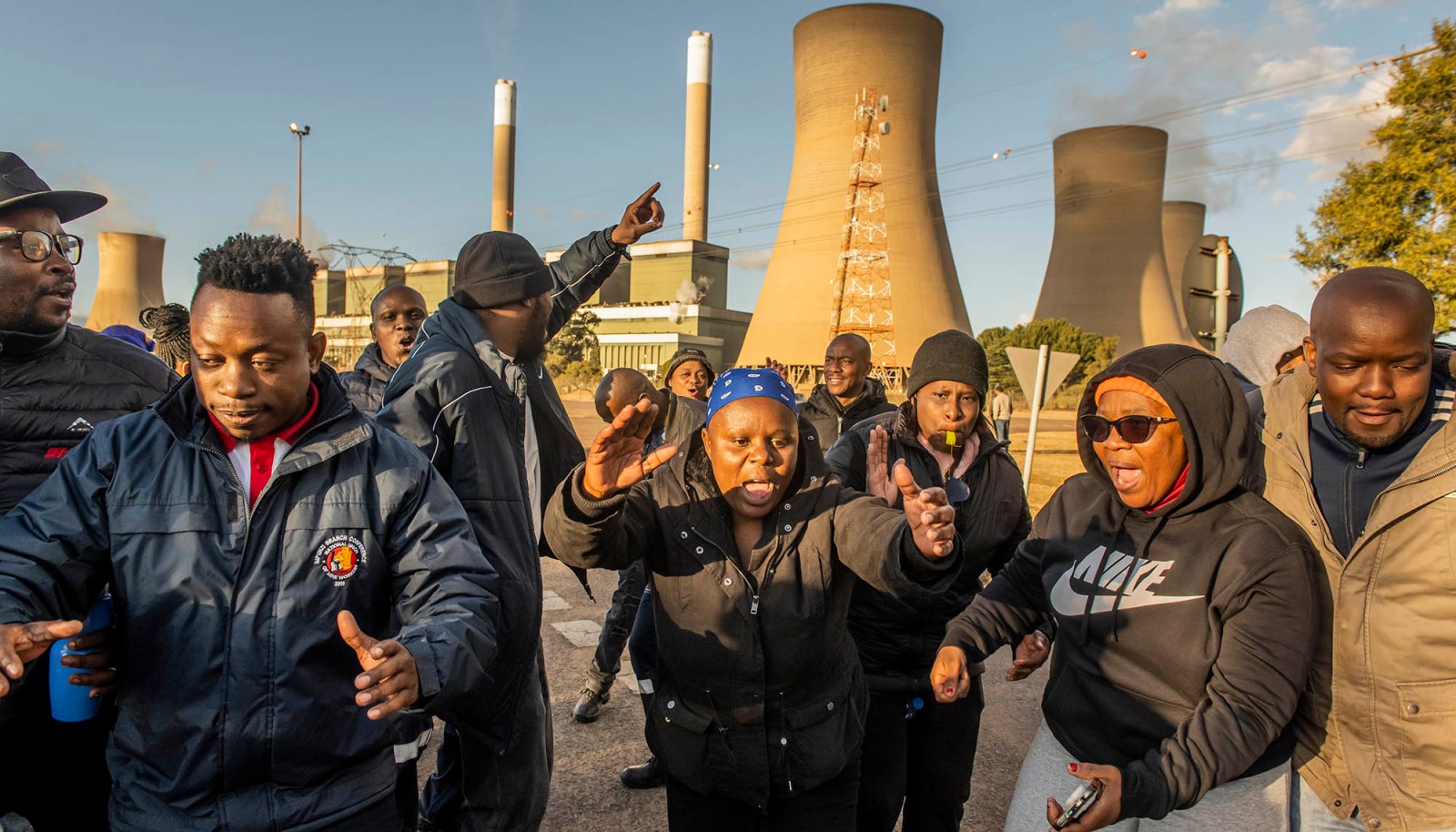 Members of the National Union of Mineworkers of South Africa protest at the entrance of Duvha Power Station on 28 June 2022 in Witbank, South Africa. (Photo: Gallo Images / Rapport / Deon Raath)

Eskom signed a one-year wage agreement for 7% pay hike on Tuesday with three unions, bringing an end to the threat of further strike action widely blamed for tipping the grid into Stage 6 load shedding. But the utility warned that its maintenance backlog as a result will take time to clear.

“A 7% salary across-the-board increase for all the employees covered in the CBF will be applied for the year starting 01 July 2022 to 30 June 2023. For this period, the housing allowance will increase by R400 per month.

“With effect from July 2022, Eskom has agreed to reinstate the conditions of service which applied during the agreement in force until 30 June 2021,” Eskom said in a statement.

So ends a drama that saw Stage 6 load shedding imposed for the first time since 2019, delivering a fresh shock to a struggling economy beset by quickening inflation, rising interest rates, sky-high unemployment, and collapsing business and consumer confidence.

The NUM and Numsa, whose members were behind the unprotected strike, maintained the strike was not the cause of the intensified load shedding, but few are buying that line. Of course, load shedding is rooted in decades of ANC-driven mismanagement and corruption, but given the fragile state of the grid, any strike is bound to make it worse.

The unions have also maintained that their members can hardly be blamed for the shambolic state of Eskom and, fair enough, Eskom electricians, welders and mid-level supervisors did not quench their thirst at the Saxonwold Shebeen.

But the sad economic reality is that Eskom, with its mountain of debt, is hardly liquid and will be hard-pressed to absorb the additional costs.

“The overall effect of this agreement on the wage bill will be more than R1-billion over the period of the agreement. This of course will be a struggle for Eskom to afford,” the utility said in a statement.

“It is important to note that while the workforce is returning to work, the system will still take some time to recover. As a result of the strike, maintenance work has had to be postponed, and this backlog will take time to clear.”

The unions have confirmed the agreement and asked their members to return to work immediately. It seems almost all of them already had, anyway.

Consumer inflation is currently running at 6.5% and seen hitting 7% or higher, so Eskom workers are just keeping up with the rising cost of living this year after falling behind the past couple of years. That was clearly one factor driving rank-and-file militancy.

For Solidarity members, who did not take part in the unprotected stoppages and protests, it probably seems like Christmas came early. The union’s highest demand was a 6.5% hike and it got that with a cherry on top. The NUM and Numsa, by contrast, were pushing for double-digit wage increases.

The next pressing question is how quickly the maintenance backlog can be addressed. Load shedding was on the cards all winter, if not for all of 2022 regardless, and will only be more intensive as a result. Does that also herald more overtime costs?

And looming over this tense landscape is the fact that the agreement is only for one year. Eskom is an essential service so its employees cannot lawfully down tools, but many did in recent days.

There is a lot of bad blood between the unions and Eskom management as the SOE attempts to restructure an entity that has almost been run into the ground.

Will employees down tools again next winter and, if they do, what state will the economy be in then? DM/BM