Migrants and the world of work in SA: exposing the ‘j...

Migrants and the world of work in SA: exposing the ‘job stealing’ lies of the xenophobes 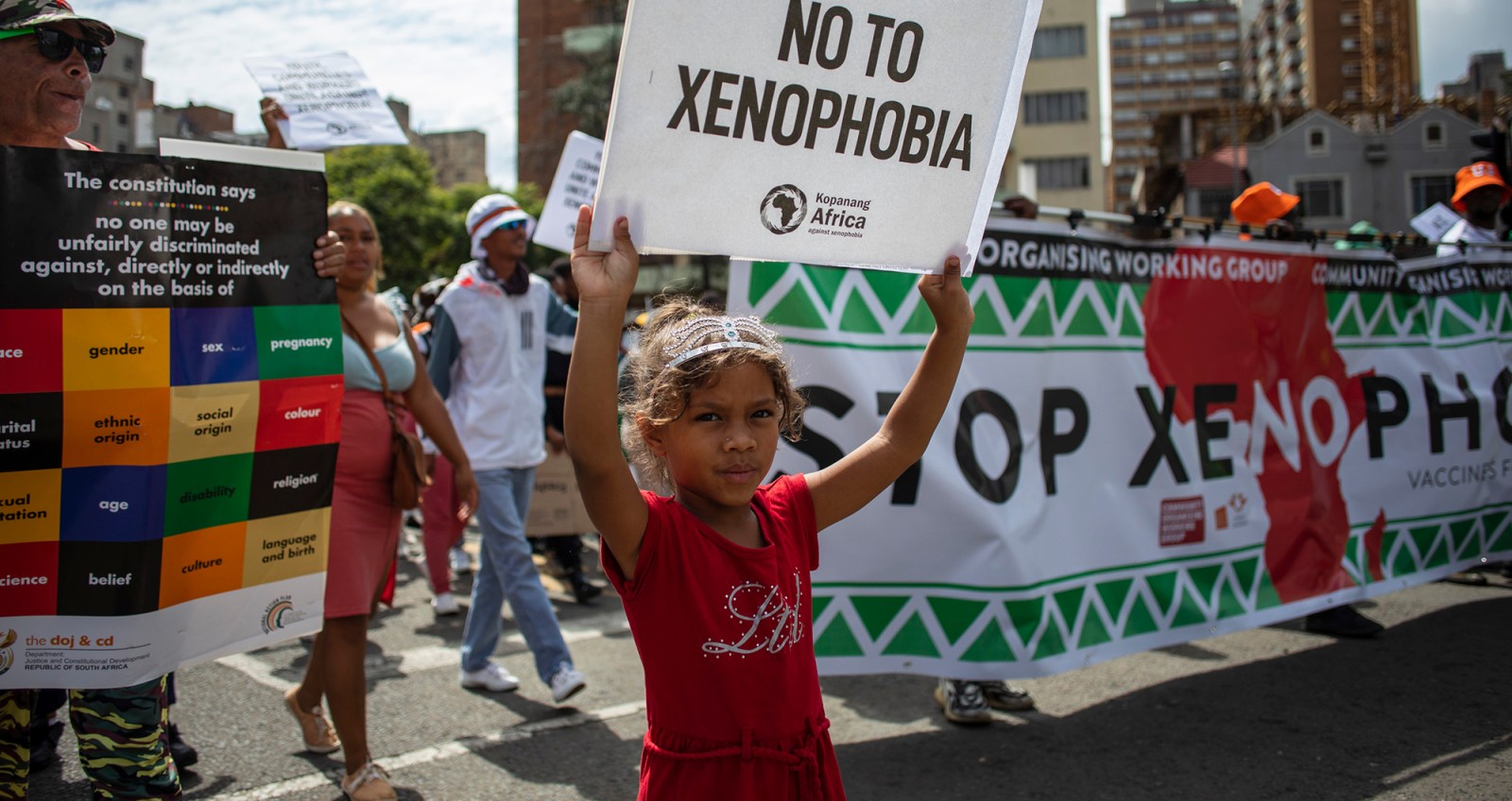 People take to the streets during a rally in Johannesburg on 26 March 2022 organised by the Kopanang Africa against Xenophobia organisation, calling for an end to ‘xenophobic sentiments and groups. (Photo: EPA-EFE / Kim Ludbrook)

Ever since the eruption of widespread xenophobic violence in 2008, the widely deployed claim that “foreign nationals are taking our jobs” is now accepted as fact by many. But statistics and research prove the opposite.

In and among the plethora of other claims directed at international migrants, such as being disproportionately responsible for crime and more particularly drug dealing, that of “taking jobs” has now come to dominate the general discourse of the latest crew of xenophobes.

These include Herman Mashaba and ActionSA; the Gayton Mackenzie/Kenny Kunene duo of the Patriotic Alliance (PA); the misnamed African Transformation Movement; the putative uMkhonto we Sizwe Military Veterans Association (MKVMA); the social media scoundrels of “#PutSouthAfricaFirst”; the so-called “RET” faction of the ANC; the ministries of home affairs and labour; and the most recent addition of political performance artist Nhlanhla Mohlauli and his “Operation Dudula” rent-a-crowd.

In one form or another, they have all engaged in an all-out propaganda war grounded in a concocted, pre-packaged and false narrative of “foreign nationals” as job-stealing villains.

Not only has such a narrative found fertile ground among significant sections of South Africans who are economically poor and politically marginalised, it has now been given some legislative content through the recently introduced National Labour Migration Policy (NLMP).

This policy will now “reserve” certain economic sectors for those who hold South African citizenship and set quotas “for the employment of documented foreign nationals in major economic sectors”.

This “job-stealing” propaganda package is, at one and the same time, de-historicised, deceitful and dangerous.

One of the crucial ingredients that sustains the false narratives of right-wing, populist demagoguery is the manipulation of history and facts, wherein political and socioeconomic context and content are selectively and manipulatively remembered and applied.

In this case, the xenophobes want people to forget or simply ignore the reality of a post-1994, anti-poor and anti-worker economic policy framework and practice (by both the public and private sectors) that has, over the past 25 years, led to the casualisation of work becoming the dominant feature of South Africa’s world of work landscape; and no more so than for international migrants.

It is this consciously planned and seismic shift in the world of work that has fed a continuous and intensified attack on the working conditions and quality of life for the vast majority of the workforce in South Africa, whether citizen or international migrant.

This has been further abetted by several other historical developments: the failure of the ANC-run state (at all levels of government) to solidify and sustain the provision of basic services and needs; the profit-at-all-costs, divide-and-conquer approach of employers; the proliferation of local economic and political mafias operating in the small retail and housing spaces; and foreign policies and actions in the region that have privileged support for oppressive political regimes and contributed to the destruction of local economies.

A comprehensive statistical study carried out by the Studies in Poverty and Inequality Institute in 2017 found that the “fastest rise in employment since 2008 has been in the informal sector”. The National Labour and Economic Development Institute estimated in 2019 that between 2000 and 2017, non-permanent work increased by an incredible 371%.

This historical trend has only been turbocharged by the past two years of pandemic-related socioeconomic austerity, out-of-control profit gouging and nationalist economic chauvinism.

Not surprisingly, it is this ever-expanding and hugely precarious world of casualised work — encompassing both the “informal sector” and certain parts of the formal sector — that “houses” the vast majority of international migrant workers.

These workers (including those fortunate enough to actually have the relevant documents) most often find themselves in positions of unstable, precarious employment.

This entails working for unscrupulous employers without any labour or legal protections, unable to access benefits, toiling for long working hours, being physically and otherwise abused, becoming indebted and earning very low wages.

Making matters worse for the majority is the general dysfunction and corruption of the Department of Home Affairs, which renders them “illegal” due to not having or being unable to access or renew the appropriate documents/permits.

This reality, alongside the limited availability of up-to-date statistics, makes it difficult to fully determine the number of international migrant workers in the country, not to mention associated work demographics and location.

Nonetheless, what is crystal clear is that the wild claims of tens of millions of undocumented/“illegal” international migrants flooding South African society and in the process, taking large numbers of jobs away from South African citizens, are nothing but damn lies.

Casting an eye over the past decade or so, a 2016 study by the South African Migration Programme found that “despite speculation about the penetration of migrant entrepreneurs in the informal economy, only 20% of informal economy business owners had moved to Gauteng [the province with the most international migrants] from another country. This means that fully 80% of informal enterprises in Gauteng are South African-owned”.

The study also stated that in respect of the entire workforce in Gauteng, 82% of the working population (ie 15-64 years old) were non-migrants, 14% were domestic migrants who had moved between provinces and just 4% could be classed as international migrants.

Moving forward, a comprehensive study by the African Centre for Migration & Society — using figures from StatsSA — found that there are two million international migrants (ie those who are foreign-born) of working age (15-64) in South Africa. This represents 5.3% of the entire labour force, most of whom are more likely to be informally employed.

More recently, in late 2021, Statistician-General Risenga Maluleke (responding to the latest claims of xenophobes) had the following to say: “If one uses the output of foreign-born persons enumerated in Census 2011 and adds to it the net international migrants for the period 2011-2016 as well as the period 2016-2021 from the 2021 mid-year population estimates one would get an estimation of 3.95 million persons. This includes migrants of all types and is collated regardless of legal status [and age].”

Besides blowing the generalised statistical lies of the xenophobes out of the water, all cumulative evidence gathered by professional/academic researchers over the past decade also destroys the equally specious arguments made by xenophobes that international migrants are a drain on the economy because they are not paying taxes and are abusing social/health services etc.

The truth is that a majority of international migrant workers actually have made and continue to make a positive economic contribution by providing jobs, paying rent, paying VAT and providing affordable and convenient goods.

It is hugely worrying that the bald telling of lies — whether here in South Africa or elsewhere — is fast becoming politically and socially mainstreamed. But it is beyond tragic that these lies are increasingly acting as the fire-lighters of intensifying conflict and violence, whether framed by xenophobia, gender, ethnicity, religion or sexuality.

As history has taught us, the more often lies are repeated, the more likely it is that increasing numbers of people will come to “believe” them and act accordingly. This is extremely dangerous.

Let us never forget what lies, repeated often and loudly, can incubate and feed. DM

Dr Dale T McKinley is a long-time political activist, researcher-writer and lecturer who works at the International Labour, Research and Information Group.