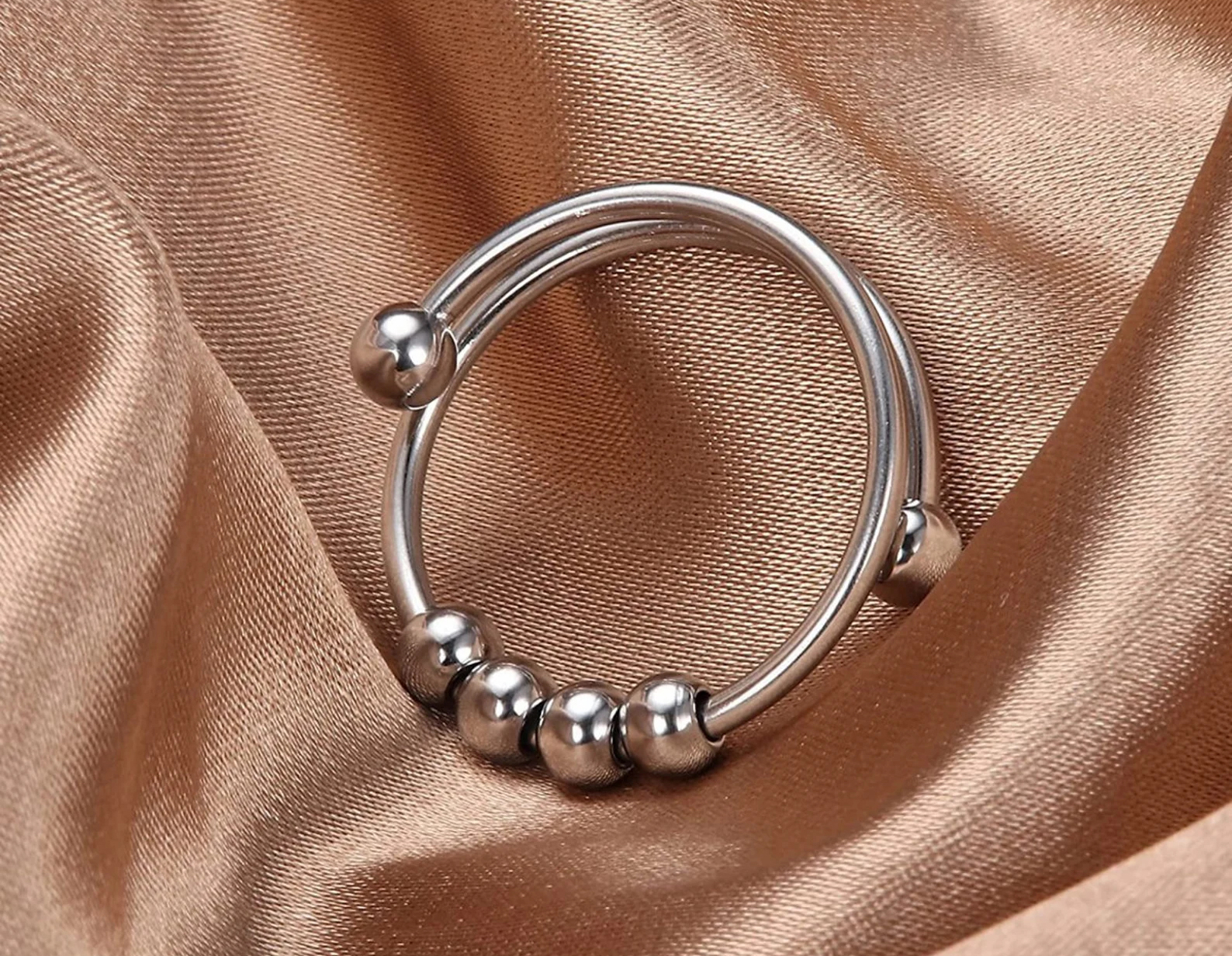 Anxiety rings went viral on TikTok, but do these new-fangled fidgeting objects live up to their name?

In the latter half of 2021, anxiety rings gained considerable popularity on TikTok, with millions of users sharing videos of their rings – or testimonials about how the rings helped them cope with anxiety.

By October, the hashtag #anxietyring had racked up some 30 million views. As of July 2022, that number has doubled – to 60.5 million views.

What exactly are anxiety rings?

These fidgeting rings come in various designs, from spinner rings to rings with metal beads that the wearer can spin around the ring or push back and forth. Although the current iteration has found viral fame, the concept is not entirely new.

The spinner ring, also known as a worry ring or meditation ring, is believed to go back hundreds of years to ancient Tibetan meditation traditions.

As a fidgeting object, the anxiety ring joins a long line of products that pop up in different shapes among different generations, such as stress balls, Newton’s cradle and fidget spinners.

Do they work? What do learned minds say?

For the sake of clarity, it’s important to note the difference between merely feeling anxious as a fairly common response to stress, and having an actual anxiety disorder such as Generalised Anxiety Disorder, Panic Disorder, Social Anxiety Disorder or a phobia-related anxiety.

That group of clinical disorders requires sound professional diagnosis and recommendations for treatment.

Unless your therapist includes a fidgeting object such as an anxiety ring as part of your treatment, it would be best to not rely solely on the recommendations of TikTok users and enterprising jewellers for help with an actual anxiety disorder.

However, when it comes to the relationship between fidgeting and calming feelings of anxiousness of the non-clinical variety, there is a body of research that points to the benefits of these “mindless” distractions from fidgeting through to doodling.

One 2006 study found that using stress balls had a calming effect on sixth graders and helped improve “their attitude, attention, writing abilities and peer interaction”.

Another study, published in 2009, found that doodling could aid in boosting memory.

Looking into the correlation between cognitive function and hand movement, there have also been a number of published studies as far back as 2005 and as recent as 2021, that have found handwriting may improve learning ability in a specific task – when compared to typing – leading one neurologist, Frank Wilson, to offer this summary of the findings:

“Any theory of human intelligence which ignores the interdependence of hand and brain function, the historical origins of that or the impact of that history on the developmental dynamics in modern humans, is grossly misleading and sterile.”

Building of the foundation from studies like the abovementioned and others, a pair of researchers, Michael Karlesky and Katherine Currie Isbister, embarked on an ongoing study in 2013 to find ways to create “fidgets widgets” – essentially digitised multi-purpose objects that replicate and  offer a greater variety of  “playful interactions embodying ‘mindless’ activities like doodling, fidgeting and fiddling”.

In the introduction to their paper, the duo summarise the many ways in which these seemingly minor mindless movements play a role in our daily work.

“Work today is as much cognitive exercise as it is physical exertion. We think, analyse and create in front of computing interfaces in our offices, classrooms, labs and studios. We observe from people at work that brainstorming engages forms of embodied cognition.

“We fidget with paper clips, tap pens, squeeze stress balls, doodle in notes, scoot mice about and generally play with any item at hand while we contemplate problems, draw connections, and await inspiration.

“Though we work by interacting with software, our thinking extends into a physical ‘margin’ space around our software through doodling, fidgeting and fiddling.”

While their work in the pursuit high tech all-in-one fidgeting solutions seems a world away from analog solutions such as anxiety rings, it reveals the role that fidgeting – and objects that enable fidgeting – play in daily activities.

In an interview with Woman and Home, psychologist and award-winning author, Dr Audrey Tang, also compares the effectiveness of anxiety rings to stress balls and other grounding objects.

“In principle, Dr Tang explains, an anxiety ring would seem to blend both the release and the grounding element of stress relief, which others can find helpful to bring a little headspace and sense of emotional regulation,” the author explains.

Importantly, however, Tang clarifies that rather than a cure for a condition, the ring becomes more of a sort of short-term relief, and one still has to do “the mental and emotional development work to alleviate the cause of the anxiety in the first instance”. DM/ML

In case you missed it, also read Fight, flight or freeze – recognising and understanding anxiety