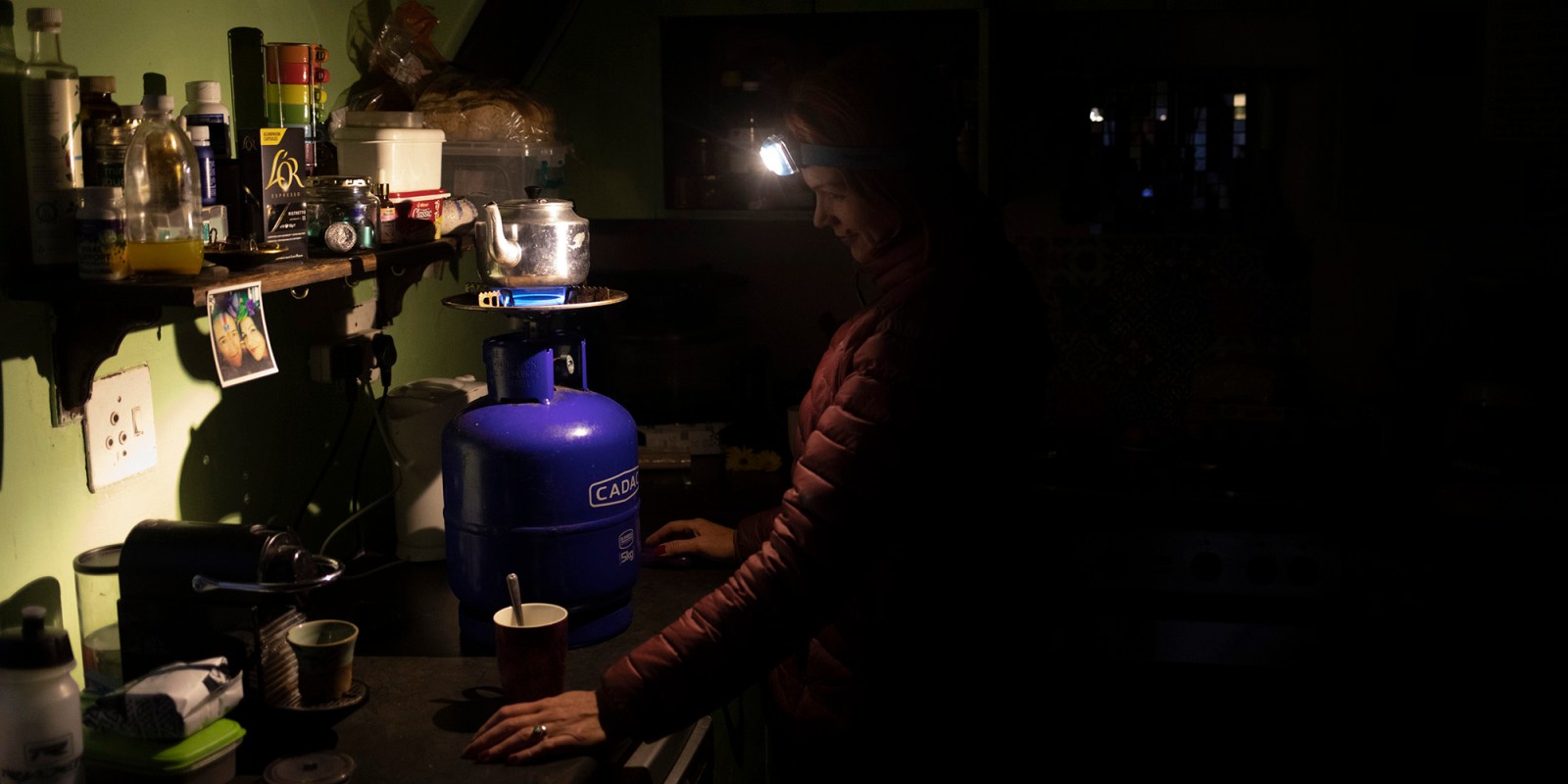 Hulda de Villiers, a graphic designer, cooks dinner on a gas cylinder after another power cut in her Johannesburg suburb on 28 June 2022. (Photo: EPA-EFE / Kim Ludbrook)

The City of Johannesburg is on a mission to improve its electricity infrastructure after years of cable theft and substation vandalism. The move is considered strategic in preparing for independent power producer energy supply and diversifying the city’s energy mix.

As South Africa endures continued rolling blackouts, the City of Johannesburg has allocated R1.6-billion to secure its unstable energy grid for the next financial year, readying itself to acquire additional energy supply from independent power producers (IPPs).

“That’s a substantial amount of backlog that we can never catch up [with], but we need to start somewhere,” said Sun. “So this year we’ve dedicated R1.6-billion in terms of infrastructure investment. That will go into both restoration and repairs of the existing infrastructure, and also the investment into new infrastructure; installation of your new cables, new substations, mini [substations], and so on.”

He blamed the current backlog on many years of neglect, cable theft, vandalism of substations and rife infrastructure damage. In the 2020/2021 financial year alone, the city was hit by cable theft amounting to more than R14-million which left hospitals and residential areas in the dark.

Increased levels of load shedding, that have reached Stage 6, come as areas such as Eldorado Park and Northriding have extended blackouts as a result of failing substations and cable theft.

Sun said the problematic Hursthill substation, which fed many areas, had been made a priority project for the newly allocated infrastructure improvement funds. Another priority is Eldorado Park, where a new R160-million substation is being built. This is expected to be completed by the end of the year and will, hopefully, stabilise the power issue in many areas.

As the city fixes its energy infrastructure, it is also making plans to integrate IPPs into the energy supply network.

“It is very important that we move away from these fossil fuel types of power generation. Of course, you know we are solely reliant on Eskom at the moment as our power supplier. We receive from Kelvin [Power Station], which is our independent power producer, about just under 15% of the supply, which is also a coal-based power plant.

“So, in moving away from that not-so-green energy we want to look for renewable alternative sources, greener energy for the city of Johannesburg, and there are options out there,” Sun said.

He said a strategic plan for IPPs would be completed in about three months and a tender process would be ready in about six months.

According to Chris Yelland, energy analyst and MD of EE Business Intelligence, it is necessary for the city to repair its current infrastructure to prepare for the integration of alternative energy from the likes of renewables.

“It’s all well and good to switch to renewables, but you still have to deliver to the customer, and that needs a network; that means cables and substations and municipal grids. It [all] needs to be in good shape. It’s no good neglecting cables and theft. If there’s cable theft taking place it doesn’t matter how much generation you have, whether it’s renewables or anything. So yes, they do need to address their maintenance backlog,” Yelland told Daily Maverick.

Renewables do not make up any part of Johannesburg’s energy mix yet. The city gets most of its electricity from Eskom and about 2%-3% from biogas produced at Goudkoppies Landfill Site. Solar is at the top of the list in terms of diversifying, with wind, gas and hydrogen energy also considered viable, Sun said.

Yelland said biogas would not be a significant contributor to the mix, though it could be helpful. He believed the big opportunity for the city would be adding 20-30% via solar energy plants that could be installed on old, vacant, mine dump land — reducing high carbon emissions and reliance on Eskom.

Eskom told Daily Maverick, however, that while additional power helps cut load shedding, “it must be noted that the additional power from self-dispatched renewable energy projects may not necessarily be aligned with the times that the system requires the power (ie during the system peak demand periods)”.

Yelland described this comment as “a whole lot of smoke and mirrors from Eskom’s side”.

He said that solar, for example, could reduce demand on Eskom during daylight and therefore result in less load shedding during the working day, with battery energy storage being a solution to load shedding in the evenings.

Sun said integrating IPPs would shield Johannesburg residents from high levels of load shedding, as seen in Cape Town, where residents were subject to Stage 4 load shedding while the rest of the country had Stage 6.

He said another reason for Johannesburg seeking new suppliers was because the purchase agreement with the current IPP —  Kelvin Power Station — was soon coming to an end. DM/OBP