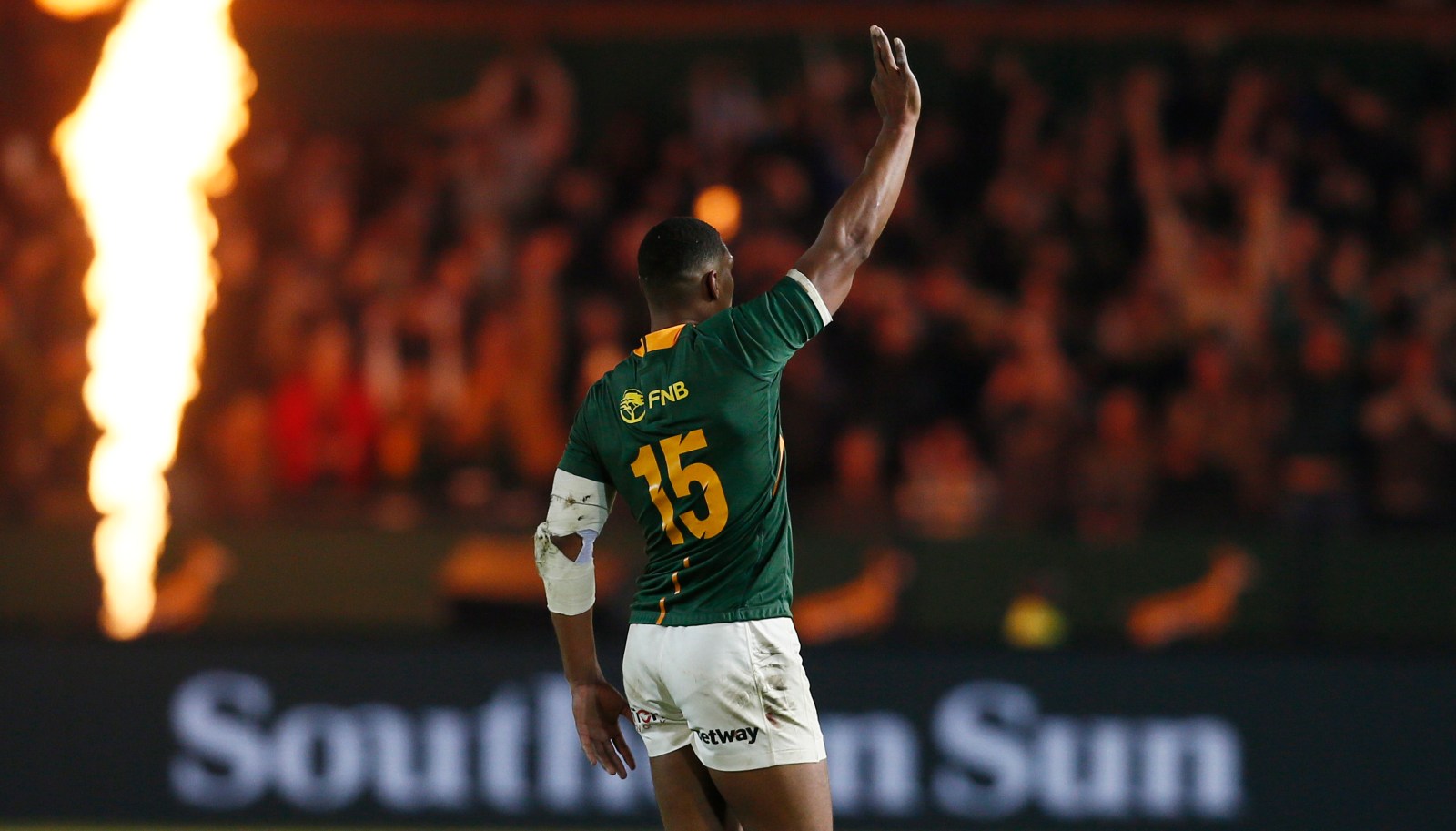 Damian Willemse of South Africa celebrates after scoring the winning penalty against Wales during the Castle Lager incoming series on 2 July 2022 at Loftus Versfeld in Pretoria. (Photo: Felix Dlangamandla)

The Springboks scored 29 second-half points, overcoming an 18-3 half-time deficit to beat Wales in the first of three Tests played at Loftus on Saturday.

Damian Willemse’s ice-cool nerves to slot an injury-time winning penalty will surely have cemented his name in future team sheets as the utility back extraordinaire.

The Boks escaped with a win that they almost didn’t deserve after an abject first-half performance riddled with errors. But they showed their fighting spirit until the end, clawing their way out of a deep, deep hole thanks to the introduction of the famed “bomb squad” and Wales’ own poor discipline.

Wales suffered their 11th consecutive defeat in South Africa and they might never have a better chance again after meeting the rusty Springboks, playing for the first time in eight months.

The Boks took the lead for the first time in the 75th minute when Georgian referee Nikia Amashukeli awarded a penalty try after Wales collapsed a rolling maul.

Wales also endured four yellow cards in the match – three coming in the final quarter and two in the final five minutes – as their discipline undid their good work.

Despite the Boks taking the lead from the 75th minute penalty try, a 12-man Wales (Alun Wyn Jones, Rhys Carre and Louis Rees-Zammit were in the sin bin) earned a penalty after the restart. Lock Wyn Jones returned to the field in time to run the lineout and Wales mauled over with a try for hooker Dewi Lake.

Captain Dan Biggar then missed the conversion, which proved costly. Biggar, who earlier earned a yellow card for dissent, was the perpetrator of the final penalty when he slapped down a Bok pass, setting the stage for Willemse to seal victory.

Bok coach Jacques Nienaber said that Willemse has this July series against Wales to secure his place in the 23 as the utility back of choice, and he delivered.

As starting fullback, he overcame a slightly nervous start even though the Boks were on the back foot. After the break, Willemse was asked to step into the flyhalf channel after Elton Jantjies was hooked after an abject 40 minutes. Willemse revelled in playing close to the gain line as the momentum shifted the way of the world champions. He landed a crucial touchline conversion as well.

Four second-half tries told the story of the Boks’ dominance after the break – two from rolling mauls through hookers Bongi Mbonambi and Malcolm Marx, and one for wing Cheslin Kolbe. The little flyer latched on to a clever Damian de Allende grubber for the score.

But before half time it was a different story. It was all Wales and only their own poor discipline, and lack of composure cost them a historic first win in South Africa.

It’s a long time since the Boks have played so poorly in a single half of rugby. In fact, it hasn’t happened since the dark days of 2016, but at Loftus the world champions didn’t arrive for the first 40 minutes and found themselves in a deep hole.

Nothing worked. Jantjies had a miserable time at flyhalf, spraying inaccurate kicks, missing a crucial 50-50 ball that led to Wales’ second try and missing two relative sitters at goal. He also punted a crucial penalty for touch, into the dead-ball area, releasing pressure on Wales at a time the Boks were starting to gain some momentum in the match.

Jantjies was the most glaring symptom of a Bok team that misfired like a car that hadn’t been serviced since the turn of the century, but the lineout maul was stopped in its tracks by a determined Welsh pack.

The visitors’ line speed on defence also stopped the few attempts to move the ball wide and their defence close to the line was superb. Wales bossed the breakdown in the opening stanza and by means both fair and nefarious they slowed down quick Springbok ball.

In short, for one glorious half, Wales beat the Boks at their own game.

Wales deservedly led 18-3 at the break after two tries from wing Rees-Zammit, the first coming just three minutes into the match.

Wales showed their hand in the opening 180 seconds of the clash, kicking three contestable kicks, two of which the Boks failed to deal with. First No 8 Jasper Wiese spilled the ball and then Willemse followed.

Willemse’s mistake was mitigated by the fact the Boks won a penalty immediately afterwards. But ironically it would lead to the opening try of the match.

Having kicked for touch, the Boks set up a lineout, which lock Lood de Jager won. But as he tried to present the ball, he lost control, dropped it and, from the turnover, Wales took the ball through a few phases. They manipulated enough space for Rees-Zammit to score down the right and silence the 51,762 fans.

But Wales needed to sustain that level of intensity for the full 80 minutes against the world champions on home soil. And they couldn’t.

Wiese and lock Lood de Jager were powerful carriers and when the “bomb squad” entered battle after the break, the Boks turned the momentum of the clash their way.

Debutants Elrigh Louw and Salmaan Moerat both played neat cameos in the short time they had, while the old head of Willie le Roux was essential.

His calm control and ability to be a playmaker opened the game up and freed Willemse to pull the strings.

A cold, long analysis of the match will show Nienaber and his staff’s many glaring errors, but it will also show a team of determined fighters. They can build and grow on that foundation.

For Wales, there will only be regrets because they did enough in the first half to win it. Against a lesser team, they would have won. But the Boks, despite a poor half, are not a lesser team. DM