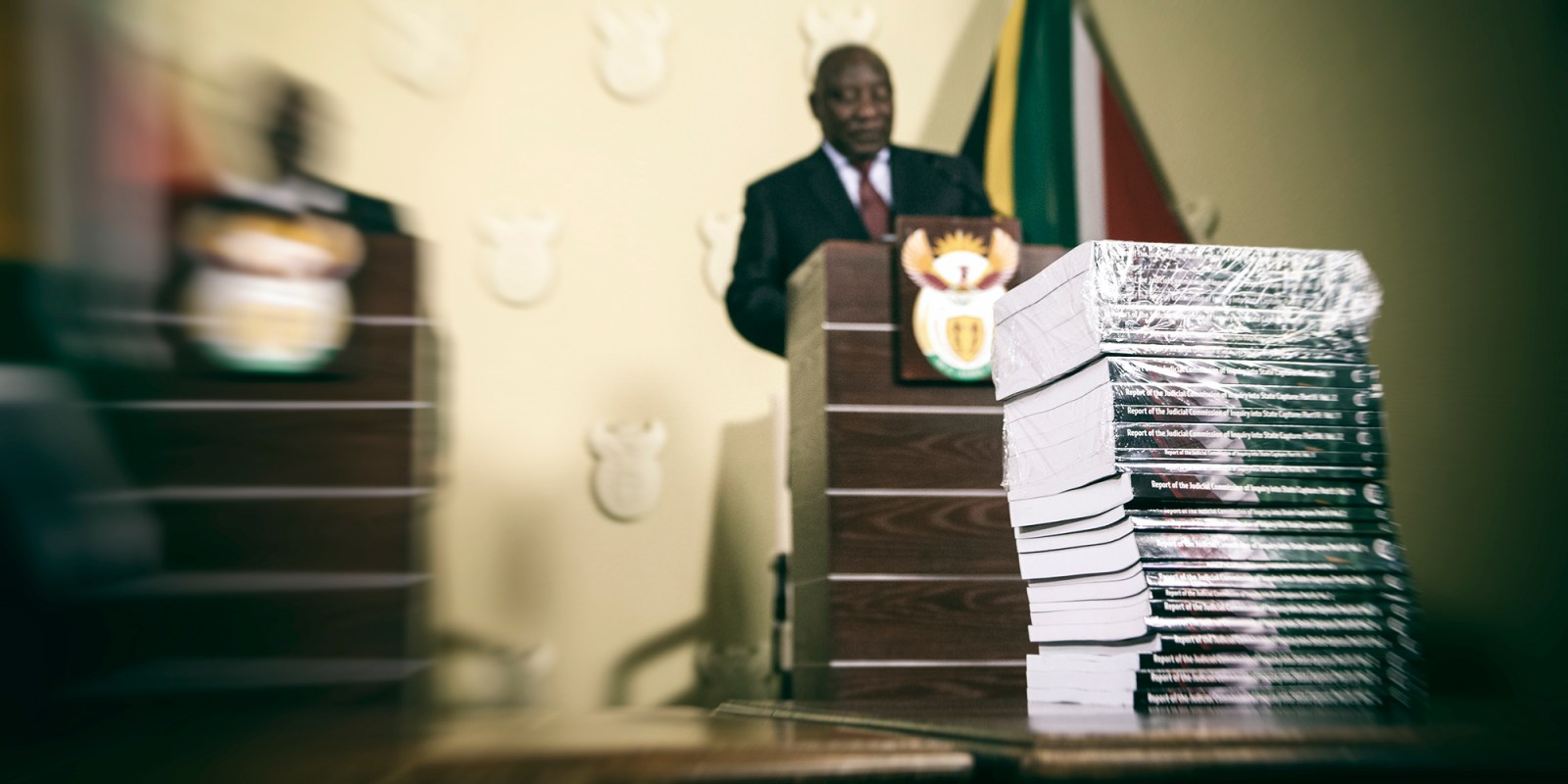 President Cyril Ramaphosa receives the fifth and final report from Judge Raymond Zondo of the Judicial Commission of Inquiry into Allegations of State Capture, Corruption and Fraud in the Public Sector including Organs of State at the Union Buildings on 22 June 2022 in Pretoria, South Africa. (Photo: Gallo Images / Alet Pretorius)

The State Capture Commission has referred more than 200 people to law enforcement for further investigation. Despite strong evidence of wrongdoing, some still hold high-powered jobs in government.

In her capacity as a senior official in the Department of Correctional Services, Nontsikelelo Jolingana allegedly received regular bribes of R100,000 in cash for unlawfully extending lucrative contracts awarded to logistics company Bosasa.

Today, Jolingana is a top executive at the Road Traffic Management Corporation (RTMC) who is recorded in the most recent RTMC annual report as having taken home a salary of almost R2.2-million in the 2020/21 financial year.

RTMC spokesperson Simon Zwane confirmed to DM168 this week that Jolingana’s position at the government roads agency is that of “General manager: Law enforcement norms and standards”.

Jolingana is not alone. Although the majority of high-profile names implicated in State Capture by the findings of the Zondo Commission are no longer in the posts they held when the alleged misconduct occurred, a number of lesser known individuals are still taking home generous government salaries in senior state roles.

The Zondo Commission has produced a long list of people that the National Prosecuting Authority (NPA) might be able to prosecute criminally for their alleged involvement in government corruption.

Those named are drawn from both the government and the private sector. The list amounts to a cross-section of South Africa in terms of race, age and gender.

Those recommended for potential prosecution are not simply there because a commission witness accused them of wrongdoing. The Zondo report has identified these people because an assessment of the available evidence and the balance of probabilities suggests that they have a real case to answer.

It is highly unlikely, however, that the NPA will have the capacity to prosecute all the suspects referred to it.

Complicating matters is the fact that some of those listed have since emigrated. Notable among this group is the Bosasa consultant William “Danny” Mansell, who was in effect exiled to the US in 2013 by Bosasa boss Gavin Watson once it became clear that Mansell was too rattled by a Special Investigating Unit (SIU) probe into Bosasa’s prisons contracts to be trusted.

The Zondo Commission heard that another Bosasa employee accompanied Mansell on his flight to the US to ensure he left the country. US company records suggest that Mansell has since established his own construction business stateside.

Others implicated by Zondo have since died – such as former Eskom chair Ben Ngubane, who died from Covid-19 in July last year.

There are many lesser known figures fingered in the Zondo report who appear to have simply dropped out of sight, with few online clues available to their whereabouts.

A DM168 investigation suggests that multiple former government executives accused of serious wrongdoing in State Capture have since taken their services to the private sector, generally in the form of establishing their own businesses or consultancies.

Phetolo Ramosebudi was one of the public servants recommended for potential prosecution for allegedly corrupt activities while treasurer of first the Airports Company South Africa and then Transnet.

Today, he is the CEO of his own investment company, Rams Capital, and cites “a decade and a half of experience in executive positions” on the company website.

Former Eskom chief executive Matshela Koko, identified by Zondo as having allegedly acted “in the interests of the Guptas and their associates … rather than in the interests of Eskom”, has also struck out on his own, with his entrepreneurial sights seemingly fixed on Zimbabwe.

Koko told Pretoria News this week: “I will not work for any state-owned enterprise again,” owing to his “treatment” at the hands of government. He has previously referred to his current project as his “destiny”.

In some cases, there is a dark irony in the expertise now claimed by former government officials.

Former Eskom senior manager Ayanda Nteta is implicated by the Zondo findings in terms of her alleged involvement in having unlawfully awarded the Guptas a coal contract to supply Eskom, which ended up damaging the workings of the Majuba Power Station because of poor-quality coal, and causing “financial prejudice and loss” to the power utility.

Today, Nteta runs her own consultancy business focused on “supply chain innovation” and promises to help organisations to save “millions of dollars”.

DM168 has established that some government employees are still in the positions they held during State Capture, albeit with some legal caveats.

One such example is Mnikelwa Nxele, the KwaZulu-Natal prisons commissioner classified by Zondo as someone whose conduct with regard to Bosasa amounts to a “prima facie case of corruption”.

The Zondo Commission heard that Nxele was paid R57,500 a month by Bosasa to ensure the continuation of Bosasa’s prisons contracts, though Bosasa whistle-blower Angelo Agrizzi claimed that Nxele was “very unhappy” at what he considered an unacceptably low-value ongoing bribe.

Department of Justice spokesperson Chrispin Phiri told DM168 that Nxele is on suspension because of an unrelated internal disciplinary matter, but he confirmed that Nxele remains on the department’s payroll in his position.

The NPA almost immediately suspended Lepinka once the allegations were aired at the Zondo Commission, but she successfully won reinstatement.

The NPA is awaiting the outcome of criminal proceedings on the matter, but spokesperson Bulelwa Makeke said Lepinka is still employed in the same role.

Others have moved on to different public sector positions.

Dikeledi Tshabalala, who worked in procurement in the Department of Correctional Services, was also accused by Zondo of presenting a prima facie corruption case as a result of her alleged acceptance of R15,000 a month from Bosasa to look after the company’s prisons contracts.

Tshabalala is now the chief director for supply chain management in the Department of Health.

Asked whether her current role would be affected by the Zondo allegations, health spokesperson Foster Mohale said: “Please note that we haven’t studied the final State Capture investigation report findings, but will do so. However, if any of the current departmental official(s) are found to be implicated in the report, the department will seek legal advice from the state law advisers on how to handle the matter since the department is not implicated.”

It is a similar approach to that of the RTMC, the government agency in which Nontsikelelo Jolingana now holds a plum role after allegedly serving as a Bosasa lynchpin.

RTMC spokesperson Simon Zwane told DM168: “As the [Zondo] report has not been referred to the RTMC for any action, our position at this stage is that we will await the outcome of the processes to be undertaken by the NPA in this regard.”

In service of a higher power

A few of those named by Zondo now appear to consider themselves in the employ of a significantly more senior boss.

Thulani Dlomo, the former head of the State Security Agency’s (SSA’s) special operations unit, pronounces on his LinkedIn page that he has “set his heart to serve his continent and represent the Kingdom of God here on earth”.

Dlomo is accused of an unusually wide range of wrongdoing while at the SSA, ranging from theft to the illegal use of weapons and ammunition from the SSA armoury.

Short-lived Eskom CEO Sean Maritz, meanwhile, was ordained as an “apostle” of a Christian sect called the Old Apostolic Church in December 2019, according to a Facebook post from the church.

Maritz, who served as Eskom CEO between October 2017 and March 2018, is implicated in “at least a prima facie case of attempted theft or fraud” as a result of signing an unlawful agreement worth almost $22-million between Eskom and China’s Huarong Energy Africa. DM168