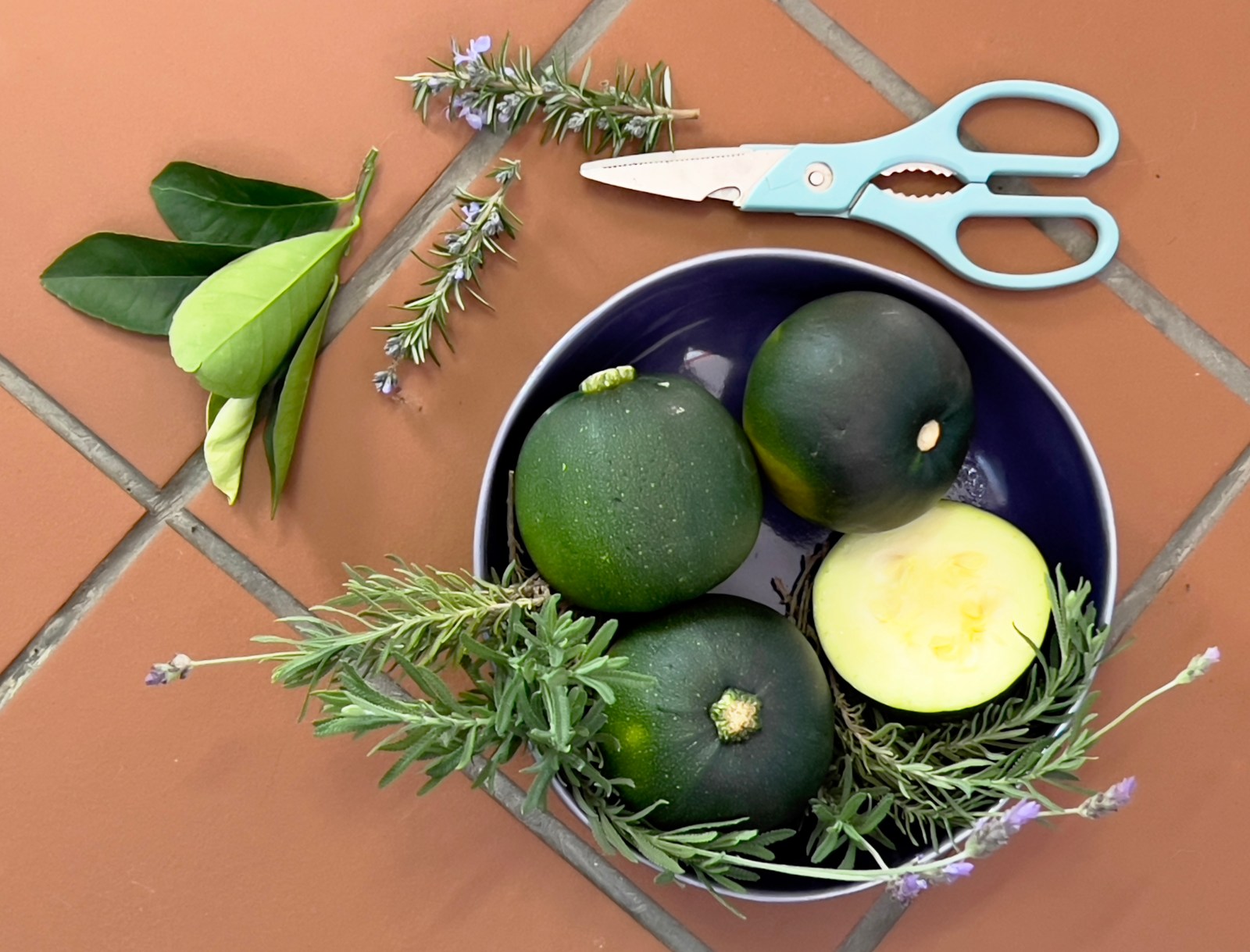 It was a startling sight, to some even heartening, a man walking off a plane at Cape Town airport, arrowing through the crowd holding a round green orb in each hand. This was how I was to identify a guest who was arriving from Italy.

The guest had corresponded with my ma on what he described as a “divine” vegetable. It was what we call the gem squash. He was coming to Cape Town especially because of the gem squash, that round green, charismatically challenged vegetable, that I have only ever eaten in South Africa. He wanted to collect the seeds so he could grow them in Italy.

Of course, there are squashes all over the world, long ones, short ones, curved ones, striped ones, and today the market is full of strange dark green Hubbard squashes that are full of warts, candidates for monkey pox. There is of course the ever-present butternut squash but the most wonderful one of all is the gem squash or sometimes known as the Rolet Gem Squash: scientific name – Cucurbita pepo.

It does appear occasionally in other countries, often in heavy disguise. I remember once staying with my family in, I think, Abu Dhabi, in a hotel called The Rolex which made us giggle. For dinner there was a vegetable that was not instantly recognisable, it was squashy and round and yellow and sort of mushy. Large pieces of red pepper and chilli had been stuck into it. My mother said to the waiter whose elaborate headgear had fallen over his eyes (he might have been asleep), “What is this vegetable?” The waiter said he would ask the cook. Finally, the cook came out holding a green gem squash, “This very expensive, very hard to peel,” he said with an extravagant smile.

We tried not to laugh. He had peeled a gem squash before cooking? It became a family joke; shall we cook some squash tonight? Very hard to peel, we would all scream.

I remember this incident particularly because the next day both the cook and waiter were absent and when we asked, we were told, “They have gone to the executions.” Somehow, I now always connect the gem squash with executions, arising in my body a mild excitement and fear.

South Africa might lack a lot of things – electricity for example – but it has one thing that is seldom seen in any other country, although it surely must exist, and that is the gem squash. The first thing my mother used to ask for when she visited me in Cape Town was a gem squash.

I am a boiler. I grew up on boiled food. My first instinct still is to chuck everything in water and put it on the stove. A cook friend tells me that it is English cooking. Perhaps. But I am not English. I think it is more likely lazy cooking.

The gem squash loves to be boiled, it gives it a frisson, it blossoms in the heat and turns a mellow yellow inside. I have always been an advocate of bland food (mashed potato can make me sweat with longing) and the gem is as bland as a dime that has been in someone’s pocket too long.

I watched a friend cook a tiny leg of lamb using a whole bulb of garlic. And don’t talk to me about the over used chilli. These garnishes should be used like scent, a gentle spray you walk through, never applied directly on the skin.

No, more garlic will not make your meal taste better.

Food bleeds into daily life constantly and yet it is often very difficult to describe. Take for instance the gem squash. It tastes like nothing; it tastes like everything.

The taste of a gem squash, especially if it’s a rather elderly squash, is sublime. It has an ingenious smell, slightly nutty, and scraping around the hardened carapace you come on scraps of squash that have a particular texture that I love; roughened but sweet, a pat ball of flavours that strides through the body.

And then there is the colour, that buttery yellow. I am so enamoured of the squash that I have plans to paint my whole flat a lacquered squash colour with mint trimmings. It will be tantalisingly divine, mixed with some pumpkin-coloured cushions.

The new word on the block is optics. It roughly means the way things look to an outsider, especially in politics. Boris Johnson apparently has brilliant optics. Well, sadly, the humble Hubbard and the gem do not have brilliant optics. One could say they have no optics at all.

Personally, I think squash is best served with few garnishes except a sprinkle of nutmeg. It has an adorable taste. I have never met anyone who did not like squash but it is also true that we have taken squash, particularly the small gem squash, for granted and not experimented enough with it. A friend makes a squash cake. In Belgrade, I was often offered a piece of pumpkin with my tea or coffee. A piece of pastel coloured squash sponge would be delicious.

Although to some the squash might be heavenly; others disagree.

A friend says the squash is ditch weed stuff. He has a theory that all the chemical runoff from the farms roll into the ground and are sucked up by these mean, greedy, easy-to-grow plants. He maintains that the gem squash can give you a high.