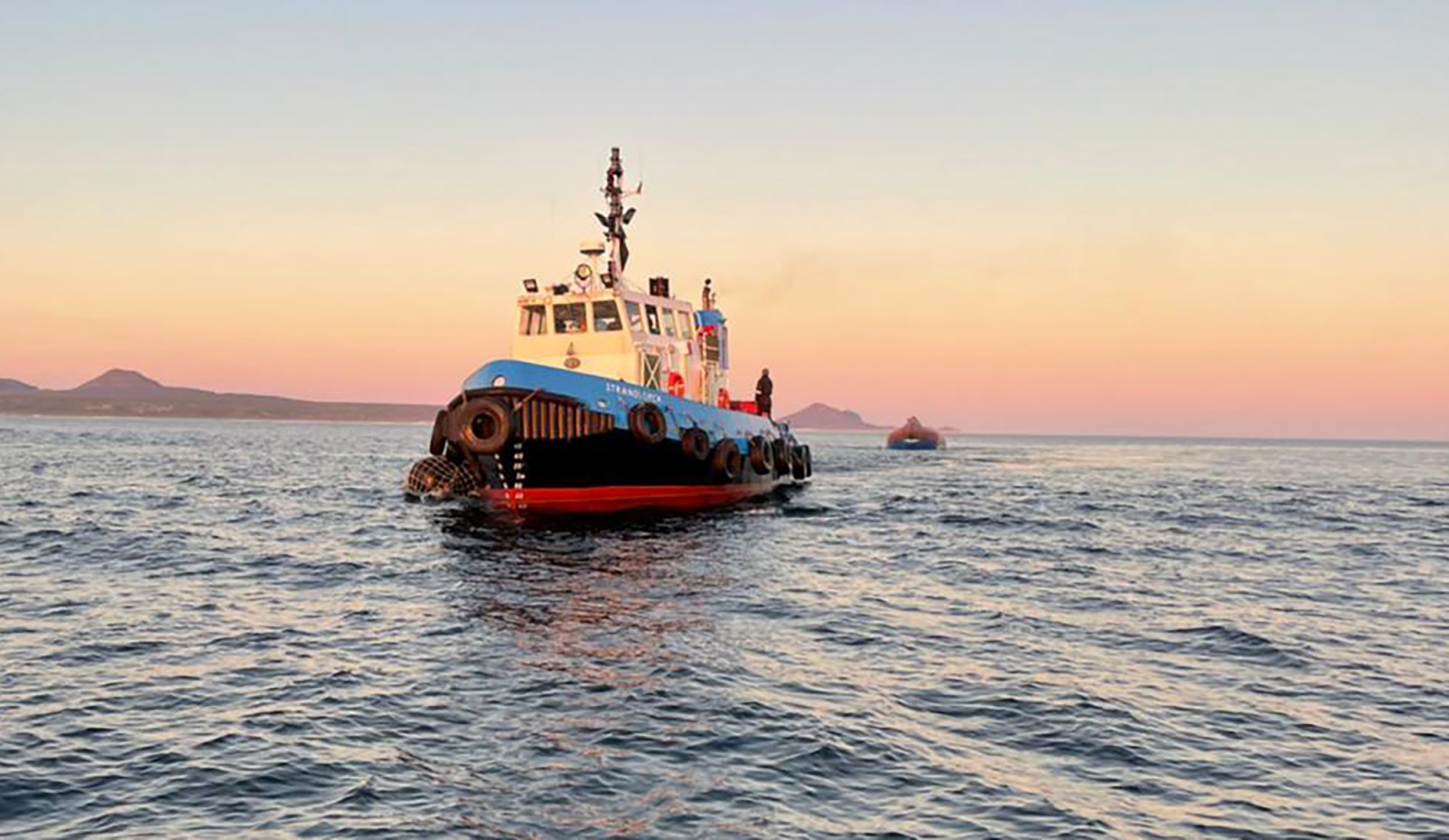 What started as a normal fishing trip on Sunday was to end sometime on Wednesday night when salvage operators expected to finish towing a stricken vessel to Cape Town harbour. The Restless Wave capsized off the coast of the Cape Point Nature Reserve at the weekend.

Early on Sunday morning, the Saldanha Bay-registered vessel, the Restless Wave, capsized eight nautical miles south of Cape Point. It happened quickly, with the National Sea Rescue Initiative (NSRI) saying: “It is believed that the vessel capsized in under a minute.”

The good news is that none of the 12 crew on board was injured and all were rescued by nearby boats. The bad news was that the vessel, with a fuel capacity of 45,000 litres, was stranded upside down, threatening marine life in a biodiverse and protected area.

These initial fears are subsiding as the salvage operation comes to an end.

The South African Maritime Safety Authority (Samsa) confirmed in a statement that they are “investigating the capsizing of a fishing vessel resulting in the rescue of 12 fishermen”.

The fishermen were transferred to shore following a rescue operation involving two Oceana vessels, with coordination from the Maritime Rescue Coordination Centre.

“The fishing vessel, Restless Wave, is still afloat off Cape Point and a navigation warning has been issued to vessels around the area. A salvage operation is underway to recover the vessel,” read the Samsa statement.

Ramatjie confirmed that “all twelve crew were rescued by three fellow fishing vessels operating nearby to the casualty, no fatalities or injuries reported. All the crew have been returned to their home port of Laaiplek at the mouth of the Berg River.” The vessels that came to the rescue are Oceana Concord, Oceana Mercury and Alert III.

“MRCC informed NSRI that there were fellow fishing vessels in the vicinity and that they were reacting to assist. While all three NSRI rescue stations were preparing to launch sea rescue craft, confirmation was received, from Telkom Maritime Radio Services and by MRCC, that all 12 crew were accounted for and safe onboard three fellow fishing vessels.

“NSRI Simon’s Town was stood down after confirmation was received that none of the 12 casualty crewmen were injured.

“During daylight on Sunday morning, NSRI Kommetjie dispatched the sea rescue craft Spirit of the Vines and located the capsized fishing vessel. A life raft, located in the vicinity, and lighting, were secured to the upturned hull by NSRI. A second life raft was located adrift, offshore of Platbos, Cape Point, and that life raft was recovered on to the NSRI rescue craft and brought to NSRI Kommetjie rescue station,” said Zimmerman.

Ramatjie explained what happened next.

“The owners have appointed a local salvage company to recover the vessel, who are on location, and there are two fishing vessels on location to assist in recovering the fishing gear,” he said, adding that “operations are ongoing at present; the safe removal of the fishing gear has presented some challenges, which the salvors’ divers are resolving.”

In a Facebook post, GMC said, “On Monday 27 June, GMC mobilised an assessment team on an inflatable RIB dive vessel. On Tuesday 28 June, GMC mobilised MV Strandloper (19.7m twin screw tug) to the site. Status is that the inverted Restless Wave is secured to the seabed by the large purse seine net.

“The vessel is stable and in the current state there is little pollution risk.

“Any effort to cut into the vessel to remove pollutants will increase environmental risk. The objective is to disconnect the net and tow the inverted vessel to port, where the vessel is to be righted.

“The net is to be recovered by another fishing vessel equipped to handle large nets.”

Jean Tresfon, a marine conservation photographer who was one of the first to catch sight of the capsized vessel, explained that Restless Wave is a “purse seine” vessel.

“Purse seiners catch pelagic species such as sardine, anchovy, herring… They use nets that surround the target species on the surface, hang down in the water and then are drawn closed from the bottom. They are one of the most tightly monitored fisheries and have relatively low levels of bycatch.”

It is precisely this fishing gear that informed how the salvage plan was to be undertaken.

The salvage plan was as follows:

Lorenzo Guerrini, a commercial diver with the GMC, said on Wednesday: “On Sunday morning, we were out there ready to do our initial inspection and we found that vessel had snagged to the seabed.

“So yesterday and today, we sent our tugboat out there to hook up and secure to the vessel and then our divers removed the neck from the seabed… and we are currently on our way to Cape Town harbour,” said Guerrini.

Asked about possible environmental impact, Guerrini said they were travelling at a relatively slow 1.5 knots to keep the ship steady. He said that “there was nothing environmentally impacting. The vessel is very much intact…

“All of its holes were sealed quite nicely, and that’s what kept the vessel afloat. So nothing has leaked out of the vessel.”

SANParks’ Lauren Clayton said “the risk to marine life is low at this stage, but we will continue monitoring the progress of the impacts caused during the rescue/removal of the vessel to the nearest port.” DM/OBP