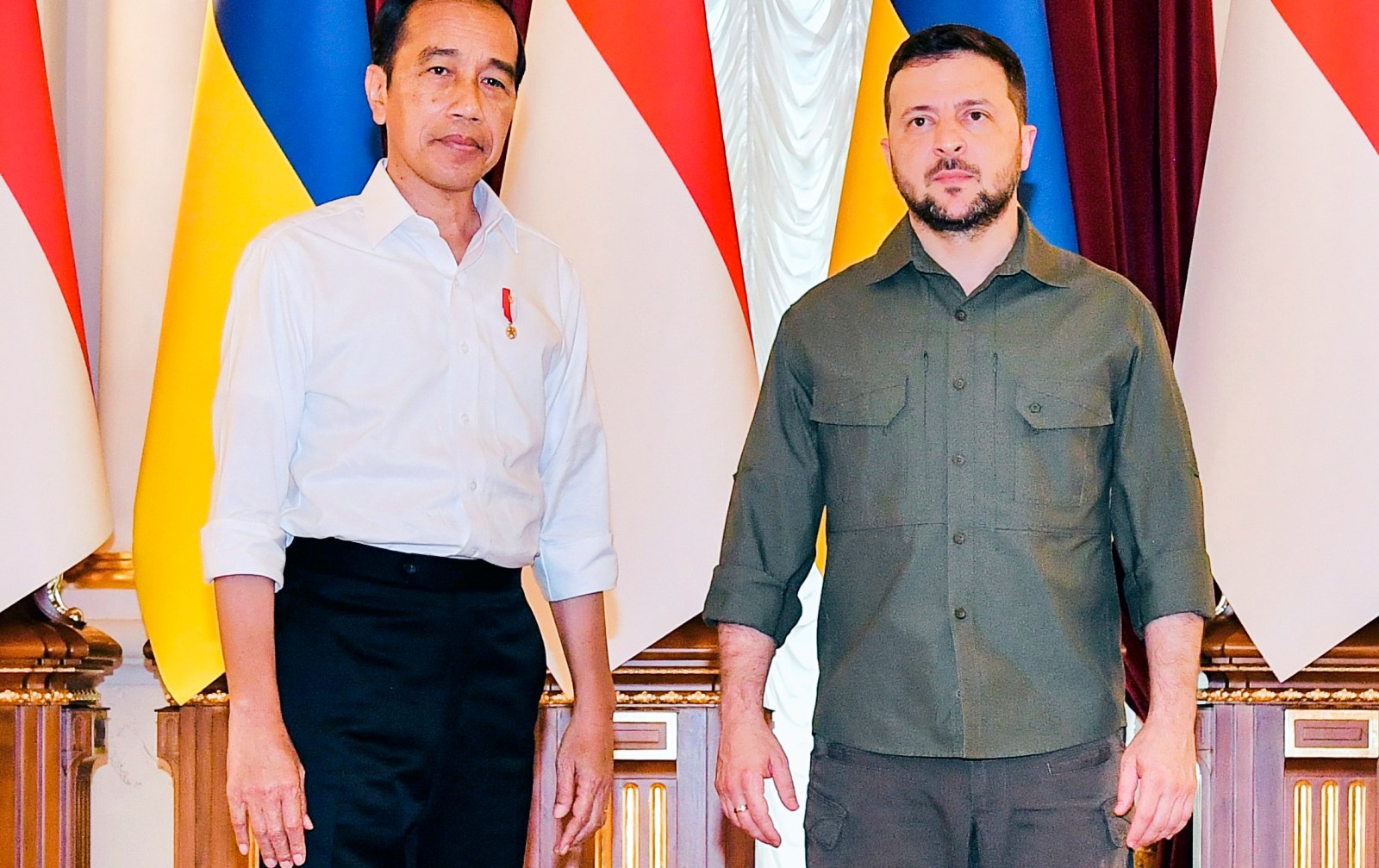 Nato laid out plans to boost forces in Europe by placing about 300,000 troops on high alert to counter Russian aggression as leaders from the 30-member military alliance held talks in Madrid.

Finland and Sweden were formally invited to join the North Atlantic Treaty Organization (Nato) during the group’s summit in the Spanish capital, Madrid, after Turkey dropped its opposition, all but ensuring Nato’s expansion on Russia’s doorstep.

Indonesian President Joko Widodo met in Ukraine with President Volodymyr Zelensky, becoming the first Asian leader to visit since the Russian invasion. Widodo, who will host this year’s Group of 20 summit, was due to visit Russia on Thursday. He offered to bring a message from Zelensky to Putin, according to a statement.

Kremlin forces are pressing ahead with their goal of occupying all of the Donetsk and Luhansk regions. The Russian military is closing in on Lysychansk, Kyiv’s last major foothold in the Luhansk region. Russian missiles continued to strike Ukrainian cities away from the front lines, keeping up a barrage that has intensified over the last several days.

British surveillance aircraft could help Ukraine get grain out of the country by securing shipping routes, UK Defence Secretary Ben Wallace told reporters in a briefing at Nato.

Rivet Joint or P-8 Poseidon reconnaissance aircraft could be used in areas of the Black Sea to protect ships in leaving Ukraine’s blockaded ports, Wallace said. Turkey, which controls access to key straits of the Black Sea, is trying to “hammer out details” with Russia, along with the United Nations, about allowing Ukrainian grain ships to leave, he added.

Wallace played down chances of Royal Navy warships being sent to the Black Sea: “That would mean we would ask the Turks to lift the blockade on foreign warships or warships from other fleets.”

US sees long way to go on freeing up Ukraine grain

The US thinks efforts to free up Ukrainian grain for global markets still have a long way to go, National Security Council spokesman John Kirby said in an interview on Bloomberg Television from Madrid.

“We are working very very hard with partners all around the world to try to see what we can do to get more grain out of Ukraine,” Kirby said. “We have helped increase the flow by ground, by rail, out of western Ukraine, but that’s not enough. We know that. And we know there’s a sense of urgency here.”

Russia’s blockade of Ukraine’s Black Sea ports continues to prevent shipments through that route, he added.

The Ukrainian government agreed to the largest prisoner swap since the invasion began on February 24, with 144 soldiers returning home, the nation’s military intelligence said on its Telegram channel.

Ninety-five of the returnees defended the Azovstal steel plant, the last redoubt of the long-embattled port of Mariupol before Russian forces took the city, 43 of which were members of the Azov battalion. Most of the exchanged prisoners are heavily wounded, the military said.

The Ukrainian leader, welcoming Indonesia’s president, said his attendance this year at the G20 summit hosted by Widodo would depend on the security situation as well as “the list of the summit’s attendees,” according to Interfax news service. Putin is also invited to attend.

Widodo also made a tour of Kyiv’s war-ravaged suburb of Irpin, expressing hope that the war can end “soon.”

Russia steps up crackdown as Ukraine conflict drags on

Russian legislators gave preliminary approval to a law dramatically escalating efforts to stamp out dissent as the invasion stretches into its fifth month.

The measure, approved by the lower house of Parliament in the last of three readings, allows authorities to declare as “foreign agents” anyone deemed to be under “foreign influence”. The draft law will head for Putin’s signature after a vote in the upper house.

Russia intervened with an air campaign in Syria in 2015 that succeeded in averting the overthrow of President Bashar al-Assad. Russia’s February 24 invasion took place days after Putin recognised the independence of DNR and LNR, a move rejected by Kyiv and most foreign governments.

Nato leaders formally invited Sweden and Finland to join the military alliance and agreed to sign their accession protocols, propelling the bids from the Nordic countries forward after weeks of stalling by Turkey.

The leaders welcomed a memorandum agreed by Turkey, Sweden and Finland late on Tuesday that led to Ankara lifting its block on the countries’ bids to join. Turkey had concerns the two Nordic nations didn’t do enough to tackle Kurdish groups it views as terrorists.

Johnson would be ‘amazed’ if Putin attends G20

UK Prime Minister Boris Johnson said he would be “absolutely amazed” if Putin attends the G20 summit in Indonesia in November, calling the Russian president a “pariah figure”.

Both Putin and Zelensky have been invited to the G20 gathering in Bali by Indonesia’s Widodo, although the Kremlin hasn’t confirmed if the Russian leader will go in person or take part online. Russia has been heavily sanctioned by some G20 states over its war in Ukraine.

US President Joe Biden and Turkish President Recep Tayyip Erdoğan will discuss the sale of dozens of new F-16 warplanes to modernise Turkey’s fleet on the sidelines of a Nato summit.

Erdogan is now seeking to capitalise on a relatively positive atmosphere in relations with Nato and the US after a period of frosty ties over his government’s purchase of advanced Russian air defences.

Lithuania’s defence chief said the Baltic nation has come under an unprecedented cyberattack from a group linked to the Kremlin this week after the government announced it would start blocking the transit of sanctioned goods to the Russian exclave of Kaliningrad.

Defence Minister Arvydas Anusauskas blamed the hacker group Killnet for a wave of distributed denial-of-service (DDoS) attacks against state institutions and businesses in the nation of 2.8 million.

The Kremlin, which has repeatedly denied that it conducts such campaigns, had no immediate response. Killnet has been accused of similar DDoS attacks on institutions in some Nato countries.

It wasn’t clear whether the sanctions would extend to MMC Norilsk Nickel, the world’s biggest producer of palladium and platinum, in which Potanin controls over 30%. Nickel spiked on the news.

Potanin was previously sanctioned by Canada and Australia. He is worth about $37.1-billion, according to the Bloomberg Billionaires Index.

Russia is considering spending extra revenues from oil and gas to buy the currencies of so-called friendly countries in order to stem a rally in the rouble that’s become a major economic problem.

The rouble has surged by 46% this year against the dollar as a flood of earnings from exports has hit a market where capital controls and import declines since Russia’s invasion of Ukraine have all but eliminated demand for foreign currency.

Finance Minister Anton Siluanov said the government is considering reviving a version of its pre-war fiscal rule to divert energy earnings into foreign exchange and indirectly weaken the rouble. The new approach would target currencies not hit by sanctions imposed by the US and its allies.

Nato leaders were on track to sign off on the so-called new force model, under which the alliance will pre-position more equipment, boost air defences and earmark forces to defend specific allies and maintain those forces at a certain level of readiness.

Biden said in Madrid on Wednesday that the US would establish a permanent headquarters in Poland for the Fifth Army Corps, maintain an additional rotational brigade of thousands of troops in Romania and bolster other deployments in the Baltic states.

The Pentagon will also send two more F-35 squadrons to the UK and bolster air-defence systems in Germany and Italy, in addition to 100,000 US troops already in Europe.

Zelensky dismissed Russian claims over a missile strike on a mall in Kremenchuk that left at least 20 people dead.

“Obviously there was an order to do this,” the Ukrainian president said in his nightly video statement. “They wanted to kill as many people as possible in a peaceful location.”

The Russian Defence Ministry said it carried out a strike on hangars storing Western arms and ammunition, which triggered the fire at the mall. The ministry didn’t provide evidence to back up its claims. DM