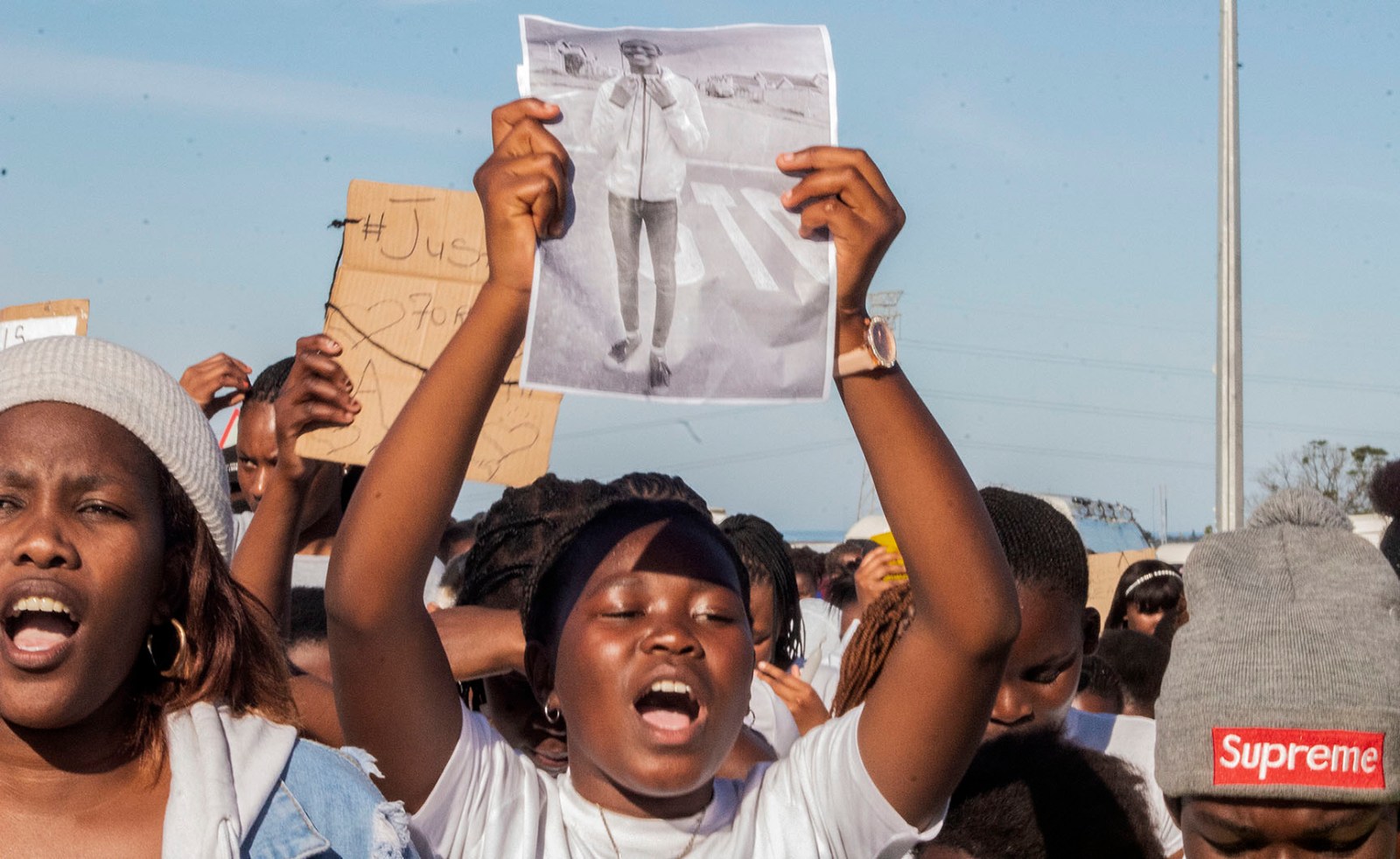 People among the crowd of young people who marched to Enyobeni tavern on 29 June 2022 to release the souls of the 21 who died, carried placards with photos of victims. (Photo: Hoseya Jubase)

Scores of young people who were friends with or related to the 21 teenagers who died in an East London tavern on Sunday, marched to the scene on Wednesday night.

Young people from Ziphunzane, Dice, Scenery Park and Mdantsane in East London marched to the Enyobeni tavern on Wednesday where 21 teenagers died during a party at the weekend to celebrate the end of exams.

During the emotional event, friends and family of the deceased cried, screamed and even fainted.

Speaking outside the tavern, the ANC Youth League chairperson in Buffalo City, Ondela Sokomani, said they did not trust the police of Scenery Park Police Station to properly investigate the tragedy.

“Police officers have failed their people by not responding to complaints submitted by residents in their police station. We are gathered here as a symbol of closure for those who are directly affected and those who knew or were friends with the deceased,” he said.

Sokomani said the tavern was never zoned for business and in terms of the municipal bylaws it had been operating illegally.

“Officials at the Eastern Cape Liquor Board just issued a licence without coming to this place to inspect the area.

“We cannot trust the Scenery Park police station with this case because they failed to do their job,” said Sokomani.

Eastern Cape Premier Lubabalo Oscar Mabuyane’s spokesperson, Khuselwa Rantjie, said that postmortems had been performed on the 21 dead and samples had been sent to a laboratory in the Western Cape for further analysis.

“The report will be shared with the affected families as soon as investigations have been concluded. The South African Police Service (SAPS) remains on the scene and continues to comb the scene for further clues in relation to the tragic incident,” she said.

Rantjie said a mass funeral service would be held on Wednesday, 6 July.

“Thereafter, families will be assisted with transportation of the remains to be interred at burial sites of their choice. Government has expressed appreciation for support that has been received from all sectors of society in preparation for the funeral. Amongst those is Avbob. The funeral parlour has pledged burial costs support for each family,” said Rantjie.

She said the Buffalo City Metropolitan Municipality had waived the grave fees for the burials.

Rantjie said the provincial government, with its partners, would continue to provide psychosocial support to the bereaved families and the broader community.

“This will include community debriefing sessions to assist everyone to cope with the impact of Sunday’s tragic event,” she said.

On Wednesday afternoon, officials from the Buffalo City metro delivered food parcels and vouchers to the families of the dead.

Deputy mayor Princess Faku said the municipality had to take a stand in terms of law enforcement to check that liquor stores did not sell to people under the age of 18.

“We think we need to have a programme with the Department of Education to visit these young people in schools and we need to look at our bylaws as a municipality because we discovered that the owner of the tavern was not even licensed,” she said.

Faku said they would ensure that Scenery Park was not home to illegal taverns.

Eastern Cape Liquor Board spokesperson Mgwebi Msiya said the tavern received its liquor licence in 2012 and at the time it had followed all the rules.

“In order for one to have a licence they need to follow all the regulations, like having community meetings. We don’t issue a liquor licence if the law is not followed,” he said.

However, Msiya also said there appeared to be some issues.

“The owner of the tavern did not tell us and the municipality that they have extended the place,” he said.

He said they had closed the tavern on Monday and it would remain closed at least until the investigation was complete.

Eastern Cape police spokesperson Brigadier Tembinkosi Kinana said the SAPS management in the province had expressed concerns about rumours and media reports speculating about the cause of the tragedy.

“The SAPS forensic investigators are still continuing with the investigation into the deaths of 21 children at Enyobeni tavern in Scenery Park. After conducting the investigation in the building structure… and… autopsies…  specimens extracted were then taken to the forensic laboratory for toxicology examination,” he said.

Kinana said that until the forensic investigation was concluded, any informal and unofficial information about the cause of the tragedy which was not released by the SAPS must be regarded as false and misleading.

The provincial commissioner, Lieutenant-General Nomthetheleli Mene, cautioned against the spreading of fabricated stories.

“When an official report has been made available by the experts, the family and members of the public will be informed by the relevant authority. We urge people to refrain from making risky assumptions which do not assist our investigations.”

The SAPS has appealed to anyone with information that can assist the ongoing investigation to contact Brigadier Mxolisi Mqotyana at 082 5292 465 or call Crime Stop on 086 00 10 111. DM/MC