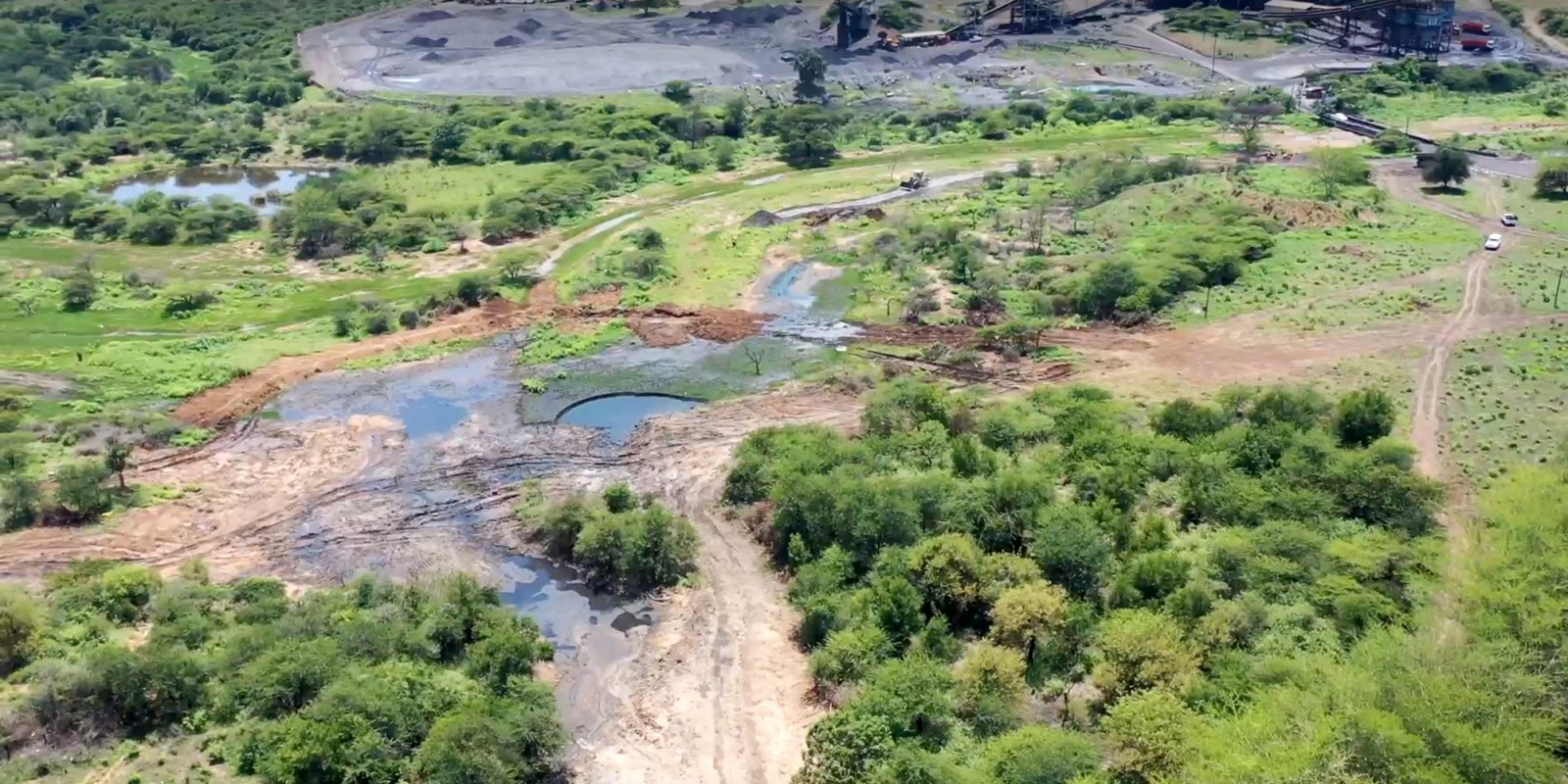 What is happening with coal mining in northern KwaZulu-Natal in a Freshwater Ecosystem Priority Area is a war on water and our climate resilience.

“The southern white rhino has been to the brink of extinction and back, but even as it continues to be under threat from poachers, its survival is largely thanks to the conservation work of one park. Today, most of these rhinos can trace their ancestry back to the Hluhluwe-iMfolozi Park (HiP) in KwaZulu-Natal, South Africa,” CNN reported in June 2020.

It was Ian Player and his mentor, Magqubu Ntombela, a game ranger and descendant of the great Zulu chiefs, Shaka and Dingaan, who set up wilderness trails in the iMfolozi and sparked a global wilderness consciousness movement.

As Player wrote, “everyone who comes to the wilderness is changed by it, no one who sleeps on the ground underneath the blaze of southern stars and hears the roar of the lion, the coughing of the leopard, the howl of the hyena, the scream of the elephant and smells the smoke of wild wood burning is ever the same again.”

And in what must be recognised as one of the greatest conservation achievements of all time, Ian Player’s “Operation Rhino” achieved a 1,000% growth in the white rhino population in the 1960s saving the 40 Southern White Rhino left in the 1940s from extinction. Operation Rhino took place in the Hluhluwe-iMfolozi Park which is also the oldest proclaimed game reserve in Africa, having been established in 1895.

The Park sits on a coal belt and has, for over two decades, been subjected to the difficulties of having two coal mines as its neighbours on both its north and east boundary. Coal mining is polluting, noisy and not a good neighbour for the communities they inflict their pollution on nor the wild areas where animals and people live peacefully and, (gasp) even thrive. It seems utterly bizarre that coal mining would be given a place adjacent to ancient wild heritage and centuries-old Zulu culture — but that’s exactly what happened.

One of the main causes of the climate crisis is the fossil fuel industry which, particularly in South Africa, is still being pursued in spite of the damage it causes to the environment and at grassroots level in the communities in which the mining takes place.

Coal mining repeatedly forecloses on alternative, more sustainable land uses; undermines biodiversity conservation efforts; impacts heavily on water resources; strips people of their land rights; destroys subsistence-based livelihoods and cultural heritage; causes division in the community; and erodes people’s right to an environment that is not harmful to their health or wellbeing — a right afforded to them by Section 24 of the Constitution, 1996.

Freshwater ecosystems, including rivers and wetlands, are particularly vulnerable to coal mining and related activities that can often result in irreversible damage or longer-term gradual, cumulative impacts. Coal mining will result in significantly reduced water quality due to acidification and ferric sulphate (which kills fish and other aquatic fauna), hydrocarbons, coal dust and nitrate deposition, together with high turbidity.

South Africa has 22 water source areas which are the source of our five major river systems and which support approximately 60% of South Africa’s population. The Mfolozi Headwaters is one of these areas with the Black Mfolozi, Pongola and Lenjane Rivers being the main rivers which flow from Mfolozi Headwaters. It feeds a number of free-flowing rivers including the Mkuze, Nsonge, Ndonweni, Ngogo, Mfule and Nyalazi.

The Mnyaba and Nyalazi river systems are classified as nationally important Freshwater Ecosystem Priority Areas (Fepas), the Mnyaba river has a “medium-high” Ecological Importance and Sensitivity (EIS) rating and Nyalazi River has been rated medium in terms of EIS. The White Mfolozi is identified as being a strategic spatial priority for conserving South Africa’s freshwater ecosystems and supporting sustainable water resources.

The St Lucia Estuary is one of the main components of the iSimangaliso Wetland Park, a Unesco World Heritage Site. The estuary is by nature dynamic. It is driven, at any given point in time, by five rivers and sea water inflows through an estuarine mouth. Of the rivers, the Mfolozi is the largest. The wetland park supports a range of plant, bird, fish, and animal species.

All of these mines and prospecting applications fall within the Mfolozi Catchment or are situated along the Mfolozi River. The Black Mfolozi flows through ZACs mining right area and into the Hluhluwe-iMfolozi Park. A drainage line flows through Zululand Anthracite Colliery’s (ZAC) Nqolothi coal siding (which stockpiles coal for transport) and into the Nhlungwane stream, which is a tributary of the Mfolozi River. ZAC abstracts water from the Black Mfolozi River in an amount we are unable to ascertain but the annual water requirement for its proposed expansion is 190,453.69m3 per annum.

According to South Africa’s National Climate Change Adaptation Strategy, 2019 (approved in August 2020), access to fresh water, which is already a major challenge in these areas, is predicted to become a much bigger problem as the climate crisis intensifies, with potentially devastating effects. South Africa is to experience drier conditions overall with higher water demand and deteriorating water quality in river systems, water storage reservoirs and groundwater. Our current water usage already exceeds reliable yield.

In most climate-crisis scenarios projected for South Africa, future water supply availability will worsen considerably by 2050. Decreased availability of water in rivers is a result of the net effect of increased temperatures and increased evaporation, combined with shifts in the timing and amount of rainfall; changes in the timing of high and low flows due to changes in rainfall patterns; and a higher incidence of floods as heavy rainfall events increase.

According to the Adaptation Strategy, in the event of future water shortages, meeting the reserve (i.e. water quality and quantity needed to satisfy basic human needs and protect aquatic ecosystems to ensure ecologically sustainable development) must take priority over water uses in the mining sector. If basic human and environmental needs are not given precedence, as required, this could have significant impacts for environmental and human health — resulting in breaches of fundamental constitutional rights to a healthy environment and the right of access to sufficient food and water.

Essentially, what is happening in northern KwaZulu-Natal, in a Freshwater Ecosystem Priority Area, is a war on water and our climate resilience.

To have any more mining and prospecting rights issued on top of all the current mining is evidence that the Department of Mineral Resources and Energy (DMRE) has absolutely no intention of protecting the natural areas of the country or meeting our climate commitments. What DMRE is doing is showing complete disregard for any other department in government and for the people of South Africa.

Unless they are opposed by us, the people.

Let’s be honest. No one wants to drive through the wasteland of filth that is an open-cast coal mine before entering a game reserve. No one wants to spend time in a wilderness area when the light and noise pollution from a mine ruins the experience. No one and no animal wants to drink water from a river that is polluted by mine waste. No person would choose to live next to a mine and be exposed to dust, noise and pollution every day.

While the world moves away from coal, South Africa welcomes more and more. What DMRE is doing by issuing mining licences in this area is nothing short of ecocide. DM/OBP