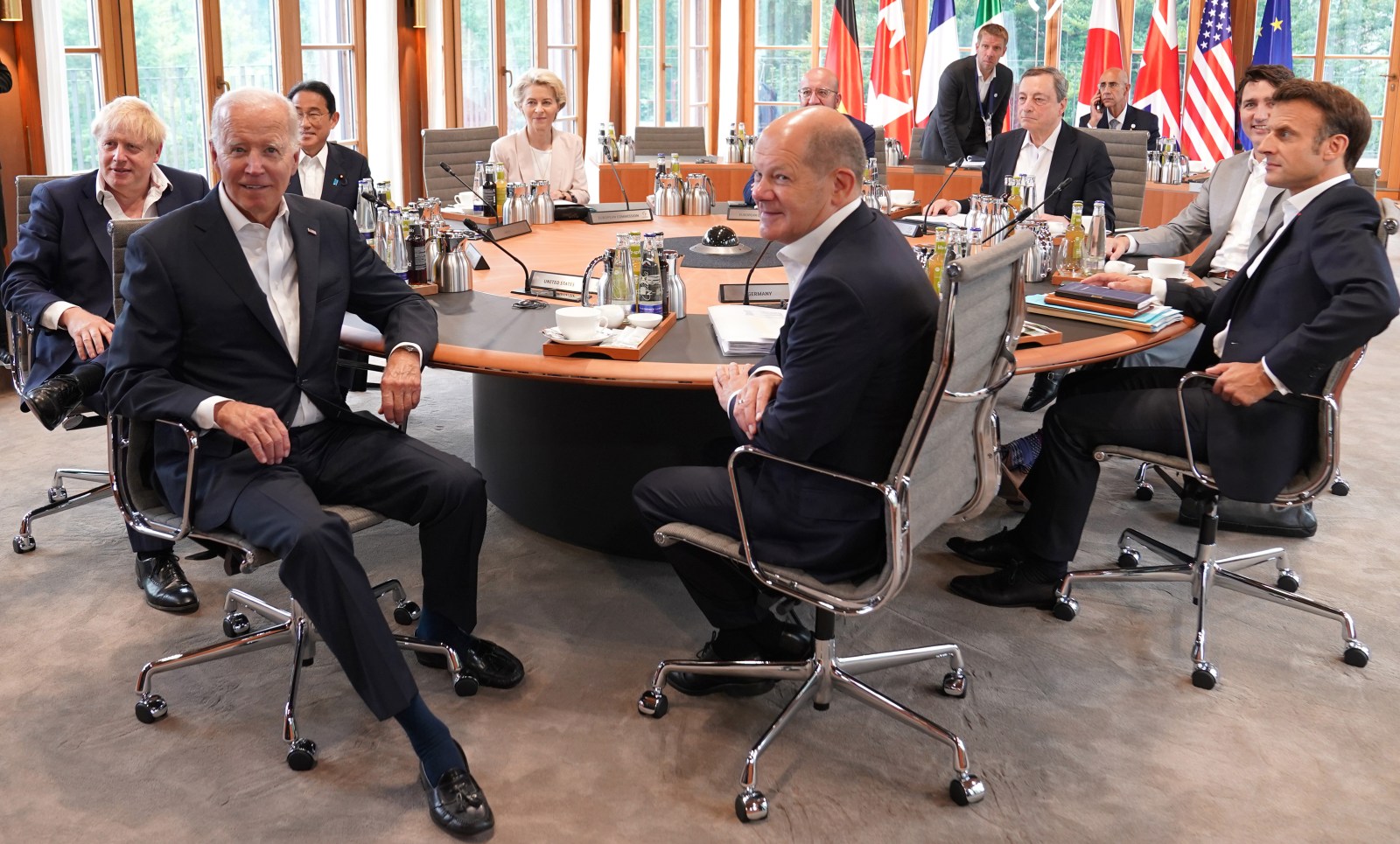 Group of Seven nations moved forward with an ambition to limit Russian President Vladimir Putin’s energy revenue by curbing oil and gas prices, a day after a Russian missile strike on a shopping centre in central Ukraine killed at least 20 people.

The missile attack in the city of Kremenchuk, about 300km southeast of Kyiv, was sparked by a fire from a strike on an arms and ammunition depot nearby, Russia’s Defence Ministry said — a claim swiftly refuted by Ukrainian authorities. More than 40 people were still unaccounted for. G7 leaders branded the attack a war crime.

Ukrainian President Volodymyr Zelensky told G7 leaders he wants the war to be over by the end of the year, according to officials familiar with the remarks. Heads of state and government were en route to Madrid for a Nato summit, with plans to boost the size of its high-readiness force to 300,000 to bolster defences against Russian aggression.

Russian forces are pressing ahead with their goal of occupying all of the Donetsk and Luhansk regions, Ukrainian military spokesperson Oleksandr Motuzyanyk said during a video briefing. Kyiv-led forces are withdrawing from Sievierodonetsk, as the Russian military moved in on neighbouring Lysychansk from the south, closing in on the last major redoubt in the Luhansk region that Kyiv still controls. While Lysychansk remained the main hotspot of military action, Russian troops shelled Ukrainian positions and civilian areas elsewhere along the front line, including with air-to-land missiles. Kharkiv, Ukraine’s second-largest city, was also being shelled, its mayor said.

Six rockets were launched by Russia on central Ukraine’s Dnipropetrovsk region, with several hitting railway infrastructure, an industrial enterprise and a car service station in the region’s major city of Dnipro, Valentyn Reznichenko, the head of the regional government, said on his Telegram account.

Fire erupted after a missile strike on the service station, where employees still remain under rubble, and it was being extinguished, he said. Explosions were also heard on Tuesday in another big city, the southern seaport of Mykolayiv.

Prime Minister Boris Johnson said that Britain and its allies have to stand by their principles in supporting Ukraine and demonstrate to China that countries won’t be allowed to expand their territory by military force.

On a flight to Madrid for a summit of Nato leaders, Johnson was asked whether failure to support Ukraine might encourage China to consider invading Taiwan.

“It’s very important that countries around the world should not be able to read across from events in Europe and draw the conclusion that the world will simply stand idly by if boundaries are changed by force,” Johnson said. “That’s one of the most important lessons that we pick up from Ukraine.”

The US Treasury Department announced its previously planned ban on the import of Russian gold and issued full-blocking sanctions on Russian defence company Rostec. The action also targeted several other military contractors and individuals tied to the industry.

“Targeting Russia’s defence industry will degrade Putin’s capabilities and further impede his war against Ukraine, which has already been plagued by poor morale, broken supply chains, and logistical failures,” Treasury Secretary Janet Yellen said in a statement timed to coincide with the end of the G7 summit.

The Pentagon’s inspector-general opened an inquiry into US intelligence-sharing with North Atlantic Treaty Organization allies and Ukraine on Russia’s invasion.

The “objective of this evaluation is to determine the extent to which the DoD [Department of Defense] developed, planned, and executed cross-domain intelligence sharing with European partners in support of Ukraine,” Maurice Foster, acting assistant inspector general for evaluations, said in a statement.

Officials at the Department of Defense and other agencies have been questioned by legislators and analysts about the extent and details of US tactical and strategic intelligence-sharing.

At least 20 people killed in missile strike at shopping centre

The number of people killed in the shopping centre strike in Kremenchuk has climbed to at least 20, and more than 40 are missing, Kyrylo Tymoshenko, the deputy head of the presidential office, said on Telegram. Another 59 were injured.

Interior Minister Denys Monastyrsky said in televised remarks that identifying remains was complicated by serious burns, adding that many appeared to have ignored an air-raid alarm and remained in the building. Zelensky said in a video address that about 1,000 were at the site, and called the Russian state the “largest terrorist organisation in the world”.

Close to 3,000 civilians have been killed in Russian attacks since the invasion began on February 24, the State Emergency Service of Ukraine said on Telegram.

European gas demand the highest in a decade in 2021, BP says

Europe’s natural gas demand soared to the highest in a decade last year, and the war in Ukraine will only tighten the market further, BP said in its annual Statistical Review.

Energy use roared back in 2021 as nations emerged from months of pandemic restrictions. But the rebound coincided with capped gas flows from Russia and a squeeze on liquefied natural gas. The European market ended the year with volatility at an all-time high, and the wild price swings have continued in 2022 with the invasion of Ukraine stoking fears over supply.

G7 leaders agreed that they want ministers to discuss urgently and evaluate how the prices of Russian oil and gas can be curbed to limit revenues flowing to the government in Moscow.

“We reaffirm our commitment to phase out our dependency on Russian energy,” the leaders said in a statement after the three-day summit meeting in the Bavarian Alps. “In addition, we will explore further measures to prevent Russia from profiting from its war of aggression.”

Asked whether Germany and other G7 nations will attend a G20 summit in November, which Putin may also take part in, German Chancellor Olaf Scholz said there was “broad agreement” among leaders in Bavaria that they “don’t want to drive the G20 apart.”

“As things stand, the decision of the countries gathered here was that they will attend,” Scholz said at a news conference. Both Putin and Zelensky have accepted invitations to the meeting in Bali from G20 presidency Indonesia, though it’s not clear if they will attend in person. Putin has declined to meet with Zelensky, who has said it’s the only way to end the war.

The British premier appeared to rule out boosting the UK’s defence budget after his defence secretary, Ben Wallace, called for a 20% increase in spending over five years — and General Patrick Sanders, the UK army chief, said Britain and its Nato allies must be “unequivocally prepared to fight” if Russia attacks any of their territory.

Speaking as he was set to depart Germany after the G7 meeting, Johnson told reporters the UK has “more than met our pledge” to spend 2% of national income on defence and last year was the third-biggest spender on defence in the world. “I don’t think it will come to that,” Johnson said when asked if Britain will be forced to fight Russia directly.

The Russian Defence Ministry said it carried out a “precision-guided attack” on hangars storing arms and ammunition that Ukraine had received from the US and European countries. It said that the explosion sparked a fire in the nearby shopping mall, which it described as “non-functioning.” The ministry didn’t provide evidence to back up its claims, and Ukraine was swift to refute them.

Speaking on national television, Ukraine’s interior minister said there is no military facility within a 5km radius of the shopping mall. He also said that more than 100 missiles were fired at Ukraine in the past three days.

The Ukraine invasion brought democratic nations together, “whether they be members of Nato, or non-members such as Australia”, Prime Minister Anthony Albanese said in an interview with the Australian Financial Review, conducted en route to Spain for the Nato summit.

Asked what message the Chinese government should take from Russia’s invasion, particularly for its ambitions toward Taiwan, Albanese said the war “had shown attempts to impose change by force on a sovereign country meet resistance”.

Nato is set to label China a “systemic challenge” when it outlines its new policy guidelines this week, while also highlighting Beijing’s deepening partnership with Russia, according to people familiar with the matter.

The “Strategic Concept” document will outline the alliance’s priorities for the coming decade and is due to be signed off by Nato leaders at a summit in Madrid this week. The previous version, published in 2010, made no mention of China and referred to Russia as a partner, wording that is set to be scrapped.