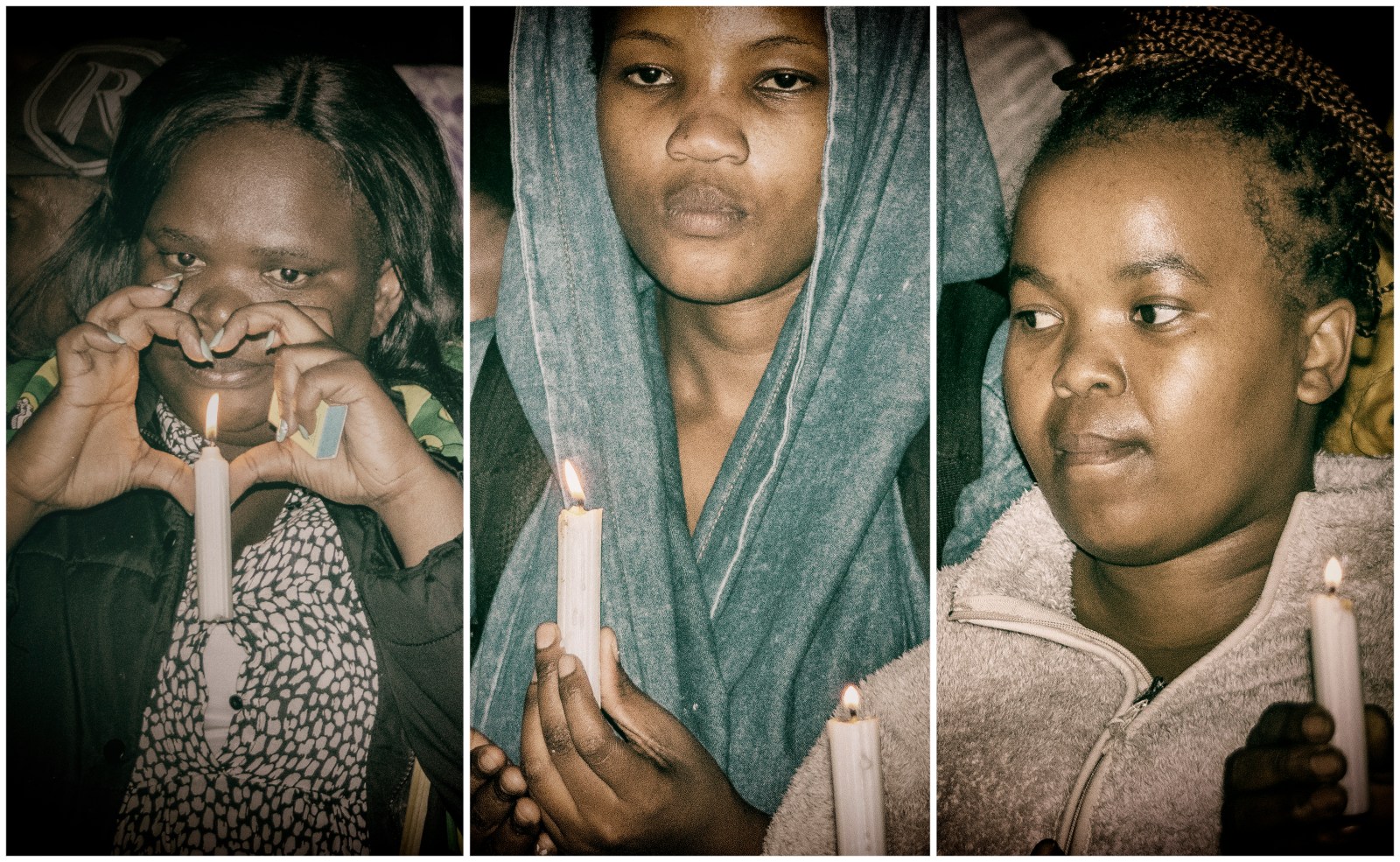 The Eastern Cape Liquor Board opened a case on Tuesday against the owner of East London’s Enyobeni tavern. Residents held a night vigil 50m from the nightspot where 21 young people died on Sunday morning.

The Eastern Cape Liquor Board has opened a case of selling liquor to the underaged against the owner of Enyobeni tavern in East London, where 21 young people died on Sunday morning. ECLB spokesperson Mgwebi Msiya confirmed a charge had been laid.

A police Nyala and several police officers have been on guard at the tavern since the tragedy to prevent any interference with the scene. Forensic investigators were also present on Tuesday.

On Tuesday afternoon, the South African National Civic Organisation (Sanco) in the Buffalo City region and the ANC Scenery Park branch called a meeting to address residents at a community hall. After short talks, a group of residents marched to a venue about 50m from the tavern for a night vigil, where they lit candles and prayed for the families of those who had died and had been sickened in the tavern on Sunday.

At the meeting, the Sanco leadership called on the government to declare Scenery Park a disaster area after the deaths. Buffalo City regional treasurer Nomthunzi Mbiko said, “If there were youth institutions, programmes available for young people, this incident [would] have never happened.”

Read in Daily Maverick: ‘Kuzofiwa’ — a party invitation that foreshadowed deaths of 21 at Eastern Cape nightspot

“Some of the reasons these children go to taverns is because they do not have anything to do, there is no sports field for these kids, the hall we have has no electricity, we do not even have a library for these kids,” she said.

Mbiko said this was not the first time there had been complaints about the tavern.

“We visited the Scenery Park police station many times complaining about the tavern and the ECLB. The police and ECLB must also come forward to explain to us how [they gave] the owner of the tavern the licence and who signed the documents,” said Mbiko.

Residents said ECLB and the Scenery Park police had failed them. Bandile Gongqa claimed this was not the first incident at Enyobeni tavern.

“There are other incidents prior to this one and as residents of this area we have reported this to the police, but no actions are taken,” he said.

“The board conveys its heartfelt condolences to families that have tragically lost their loved ones. ECLB has also learnt with shock that some of the deceased are school-going and under the age of 18. The board condemns this repugnant incident with the strongest possible terms,” she said.

Makala said the board had always been forthright in its condemnation and fight against the sale of alcohol to people under 18.

“We have also consistently taken every necessary step against any liquor outlet that is found to have sold alcohol to the underaged,” said Makala.

She said necessary steps were being taken to deal with the liquor outlet including the immediate revocation of its liquor licence. Criminal charges had been laid against the licence holder for “the blatant contravention of the Eastern Cape Liquor Act that clearly stipulates that no alcohol shall be sold to persons under the age of 18.”

“We continue to urge communities to report to the ECLB or SAPS any suspicious practices by the liquor outlets within their proximity. To this effect, we have established a toll-free number (080 000 0420) and a WhatsApp number (076 403 6223) to enable communities to report cases of non-compliance including the sale of alcohol to underage people.”

Makala said the community had a significant role to play in monitoring and reporting liquor outlets that flouted trading conditions.

Addressing the meeting, ANC Scenery Park secretary Zithulele Sam said a committee of 12 people had been formed to help the community and families prepare for the funerals.

“Scenery Park is facing a huge drug and alcohol abuse problem amongst young people of the area. Let the justice system take its course and not interfere with the law,” he said.

He said there would be no memorial service, but the government would arrange a mass funeral in Scenery Park.

Jobela said young people had not taken part in the meeting and that they needed to be included in all talks involving Scenery Park youth.

Sanco and the ANC agreed to involve young people in the planning of the funeral. DM/MC