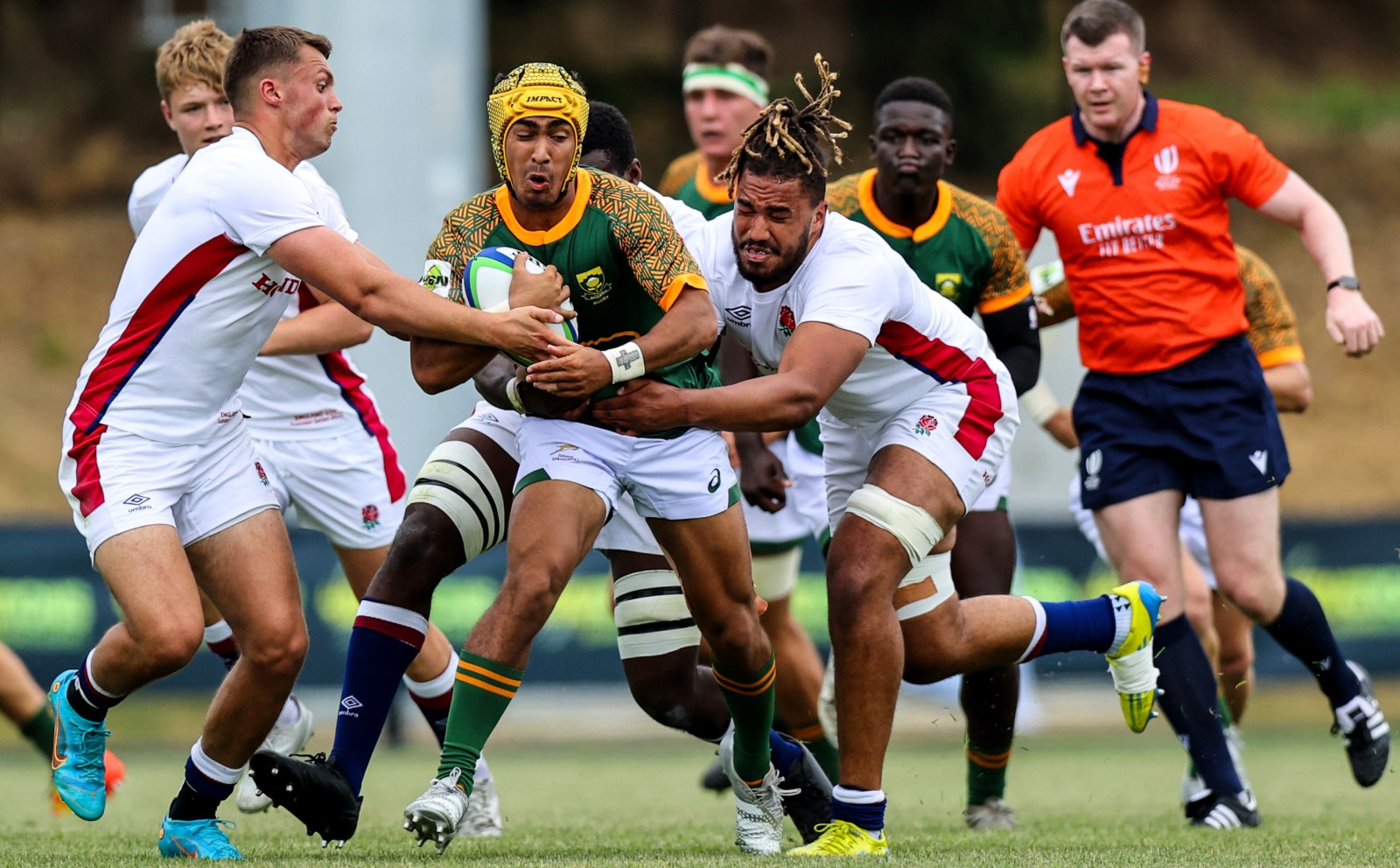 Ethan James is tackled by Tom Carr-Smith and Chandler Cunningham-South on 24 June 2022 during the Under-20 Six Nations Summer Series Round 1 Pool A, Payanini Center, Verona, Italy. (Photo: INPHO / Ben Brady)

The Junior Springboks meet European champions Ireland in the Six Nations Under-20 Summer Series on Wednesday with a new-look team.

Junior Boks assistant coach Chean Roux has urged a much-changed pack to raise the intensity against Six Nations Under-20 champions Ireland, who they play in Verona, Italy, on Wednesday.

South Africa have made six changes in total, all in the forwards, for their second fixture in the series, and Roux stressed the importance of squad rotation, given the tight turnaround between matches.

Despite an immensely physical battle in their 30-22 victory over England on Friday, Roux warned his side of the threat a wounded Ireland will pose, who are desperate to avoid a second defeat after their opening-day misery against France, who beat them 42-21.

“I think we should step up our intensity,” Roux said.

“I thought we did well with England, for starters, but now we’re used to where we live and what the field looks like and I think everyone has found their rhythm.

“The Irish will be hurting after that loss to France and we have to make sure we are physically and mentally prepared and up for the challenge.”

The new front row should be familiar with one another, with all three playing their club rugby for the Bulls. Sivuyise Mabece and Corne Lavanga line up on either side of hooker Tiaan Lange.

Further back, there are first starts for Corne Rahl, Paul de Villiers and Louw Nel, while the backline remains completely unchanged with flyhalf Sacha Mngomezulu, who registered three assists in round one, skippering the side once again.

Nhleko has kept intact the starting backline that did duty in the win over England, but he has freshened up the pack for the expected fiery battle against Ireland, who won the competition earlier this year.

Reinhardt Ludwig (lock) and Cameron Hanekom (lock) are the only two players set to get a second start among the forwards, with Nhleko making six changes to the forwards combination that will run out against Ireland.

Corne Lavanga and Sivu Mabece (props) and Tiaan Lange (hooker) will pack down in the front row. Ludwig’s new lock partner is Corne Rahl, while Hanekom, who had a strong outing against the English, will be flanked by Paul de Villiers and Louw Nel in the back row.

The new-look replacements bench has only utility backs Compion von Ludwig and Imad Khan from the 11 substitutes used in the opening fixture.

“They’re a very good side, the champions of the Six Nations,” said Roux, speaking about Wednesday’s opponents.

“So if we don’t have the intensity it’ll be a long day for us. We’ve had a good workout and, hopefully, things will fall into place for us.

“They are a proud team who showed what they’re capable of during their recent Six Nations campaign, so we have no doubt they will bring it against us.”

Captain Sacha Mngomezulu called for an overall improvement in their game and a strong mentality if they want to topple Ireland.

While the team is happy with the winning start they made against England, they are less satisfied with a few aspects of their play.

Mngomezulu said they are far more settled now that they have one tournament game behind them.

“Now we all know what it’s like playing at this level and how small the margins are,” he said.

“We didn’t play too well [against England] but we won by eight points, and we are happy to take that.

“We know what’s required of us to do well against Ireland and we are training as if we’ve lost [our first game]. That hunger and desire [to eliminate mistakes] are very evident in our training.”

Mngomezulu expects the wounded Irish to come out firing on all cylinders on Wednesday night.

“They must be disappointed with their result against France because they won all their games in the [previous] Six Nations, so they would want to rectify matters against us,” said the Junior Boks captain.

“Therefore, we are putting in all the preparations to make sure we are physically and mentally ready to handle them.”

A win for South Africa would set them up nicely for the top spot in Pool A, and recent history favours them, with three wins in their last four meetings against Ireland in this age group. DM