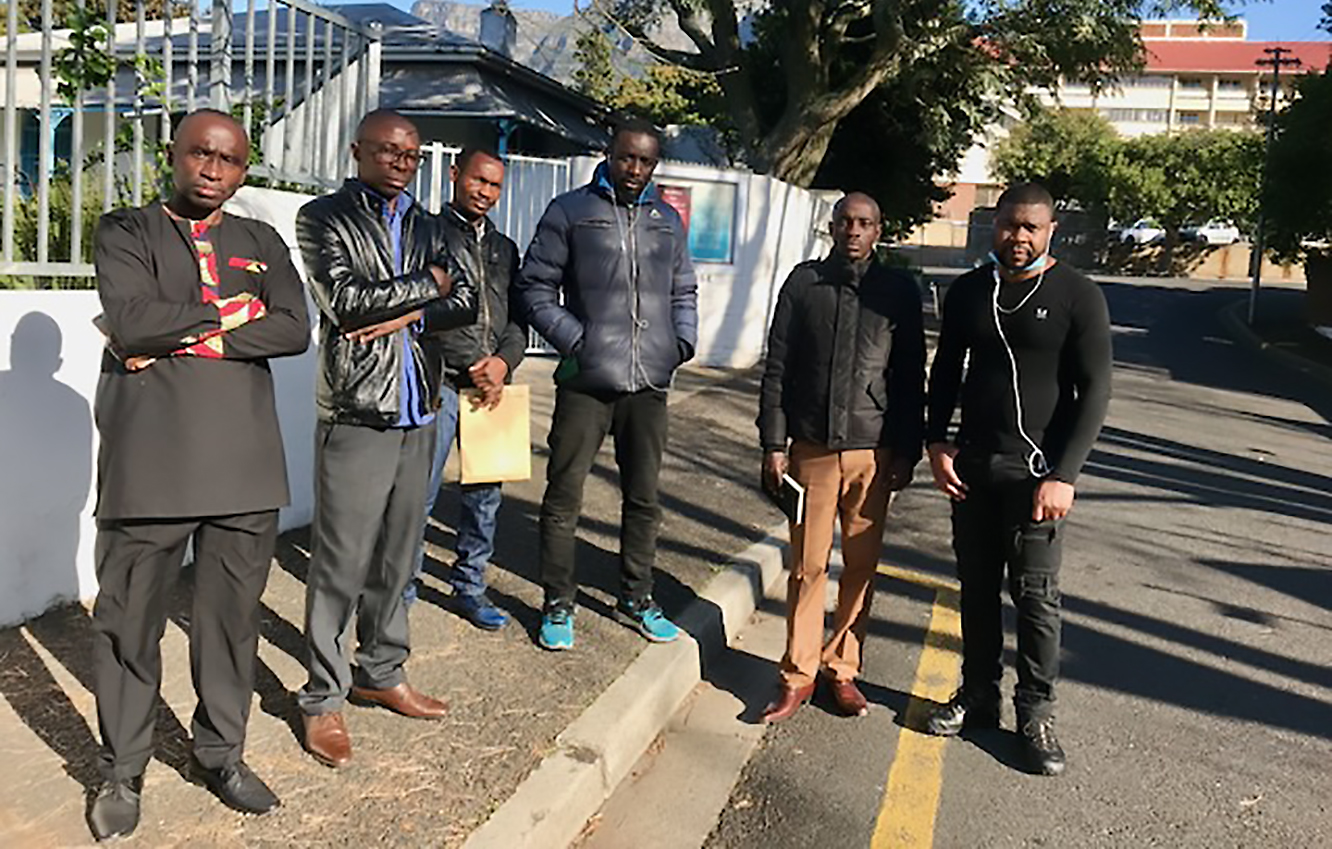 Former Metro City Protection Services CC security guards succeeded in their court action against the company but have not been paid. (Photo: Tariro Washinyira)

Africa Revival Foundation is a not-for-profit refugee rights and legal assistance organisation. It is inundated with requests for legal help from immigrant security guards with labour issues.

Among the complaints are unfair dismissals, allegations of employers paying off labour officials and conniving with immigration officers, and police intimidating refugees.

One case involved a company called Metro City Protection Services. Despite a Labour Court order, it has failed to pay over R211,000 in wages, notice, leave and severance pay after it retrenched 13 employees in June 2019. The company was also ordered to pay each employee R31,500 in compensation for its unprocedural dismissal.

According to the judgment, the retrenchment was “procedurally unfair”. The company was ordered to pay six-months remuneration as compensation for “gross disregard for the fair procedural requirements of a dismissal for operational reasons”. The former employees were meant to be paid by mid-March, 15 working days from the date of the judgment, 21 February.

Fidele Sadric Nzayikorera, a Burundian asylum seeker and former employee of Metro City Protection, said, “We have not worked since 2019. If you visit my house you can see for yourself how I am struggling to feed my wife and two children … I pay R3,000 rent in Delft and R30 daily for school transport.”

He is getting by on piecemeal work.

“We worked every day from 6am to 6pm, sometimes 24 hours if the other security guard failed to turn up. The employer underpaid us … Refugees [working for the company] had no permanent site; we travelled all over and worked in Stellenbosch, Grabouw and Bellville.”

GroundUp contacted Metro City Protection Services via email on 13 June but the company did not respond. We have been trying to call the company, including on Monday on the number listed on their website and Facebook we get a “number is unreachable” message.

Serge Ndayegamiye and Reverien Ngendakumana, who run the Africa Revival Foundation, told GroundUp they have not heard back from Metro City Protection Services after they heard it was going into liquidation. They did send a letter to the company in February telling it that “should this be done to prejudice our clients, we will seek to hold the sole member, Ms Lyndall Louise Daniels jointly and severally liable with the company for this debt and proceed accordingly”.

We have been unable to reach Daniels.

In February, we reported that another group of immigrant security guards were taking a Cape Town-based security company, Ultimate Protection and Control, to court to compel it to pay money they say is owed to them after they were unfairly dismissed. They still have not been paid what they are owed.

Attempts to get comment from Ultimate Protection and Control in February were fruitless. We again attempted to get comment for the current story. We were directed to manager Willem Ellis.

“I have only been here for a few days and have no idea of that situation but I would like to get the background of this, if you can forward me the emails … then I can look into this for you,” he said.

Further comment from the company will be added if received.

Africa Revival Foundation was established by Ndayegamiye and Ngendakumana, together with lawyer Charl May, to help refugees with such unfair dismissal cases.

Ndayegamiye and Ngendakumana are both from Burundi and both have worked as security guards.

Ngendakumana was unfairly dismissed in 2013 and got compensation through the Labour Court with the help of Ndayegamiye and May.

Ndayegamiye was a refugee for five years in Zambia before he moved to South Africa in 2001. He worked in the security industry for five years and left after he achieved a diploma in project management at the University of the Western Cape.

He said, “Companies who have been ordered by the court to pay, change their names, relocate or get liquidated. Even if you get an award, getting the money from the company is difficult. We have five cases with awards from CCMA and the Labour Court that we are struggling with.”

“I worked as a security guard in schools in Philippi and Khayelitsha,” Ndayegamiye said. “The employer struggled to get people to work there because it was a night job in unsafe areas. I had to patrol the whole night and there was a machine I had to go and clock in with every 30 minutes.”

“At month-end, the employer would not give me a full salary and refused to pay a few times. I needed to buy groceries, pay rent and save transport money for work, but he didn’t care. It was a job many people shunned, but when you have no other way out, you are forced to do any kind of work to survive.”

Spokesperson for the Private Security Industry Regulatory Authority (PSiRA) Sharon Matiapoto did not address the issue of exploitation of immigrant workers, but said only permanent residents and South African citizens can be employed in security. She said PSiRA has received allegations about security businesses employing undocumented people.

She said in the 2020/21 reporting year, PSiRA had worked closely with the South African Police Services (SAPS) on 47 operations that led to 875 arrests, as well as 1,377 criminal cases registered against such non-compliant security service providers.

GroundUp tried for ten days, without success, to get comments from various spokespeople at the Department of Employment and Labour. DM