Pieter-Steph’s comeback will have to wait at least on... 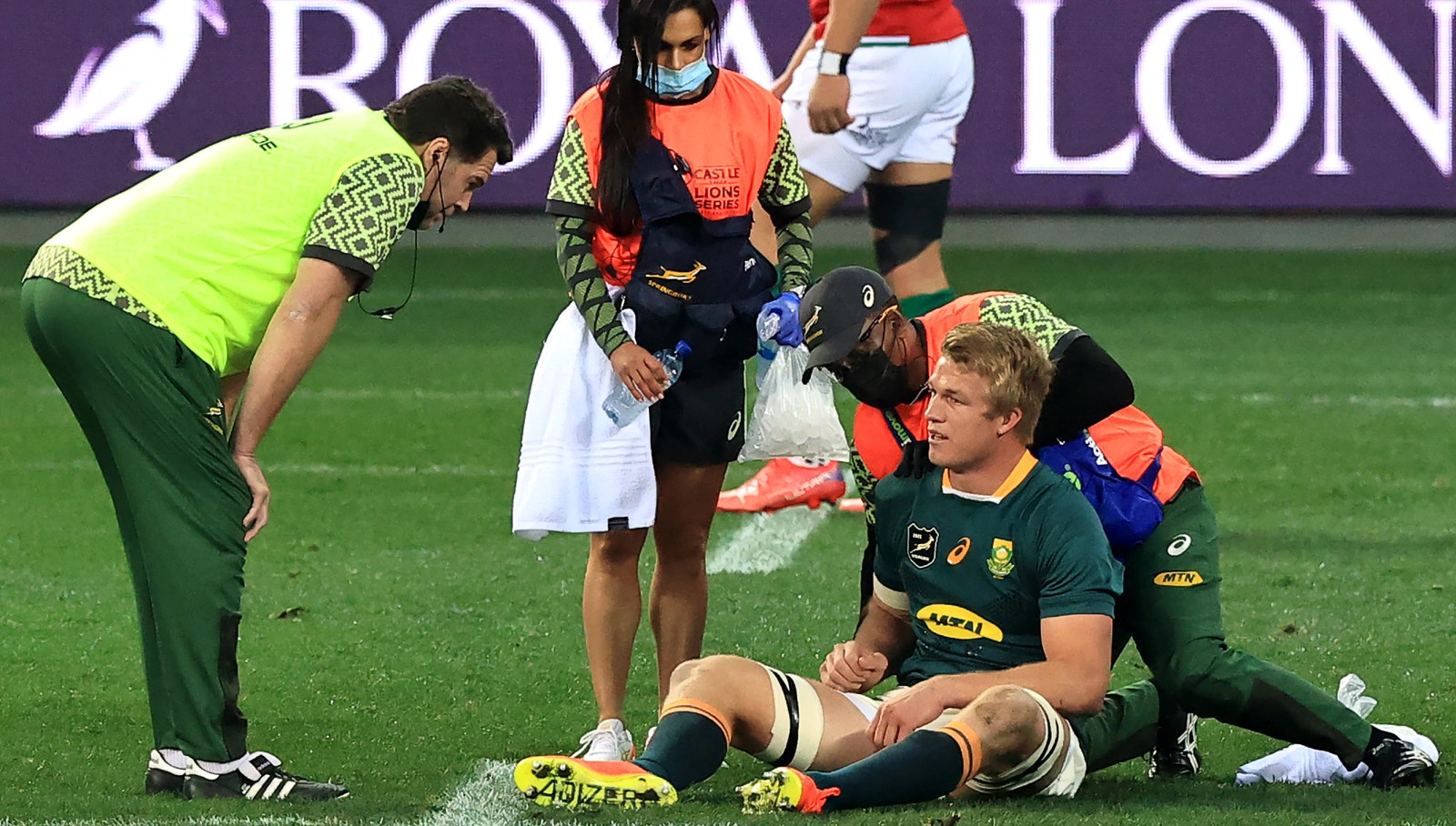 Pieter-Steph du Toit of South Africa receives attention to an injury as he talks to Rassie Erasmus, the South Africa director of rugby during the second Test match between the Springboks and the British & Irish Lions at Cape Town Stadium on 31 Jully 2021. (Photo by David Rogers / Getty Images)

A slightly slower than hoped-for return from shoulder surgery means the Springbok flank is not eligible to play against Wales this weekend.

There is no telling how great his already great rugby career would be if Pieter-Steph du Toit had enjoyed less bad luck with injuries. After a shoulder injury ruled him out of 10 of the Boks’ 13 Tests in 2021, Du Toit will miss Saturday’s first Test of 2022 against Wales in Pretoria.

Not for the first time in his storied journey to the pinnacle of the sport, injury has held him back. Du Toit will miss the opportunity to earn his 59th Test cap at Loftus. A slightly slower than hoped return from shoulder surgery means he is not eligible this weekend.

Springbok coach Jacques Nienaber won’t consider the bruising flank for the match because Du Toit won’t be able to train until Thursday at the earliest.

The 29-year-old made his Test debut nine years ago and should have at least 75 caps by now, even allowing for some injuries. But Du Toit’s catalogue of blows reads like the script for a horror movie.

He has had left- and right-ankle surgery, two knee operations, a cracked sternum and, perhaps most serious of all, acute compartment syndrome, which nearly cost him his left leg. Twice. That’s not even listing the usual rugby ailments of dislocated fingers, muscle tears and general battering.

That last injury, where amputation of the limb was a serious consideration during a critical few hours following what seemed a fairly innocuous blow to the leg during a Super Rugby match in February 2020, was enough to make his physiotherapist wife blanch.

Only Du Toit’s previous experience of the same injury, sustained when he was a high school player, and the quick thinking of the Stormers’ doctor, Jason Suter, averted catastrophe at the time.

Acute compartment syndrome is a potentially fatal condition that blocks blood supply from one area of the body to another as a result of an inflamed muscle compartment. Following trauma, the fascia — the connective tissue that keeps the muscle in place — cannot stretch and the resultant swelling causes a disruption in blood flow to nerves, capillaries and muscles.

Du Toit was only the 43rd person in recorded medical history to have suffered this condition. When he alerted Suter that he had lost feeling in his leg after the match had ended, the physician immediately dispatched him to Vincent Pallotti Hospital.

What followed was a series of surgeries and doubts.

The initial operation saved Du Toit’s leg, but the wound was massive. A slice the length of his thigh (about 40cm) was left open for more than a week. The muscle in his thigh was so inflamed that doctors could not pull the skin over the gash to stitch it.

Du Toit had a second operation to try to close the wound, but still the gaping chasm could not be sealed, leaving the doctors with no choice but to put on a vacuum dressing that kept the wound covered while the swelling reduced.

After 12 days, doctors were able to stitch the wound, but by then Du Toit had lost nearly 10kg, much of it from the loss of muscle mass in his leg.

A gradual rehabilitation process followed, with Du Toit making his return to the field 398 days after sustaining the leg injury.

The comeback lasted for about two months before he suffered a shoulder injury in the second Test against the British & Irish Lions last July.

It seems the injury gods have tried their best to take away what the talent gods gave to Pieter-Steph. Only, he keeps coming back.

Bok assistant coach Deon Davids confirmed on Monday that Du Toit was out of the opening Test against Wales, but exact details were kept to a minimum. “Everyone is available for the Test, except Pieter-Steph, who’s still in his rehab phase,” Davids said with the deadpan of a successful poker player.

While the news is a blow for the Boks and for Du Toit himself, the flank is used to the trauma his body has endured in one of the cruellest of sports.

“Every time you get seriously injured, you wonder whether you can make it back and perform at the same standard, and whether you will be picked,” Du Toit told Daily Maverick in a recent interview.

“It’s a physical challenge to regain your fitness, but a mental test too, because those doubts are always there.

“It doesn’t matter how many Tests I’ve played or what I’ve done with the Boks in the past. It doesn’t matter that I’ve been in similar situations before. If anything, that makes it a bit harder, as you know how challenging it’s going to be.”

Despite the setback, the Boks have a Test series to prepare for and while Du Toit’s diagnosis was disappointing, there was a lot of enthusiasm in the squad. The full 43-man group gathered for the first time on Monday, with newly minted French Top 14 winner Handré Pollard reporting for duty.

While it was a relief for the coaching staff to see the World Cup-winning flyhalf in one piece after a long French domestic season, talk of the contest against Wales quickly turned to scrumming.

On the eve of departing for South Africa, Wales coach Wayne Pivac declared that the Boks had the best scrum in the world. He’s not wrong, but in the Test arena previous form doesn’t mean much. The Boks will have to go out and prove their dominance again.

“Obviously, we would like to impose our presence in the scrums and deliver a good performance against them,” Bok prop Ox Nche said.

“It doesn’t mean that we were dominant in the scrums in the last game that it will be the same this time. The team that performs the best in that area on the day will come out on top.”

Despite many pundits writing off Wales going into the series, Davids said: “If you look at the Welsh side closely, they have players with a lot of Test caps, while some of them also played for the British & Irish Lions.

“They have also had a few weeks to prepare together as a group, and if you look back, the games we have played against them, they have been close, so we are expecting them to be prepared and to show up.”

With the match being played in Pretoria, altitude will come into play, but Davids said it didn’t necessarily mean the Boks would have an advantage going into the clash.

“Altitude is a factor for teams coming here, but they follow scientific approaches to games up here, so it will be tough. We believe they will be competitive enough to hang in there,” said Davids. DM