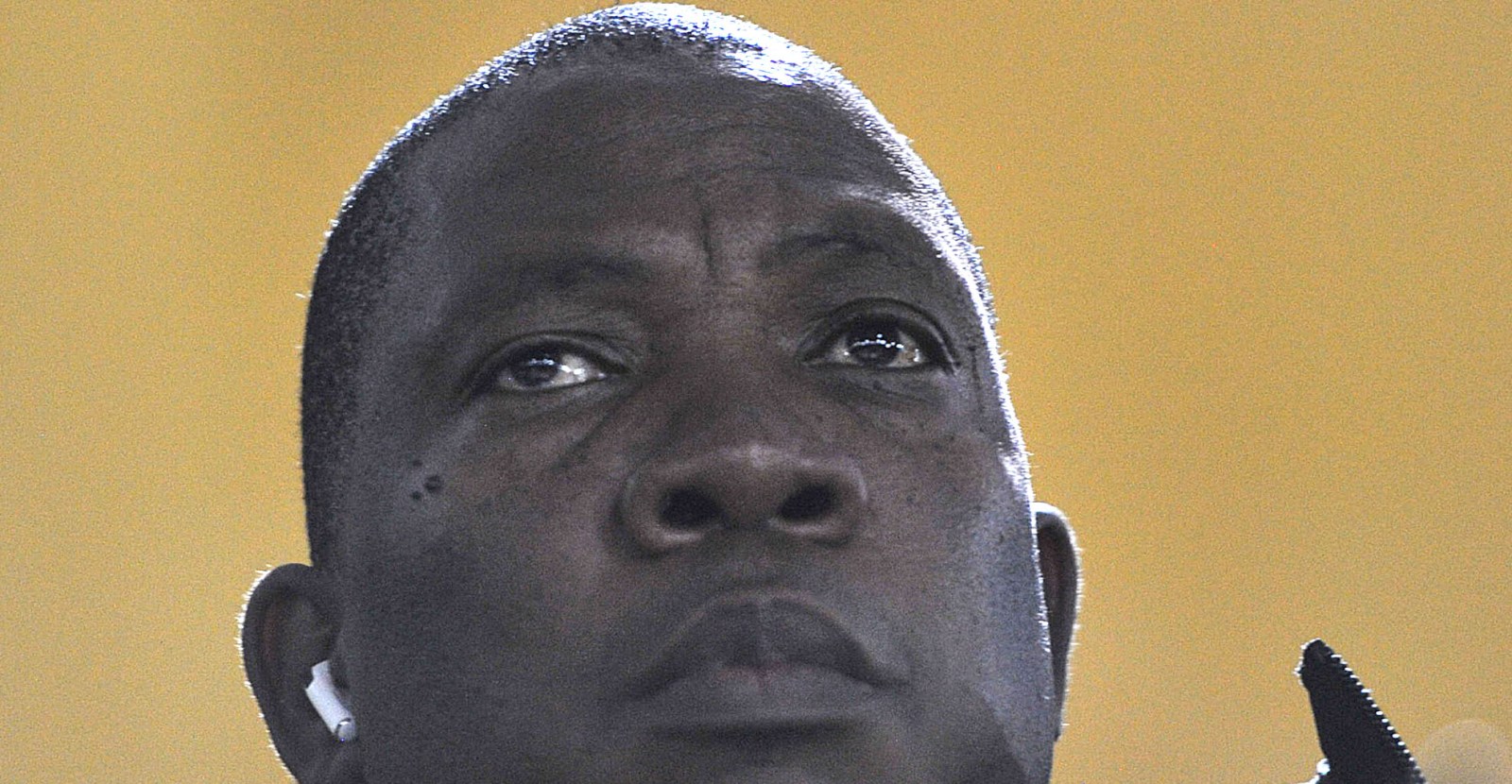 Panyaza Lesufi managed to secure the top position, but Lebogang Maile’s close allies have been tasked to run the secretariat. The leadership of the province was announced in the early hours of Monday following a chaotic conference.

The results presented a mixed bag of leaders, much like what the outcome would have been like if the party had succeeded in the attempt to build a unity slate.

Out of five leadership positions, three are occupied by newly elected Gauteng chair Panyaza Lesufi and his allies, Nomantu Nkomo-Ralehoko and Morakane Mosupyoe who are now deputy chair and treasurer respectively.

However, Lebogang Maile’s “Adiwele” slate is at a big advantage as Thembinkosi “TK” Nciza has been elected as secretary and Tasneem Motara is his deputy.

Being in charge of the secretariat will allow Nciza to wield power in the province as it means he is not likely to hold a position in provincial government. The job, which is mostly administrative in its nature, will see Nciza sitting in National Executive Committee (NEC) meetings along with Lesufi. He will be trusted to accurately announce and implement decisions made by the Provincial Executive Committee (PEC), which is the highest decision-making body in Gauteng.

Secretaries in the ANC compile conference verification reports which will determine whether branches and regions have followed correct processes and will be allowed to participate in provincial conferences. This is why the majority of the party’s conferences spend hours or even days discussing credentials, as secretaries could easily use the power bestowed upon them to rig the entire process in order to suit their own agenda.

Even in the case that he is unable to carry out his duties, the ANC Constitution will propel Motara to head the secretariat office.

The ANC Gauteng conference, which took place at the Lakes Hotel in Benoni, almost solely elected leadership and failed to hold robust engagement on policy and the future of the party in the province.

The conference started discussing credentials on Saturday afternoon, which were only adopted at around 6am on Sunday morning. The issues delaying the process involved allegations of bogus delegates and a court application by a disgruntled Ekurhuleni region member.

After hours of discussions, the #ANCGP credentials have been adopted.

Lesufi was nominated to chair the province alongside Nkomo-Ralehoko for the position of deputy chairperson, with Sedibeng chair Thulani Kunene as secretary and Nomathemba Mokgethi as deputy secretary.

Kunene lost the position to Nciza because former secretary Jacob Khawe was a third contender for the position. Khawe only managed to get a dismal 56 votes but it took away support from Kunene’s constituency.

Motara’s nomination came from the floor as did the nomination of Mosupyoe. Former Gauteng health MEC Bandile Masuku declined his nomination for provincial treasurer.  Mosupyoe only won the position by a single vote, managing to get 556 votes while her opponent Pule Mojapelo was supported by 555 delegates.

Morakane Mosupye has been nominated by a branch member from the Sedibeng region to contest the #ANCGP treasurer position. She seems to have an overwhelming amount of support. pic.twitter.com/BT0rb5B3Ll

The ANC Gauteng Provincial conference had a number of stumbling blocks to deal with before commencing with the most pressing issue, namely the 19 Ekurhuleni region votes which were quarantined.

The party’s national executive committee (NEC) held a special meeting where there was heated debate about what exactly should be done about the votes. The meeting, held on Thursday evening, went on until 4am as senior party officials mulled over the matter. They ultimately decided to allow the provincial executive committee (PEC) to deal with the matter. The provincial structure decided not to make a determination about the matter and instead allowed Ekurhuleni region members affected by the matter to vote and then to quarantine their votes at provincial level.

The #ANCGP PEC has decided that Ekurhuleni branches whose votes were quarantined will be allowed to participate in conference. Their votes will however be quarantined at provincial level until their disputes have been solved.

Preliminary results coming from the conference held at the Indaba Hotel in Fourways show that ANC Ekurhuleni provisional chairperson Mzwandile Masina won by a small margin against Doctor Xhakaza. Masina received 163 votes while Xhakaza had 151. However, once the disputes surrounding the 19 quarantined votes are resolved this could change the result. The votes will also affect those elected in the deputy chair and deputy secretary positions occupied by Jongizizwe Dlabathi and Moipone Mhlongo respectively.

The quarantined votes are from five branches coming from wards 44, 50, 40, 108, 106 and 83. The votes will be counted by Tuesday and Masina will need at least five votes to retain his majority.

While the conference was underway, there were attempts to build a unity slate with no luck. Even party treasurer-general Paul Mashatile had engaged with both Maile and Lesufi even prior to the conference but was unsuccessful in persuading them to buy into the idea. A united slate would have seen Lesufi taking the top position with Maile as his deputy.

On Saturday afternoon, Jabulani Sithole made an application with the Gauteng high court to interdict the conference. Sithole, a member of the ANC from the Mzwakhe Ngomane branch attempted to halt the sitting.

In the review application, Sithole was seeking to set aside the decision by the NEC to allow the provincial conference to go ahead. Sithole wanted the secretary-general’s office to assist the PEC with any further investigations regarding the Ekurhuleni saga and then to force the provincial structure to make a final decision about the quarantined votes.

The matter was struck off the roll with costs.

The court application to interdict the #ANCGP conference has been struck off the roll. Delegates are going back to plenary and credentials are expected to be adopted. #sabcnews

The National Youth Task Team (NYTT) had its own problems after allegations emerged that their Gauteng conference delegations were not fairly elected.

Task team convener Nonceba Mhlauli then sent a letter to the provincial leadership which quashed claims of irregularity in the ANC Youth League delegation list submitted to participate in the conference.

Mhlauli claimed that the appointment of the delegation was conducted democratically as per guidelines and precedence set by the youth task team.

“Having regard to the above, it is also very important that we indicate that the  NYTT has not resolved on a change of the manner in which the ANCYL  delegation selection process has been conducted and no individual has the authority to unilaterally and arbitrarily change an endorsement of the NYTT collective. Therefore, the delegation list which has been submitted by the ANCYL GP PCPC, as co-signed by both convenor and Coordinator for the Gauteng ANC Provincial Conference remains legitimate,” the letter read.

The province decided that this be handled by the provincial leadership of the task team and did not want to engage in the matter any further.

A frustrated delegate complains about how the #ANCGPconference has been poorly run: “You need to hate yourself to love the ANC”

Just after voting and counting had been concluded, it emerged that the party had not booked sufficient rooms for delegates as it was expected that the conference would be concluded by Sunday afternoon.

Party President Cyril Ramaphosa was supposed to deliver a closing speech surrounding the renewal of the party and the freedom charter but could not attend the conference as he is attending the G7 Leaders Summit in Germany. Mashatile was then tasked to fill in for Ramaphosa. DM