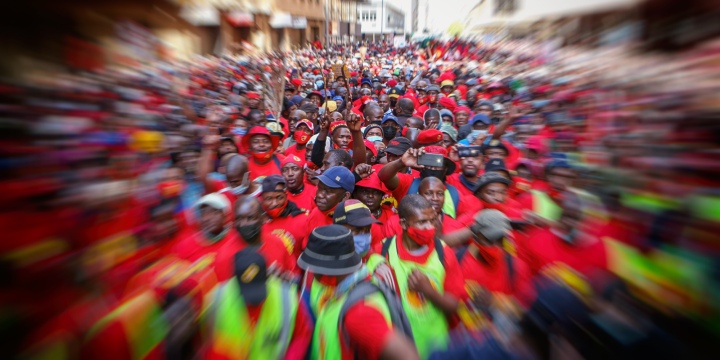 Impala Platinum (Implats) has secured a five-year wage deal with the Association of Mineworkers and Construction Union (Amcu). This is the latest sign of improving labour relations in the mining sector. But the murder of a National Union of Metalworkers of South Africa (Numsa) member in Rustenburg against the backdrop of a strike that just ended shows labour tensions remain.

Full details about the agreement will be unveiled on Tuesday at a signing ceremony. Business Maverick understands that it is similar to a five-year wage deal that Anglo American Platinum (Amplats) inked with Amcu and other unions. That means annual wage hikes that are probably in line with or possibly a bit above consumer inflation, which is currently running at 6.5% in South Africa.

Platinum group metals (PGM) prices are well down from recent highs as the outlook for the global economy sours, but producers of such metals in South Africa have posted a spate of record earnings from their previous reporting periods. So they can hardly plead poverty.

Labour relations in South Africa’s mining sector have in many ways not been so good for years. Amcu and the National Union of Mineworkers (NUM) have ceased – for now – their often vicious enmity. And several companies have struck wage deals over the past year with multiple unions whose members did not down tools.

One notable exception is Sibanye-Stillwater, which just had a three-month strike by NUM and Amcu and its South African gold operations and is the only significant PGM producer in the country that has yet to reach a wage agreement with unions.

There is bad blood galore between Sibanye’s management and the unions, which seem to have a special dislike for CEO Neal Froneman and his mostly share-based R300-million remuneration package. Still, Amcu will be hard-pressed to convince its members at Sibanye to hold out for more than they agreed at Amplats and Implats, and Sibanye may feel the heat to reach a similar outcome.

But fresh labour tensions are emerging on the platinum belt.

Numsa members had been involved in a strike at a trio of contractors that do work for Implats around Rustenburg. More than 4,000 Numsa members employed by contract at the three companies, Newrak, Reagetswe Mining Group and Triple M Mining, downed tools on Tuesday last week but the strike was suspended on Monday.

“At the general meeting workers decided to suspend the strike at Newrak mining company. This is because NUMSA won in court against the employer when they attempted to interdict the strike. The judge dismissed Newraks application for an interdict on Friday the 24th of June. She found that the strike was lawful and she ordered that Newrak must engage Implats to allow NUMSA to access the workplace. NUMSA has the right to represent workers inside Implats and hold meetings,” Numsa said in a statement late Monday afternoon.

“The strike at Reagetswe and Triple M has been interdicted and therefore strikes at both these companies have been suspended as well and workers have returned to work.”

This means that two out of three have been ruled unprotected.

The companies last week denied Numsa’s claims about exploitative wages and working conditions, including the allegation that rock drill operators were earning as little as R5,000 a month for a full month’s work. Either side should be able to present evidence such as pay stubs for example to make its case.

Numsa said also in a statement on Friday that one of its shop stewards, Mahlomola Hlothoane, was murdered Friday night by two gunmen. Another Numsa member was murdered in Rustenburg last year during a recruitment drive by the union.

“Comrade Mahlomola was a Numsa shop steward who assisted the union by coordinating recruitment and mobilizing workers at Implats,” Numsa said.

Numsa said Hlothoane was a shop steward at Reagetswe, while industry sources have disputed this. Numsa spokesperson Phakamile Hlubi-Majola told Business Maverick Hlothoane was dismissed in June last year and was supposed to be reinstated after a private arbitration process, but she said the company had not done so. This would not preclude Hlothoane from organising or recruiting.

“This is the second Numsa official who has been murdered for organizing workers at Implats. Last year we buried comrade Malibongwe Mdazo who was assassinated in a similar fashion. His killers have not been found,” Numsa said.

With no suspect apprehended yet in either case, one can only speculate about the motives behind these murders. But there has been a pattern over the years of labour officials being murdered in the Rustenburg area amid inter-union rivalry. Even as the main mining union on the platinum belt signs wage agreements, labour tensions are still bubbling around restive Rustenburg.  DM/BM