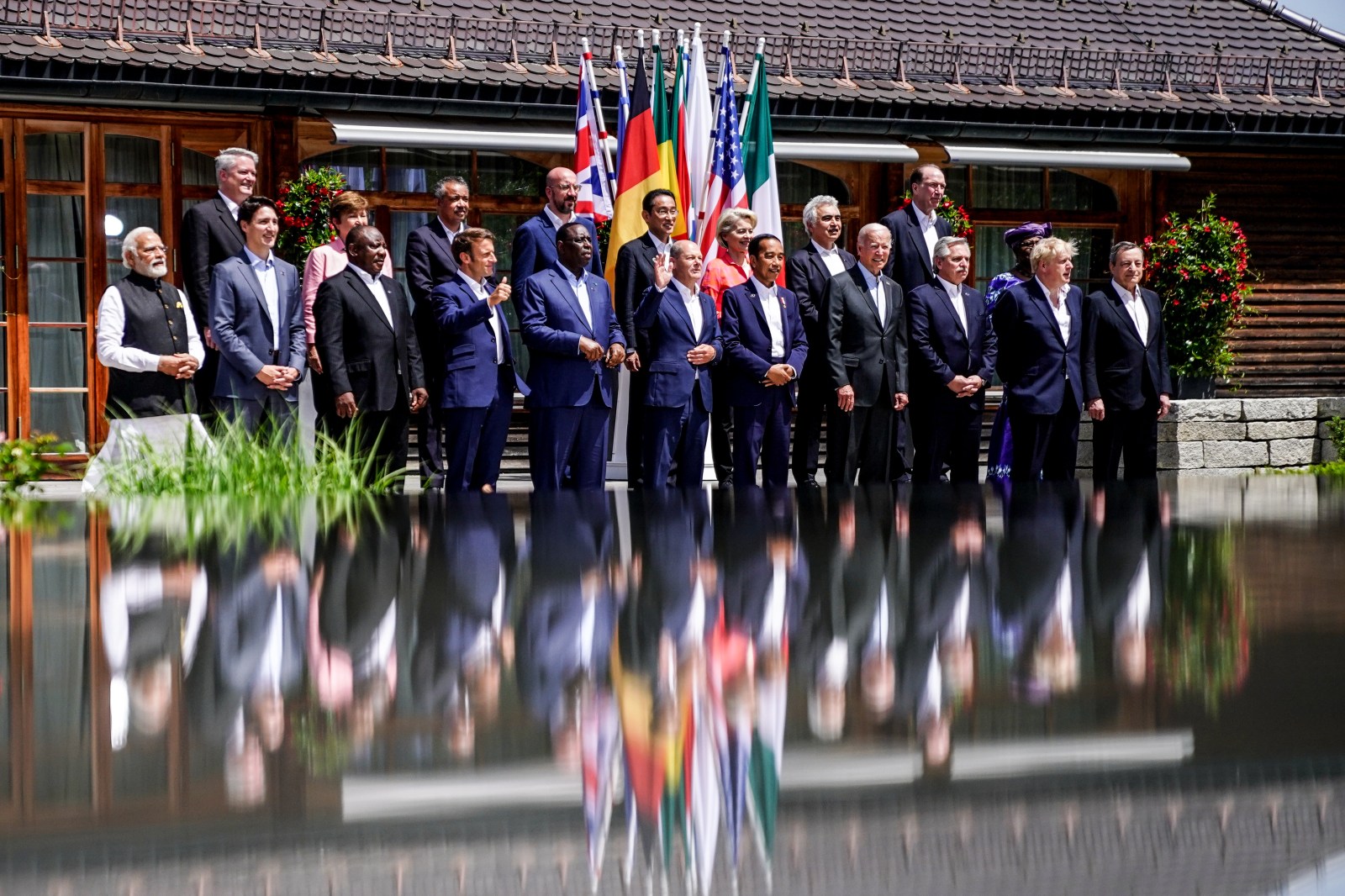 G7-leaders and participants of the outreach program pose for a family photo at Elmau Castle in Kruen, Germany, 27 June 2022. Germany is hosting the G7 summit at Elmau Castle near Garmisch-Partenkirchen from 26 to 28 June 2022. EPA-EFE/CHRISTIAN BRUNA

SCHLOSS ELMAU, Germany, June 27 (Reuters) - The Group of Seven rich democracies will commit on Tuesday to a new package of coordinated actions meant to raise pressure on Russia over its war in Ukraine, and will finalise plans for a price cap on Russian oil, a senior U.S. official said on Monday.

The announcement came as the White House said Russia had defaulted on its foreign sovereign bonds for the first time in decades – an assertion Moscow rejected – and as Ukrainian President Volodymyr Zelenskiy spoke virtually with G7 leaders meeting at an alpine resort in southern Germany.

Zelenskiy asked leaders of the Group of Seven leading industrial democracies for a broad range of military, economic and diplomatic support, according to a European official.

G7 nations, which generate nearly half the world’s economic output, want to crank up pressure on Russia without stoking already soaring inflation that is causing strains at home and savaging the global south.

“The dual objectives of G7 leaders have been to take direct aim at Putin’s revenues, particularly through energy, but also to minimize the spillovers and the impact on the G7 economies and the rest of the world,” the U.S. official said on the sidelines of the annual G7 summit.

G7 leaders would also make an “unprecedented, long-term security commitment to providing Ukraine with financial, humanitarian, military and diplomatic support as long as it takes”, including the timely provision of advanced weapons, the White House said in a fact sheet.

Western sanctions have hit Russia’s economy hard and the new measures are aimed at further depriving the Kremlin of oil revenues. G7 countries would work with others – including India – to limit the revenues that Putin can continue to generate, the U.S. official said.

India’s Prime Minister Narendra Modi is one of the five leaders of guest nations joining the G7 for talks on climate change, energy, health, food security and gender equality on the second day of the summit.

“Since it is a mechanism that could benefit third countries more than Europe,” one EU official said. “These countries are asking questions about the feasibility, but in principle to pay less for energy is a very popular theme.”

A U.S. official said news that Russia defaulted on its foreign sovereign bonds for the first time since the Bolshevik revolution in 1917 showed how effective Western sanctions have been.

“This morning’s news around the finding of Russia’s default, for the first time in more than a century, situates just how strong the actions are that the U.S., along with allies and partners, have taken, as well as how dramatic the impact has been on Russia’s economy,” the official added.

The Kremlin, which has the funds to make payments thanks to rich energy revenues, swiftly rejected the U.S. statement, accusing the West of driving it into an artificial default.

New sanctions planned by the G7 countries will target Moscow’s military production, crack down on its gold imports and target Russian-installed officials in contested areas.

The G7 leaders would task their governments to work intensively on how to implement the Russian price cap, working with countries around the world and stakeholders including the private sector, the official said.

The United States said it would also implement sanctions on hundreds of individuals and entities adding to the more than 1,000 already sanctioned, target companies in several countries and impose tariffs on hundreds of Russia products.

The agencies involved would release details on Tuesday to minimize any flight risk, a second senior administration official said.

The Ukraine crisis has detracted attention from another crisis – that of climate change – originally set to dominate the summit. Activists fear Western nations are watering down their climate ambitions as they scramble to find alternatives to Russian gas imports and rely more heavily on coal, a dirtier fossil fuel, instead.

Japan is also pushing to remove a target for zero-emission vehicles from a G7 communique expected this week, according to a proposed draft seen by Reuters.

By Andrea Shalal and Sarah Marsh