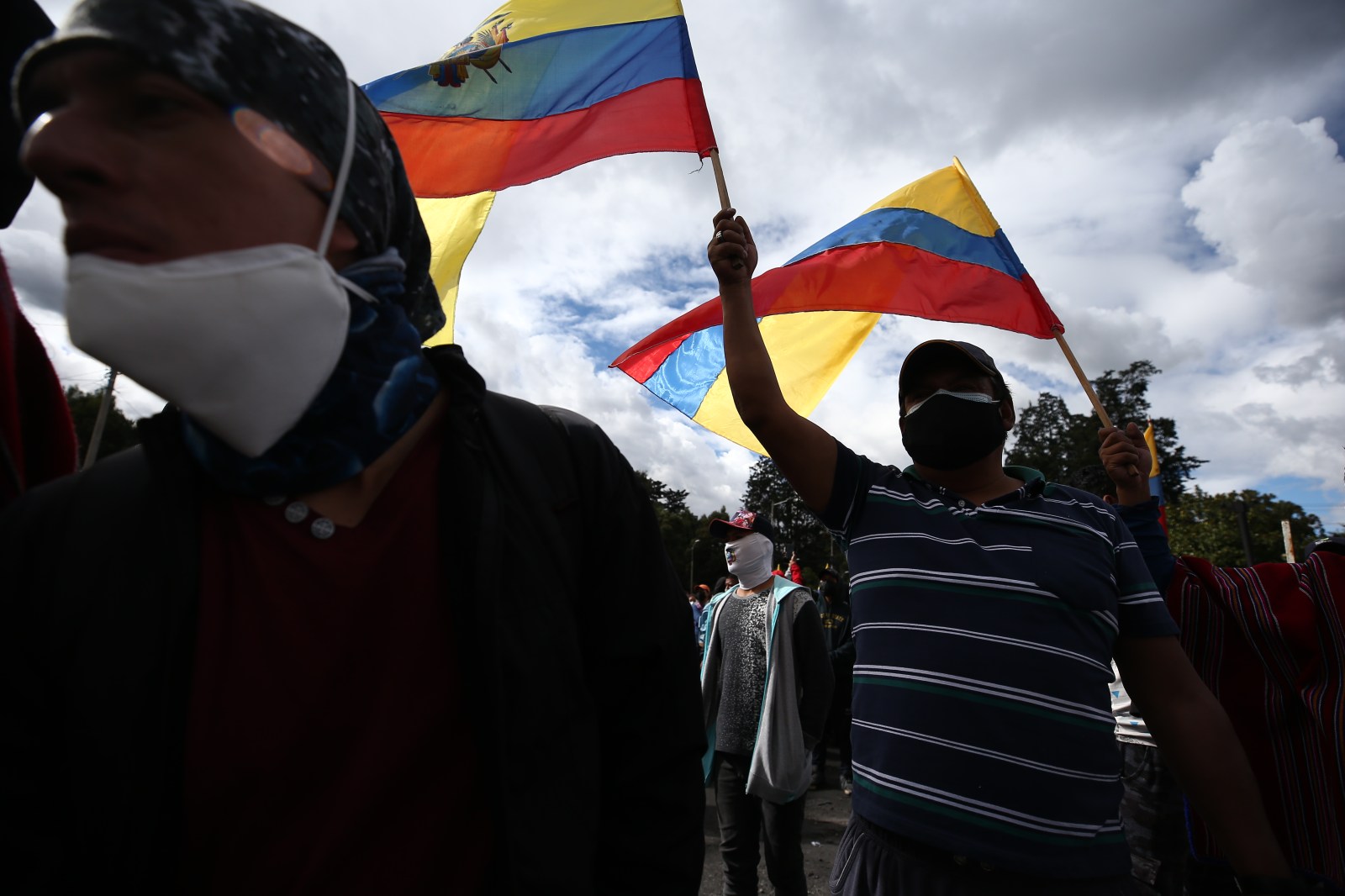 Demonstrators participate in the national strike called by the Confederation of Indigenous Nationalities of Ecuador, on the thirteenth day of the anti-government demonstrations, in Quito, Ecuador, 25 June 2022. EPA-EFE/Jose Jacome

QUITO, June 26 (Reuters) - Ecuadorean President Guillermo Lasso said on Sunday he would cut prices for gasoline and diesel by 10 cents a gallon, the latest concession to try to end nearly two weeks of anti-government protests in which at least six people have died.

The sometimes-violent demonstrations by largely indigenous protesters demanding lower fuel and food prices, among other things, began on June 13 and have slashed Ecuador’s oil production.

Lasso, whose adversarial relationship with the national assembly has worsened during the protests, had already withdrawn security measures and announced subsidized fertilizers and debt forgiveness, and his government met this weekend with indigenous groups.

The leader of the CONAIE indigenous organization, Leonidas Iza, had flagged gasoline prices and other issues as still outstanding earlier on Sunday, promising to keep up the demonstrations until they were settled.

“Everyone considers that gas prices have become the cornerstone of maintaining the conflict and though we as a government are very clear that this factor isn’t the origin of Ecuadoreans’ problems, we must think of the common good and citizens’ peace,” Lasso said.

Lasso froze prices for gasoline extra at $2.55 a gallon and diesel at $1.90 a gallon in October last year, setting off an initial series of protests.

Gasoline extra will now cost $2.45 per gallon, while diesel will cost $1.80, both still higher than CONAIE had requested.

Ecuador’s oil production has fallen by more than half because of road blockades and vandalism linked to the protests, the energy ministry said earlier.

“Oil production is at a critical level. Today the figures show a reduction of more than 50%,” the ministry said in a statement. “In 14 days of demonstrations, the Ecuadorean state has stopped receiving around $120 million.”

Vandalism, the takeover of oil wells and road closures have prevented transport of necessary supplies, the ministry said.

Before the protests, oil production was about 520,000 barrels per day.

The public oil sector, private producers of flowers and dairy products, tourism and other businesses have lost about $500 million, the ministry of production said.

Residents of Quito have complained of product shortages and Lasso said earlier on Sunday hospitals in the city of Cuenca were suffering an oxygen shortage.

CONAIE has tallied five protester deaths, while the government says four civilians have died during protests and two died in ambulances delayed by blockades.

Lawmakers continued debate on Sunday on an effort to remove Lasso from office, though it appears opposition groups do not have the necessary support to do that.