Zondo, an extinction-level event for the ANC? Not an im...

With the release of the final volumes of the Zondo Commission report, and the damning findings it makes about corruption, lawlessness and incompetence within our state, the focus is now on the ANC’s response and its president, Cyril Ramaphosa. It is likely that his actions will set the tone for the party, whose reaction may determine whether it survives in the national government in 2024.

Chief Justice Raymond Zondo’s findings detail how a group of powerful players took over our state and used it to their own ends.

Just a small list of tidbits: There was a campaign to infiltrate and influence the media run by former State Security Agency head Arthur Fraser with Iqbal Survé’s African News Agency as its “training” partner; the SSA cash handed to former president Jacob Zuma every month by then State Security minister David Mahlobo; the way in which nobody in the party supported Prasa chair Popo Molefe, leaving him isolated when he tried to stop corruption. The list alone would be longer than this article.

And, crucially for our current situation, there is the evidence and the findings that Ramaphosa himself could have — and should have — done more to stop State Capture from proceeding. 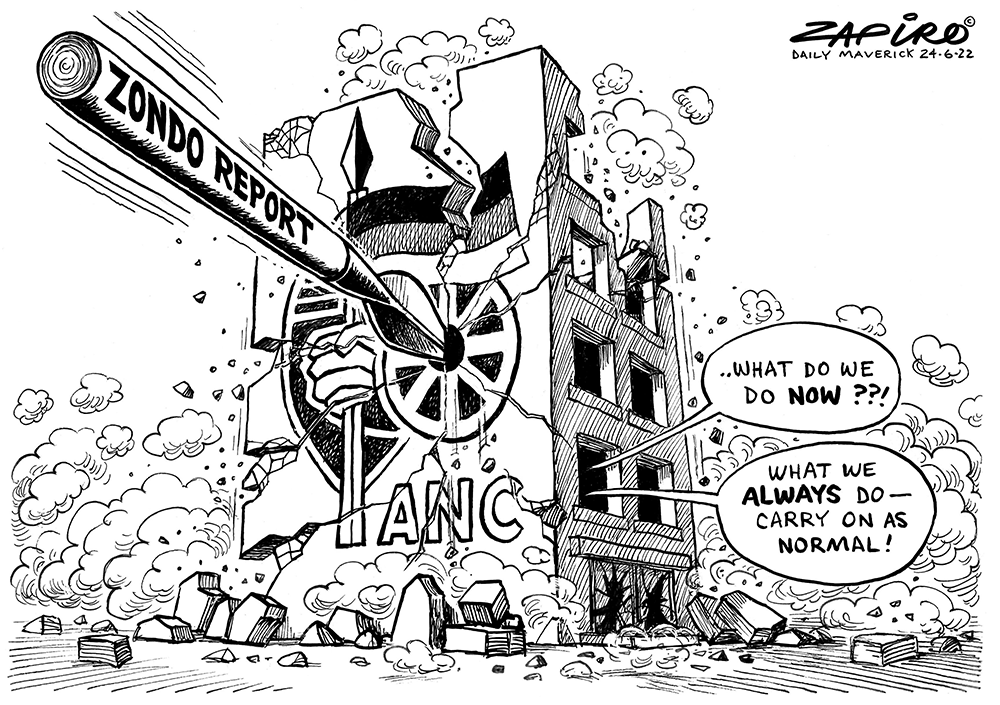 But within all of that is this: “The natural conclusion is that, during this period, the most dominant political faction — the ANC under President Zuma — permitted, supported, and enabled corruption and State Capture.”

This finding, that the ANC “supported, and enabled corruption and State Capture”, just two years before the 2024 national election, is obviously crucial.

Ramaphosa and the ANC itself may now say that this is what happened under Zuma, that the party has changed.

Sadly, there is little evidence of this.

For a start, there is the response by Ramaphosa to Zondo’s findings. On Thursday, 23 June, the Presidency released a statement saying:

“The President has committed to consider the Commission’s report in its totality and to present a comprehensive response and implementation plan to Parliament. The Presidency will therefore not respond at this stage to specific aspects of the Commission’s findings and recommendations.” Ramaphosa has said that he will present the response in four months’ time.

So far there appears to be no willingness from other ANC officials to respond publicly, other than an opinion piece by national spokesperson Pule Mabe.

Indeed, Ramaphosa has indicated that he will need four whole months to prepare a response “in its totality”. However, the public anger in our society is such that it is not clear if either Ramaphosa, or the ANC, has that much time.

(Cynics would say that ANC/Ramaphosa would certainly use these four months to deflect attention/invent another crisis. Right now, there are ever louder screams of xenophobia on social networks that in some regions have spilt into real world, with horrific violence in Gauteng townships and the burning of the Yeoville market. It is entirely possible that xenophobia and KZN could become such boiling points that the Zondo report gets forgotten for a while. — Ed)

It seems unlikely that the people key to this — the voters — will have the patience to wait that long, or be easily sidetracked. Nor should they.

Filling in the blanks

For a start, does this mean that Ramaphosa will retain Mahlobo as Deputy Minister of Water Affairs and Sanitation? This is a man who has been found central to funnelling government — our — cash to Zuma on a regular basis, and who presided over multiple projects that, in any functioning legal system, would have landed hundreds in jail, and for a long time. Mahlobo has so far refused to explain his role in this debauchery.

There are many other people whom the ANC has refused to act against. For example, Mosebenzi Zwane is still the chair of the portfolio committee for Transport, there has been no public move against him either.

When the party is asked about people like this, it refers to its Integrity Commission, saying that the implicated parties must go before it.

But, as Zondo himself points out, it was obvious back in 2013 that Zuma was a kingpin of a national corruption scheme. From the moment that it became public that the Guptas had landed a plane at the Waterkloof Air Force Base, it was clear what was happening.

The ANC’s Integrity Commission told Zuma to resign in December 2016. He did not do so. And the committee did absolutely nothing about it. It was only months later, in the hours after Zuma’s dramatic late March 2017 reshuffle (when Pravin Gordhan was fired as Finance Minister and replaced by Malusi Gigaba) that the committee’s view became public.

More recently, after Ramaphosa claimed to have started this process of “renewal”, this same committee told Deputy President David Mabuza and Deputy Finance Minister David Masondo that it was concerned about their conduct and that they should not occupy their positions.

They are still happily in their positions now. Literally hundreds of them.

Bluntly, there is no evidence of the ANC’s Integrity Commission playing the role it is supposed to play. Voters will see this as a slap in the face.

At the same time, some of those implicated in this report may well say they will challenge its findings, a process could take more than two years for every complaint. Some of them are in senior positions.

Does this mean Gwede Mantashe, who has stated he will challenge the report, gets to stay in his two jobs, both as ANC chair and as minister of Energy and Mineral Resources? Does he also get to aspire to a Top Six position at the party’s national conference?

And, if so, does that not incentivise Zandile Gumede and others to simply challenge decisions by the National Prosecuting Authority to charge them, stay in office and continue as though nothing has happened?

The immediate tactical benefit for the ANC and Ramaphosa would be to hide behind “processes” and bide their time until the 2024 elections.

It probably has no other choice. Anything else would result in chaos that is certain to spread to the rest of the country. Any meeting of its National Executive Committee (NEC), which has to decide on a proper response, is bound to devolve into fight, virtual or otherwise.

So many members of the ANC NEC are implicated in so much wrongdoing (whether in the Zondo report or elsewhere) that it seems impossible to imagine the body developing a comprehensive response and essentially voting for its own jail term.

People such as Malusi Gigaba, Faith Muthambi, Zwane, Zizi Kodwa, Sifiso Buthelezi, Bongani Bongo, Collen Maine, Mahlobo, Joe Maswanganyi, Siyabonga Cwele, Thabang Makwetla, Nomvula Mokonyane and others all have questions to answer about their role during this period. They do not have a history of generosity or making decisions that are in the interest of South African people.

What’s more, any bid by Ramaphosa to force people to step aside would result in him facing screaming challenges about the Phala Phala farm robbery – already Tony Yengeni and Ngoako Ramathlodi have been reported as trying to bring this up in an NEC meeting.

This reveals the impossibility of the ANC formulating a fair, reasonable — proper — response. At present, or ever again.

Perhaps the only option would be to leave it to branch delegates in December. But that also carries risks, because the chaos will lurk there, and the complete collapse of the conference is not a zero-prospect anymore. The ANC would never recover from such an outcome.

The most likely outcome of this royal mess may be for the ANC to muddle through for as long as possible and that Ramaphosa’s response, even if it is in four months’ time, will be a bunch of toothless platitudes.

Mind you, in four months, Ramaphosa may come out of the gate swinging; the SA public’s trust in the ruling party of the past 28 years has cratered, never to be recovered, and people have simply stopped believing.

The most important consequence of the Zondo Commission’s report is what will happen to the ANC in 2024. That perhaps, from initial predictions immediately after last year’s local elections that the party could still win about 48% to 52% of the vote, it will slip much, much further down.

The projection that it would still be the dominant party in a coalition after the poll may no longer hold. That, in fact, it may even be possible, after the elections, for a national coalition of opposition parties to form a national government without the ANC. DM