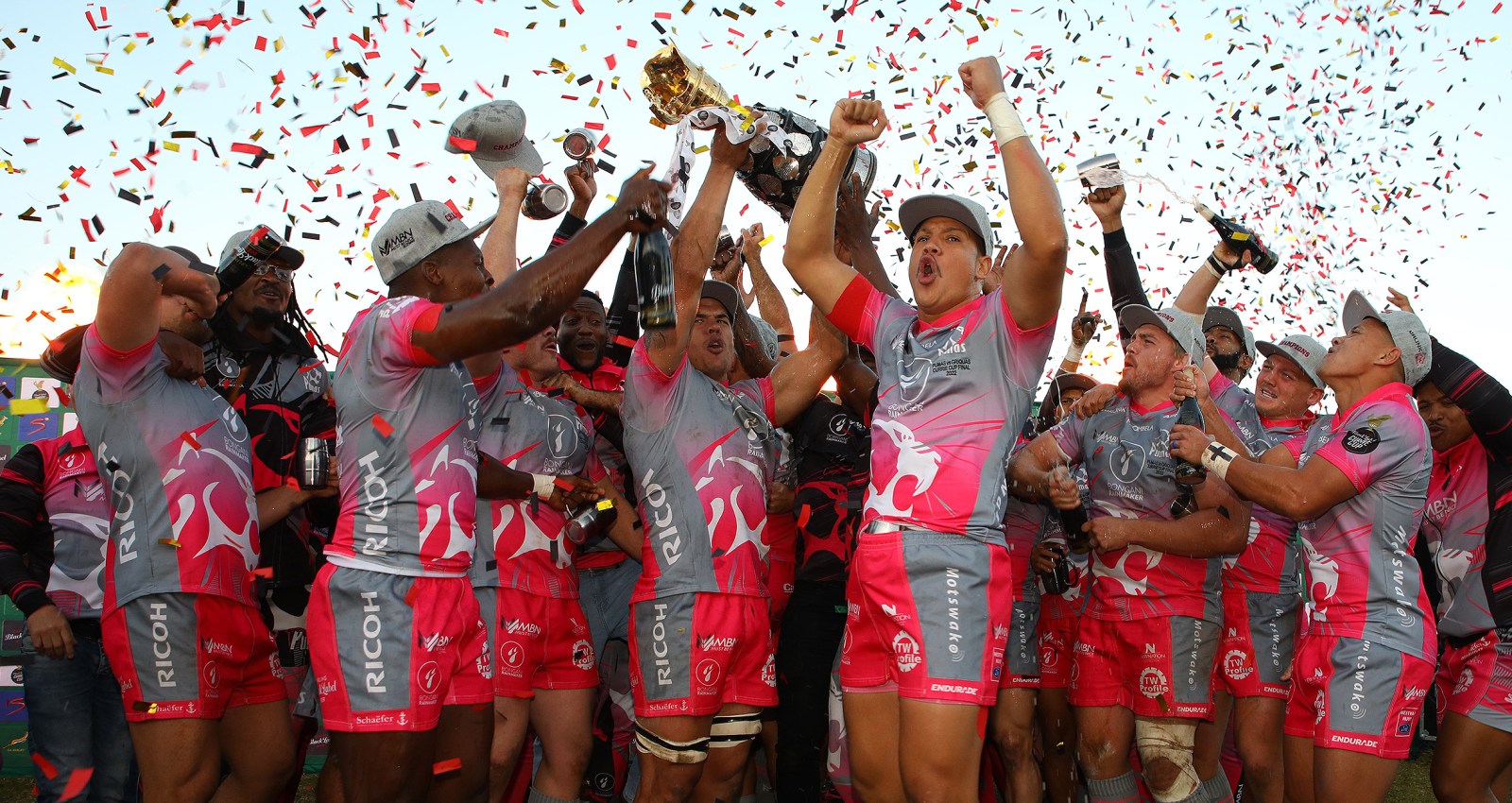 The Pumas celebrate winning the 2022 Currie Cup final against Griquas on June 25, in Kimberley. (Photo by EJ Langner/Gallo Images)

The Pumas clinched a maiden Currie Cup title with a stunning victory over Griquas in Kimberley on Saturday. ‘This is rugby. What we saw was rugby,’ said Pumas coach Jimmy Stonehouse. The win underlines how the grand old dame of rugby tournaments still has life yet.

The Pumas became the eighth team in history to raise the Currie Cup trophy on Saturday, after they outplayed the Griquas 26-19 in Kimberley.

The side from Mbombela were playing in their first Currie Cup final and totally outclassed the Griquas side in all departments, to land the title in front of 11,000 roaring fans at Griqua Park.

“To be honest, I thought we had stage fright. We didn’t pitch up in that first half, and there were too many mistakes,” said Griquas head coach Pieter Bergh.

“Maybe with this young squad, the week was too emotional. It was a huge home game, there was a lot of chat about 1970 [the last time Griquas won the Currie Cup].

“It looked like there was only one team who wanted to win, because we just weren’t there. The look I got on the players’ faces was like they still had stage fright, even at half-time,” added Bergh.

The opening quarter of the historic match was error-ridden, resulting in limited try-scoring opportunities as both teams dealt their respective blows through penalty kicks.

Both Pumas inside centre Eddie Fouché and Griquas fullback George Whitehead had their kicking boots on as the Griquas took a 6-3 lead.

A brilliantly executed set-piece move from the Pumas then saw them at their free-flowing best, with excellent interplay and offloading between backs and forwards.

With the Griquas defence on the back foot, flyhalf Tinus de Beer slung a long pass to electric fullback Devon Williams, to dot down in the corner. Fouché converted from the touchline, to give the Pumas a surprising 10-6 lead.

Another exchange of penalties by both teams’ kickers made it 13-9, before a brilliant maul drive by the Pumas was converted into five more points by hooker Eduan Swart, as the Pumas took an 18-9 lead into the dugout at half-time.

Fouché extended the lead early in the second half with his accurate boot before another piece of dazzling rugby by the Pumas team produced a try for captain Willie Engelbrecht in the left corner, to take the score to 26-9, leaving the Griquas with a lot to do in the final stanza.

“The whole season we’ve played our best rugby when we’re behind, and when we were far behind, we started playing. But by then it was too late,” said Bergh.

A determined run by winger Munier Hartzenberg showed some of the Griquas trademark fighting spirit with an excellent solo try, as they clawed their way back into the contest with the score at 26-16, with 20 minutes left to play.

But quick line speed and intensity on defence from the Pumas kept the Griquas at bay, as they threw everything they had at the Pumas, in the final quarter.

With three minutes left on the clock, Whitehead slotted another penalty to create a frantic end to the match – the Griquas needing a try to level the score.

But the Pumas kept their composure and won a turnover penalty before kicking the ball into touch. To seal their maiden title, in their first Currie Cup final.

Pumas coach, Jimmy Stonehouse, who has overperformed – with a miniscule budget – year after year with his Pumas side, could not contain his excitement after the final whistle.

“It’s amazing,” said Stonehouse. “When that whistle blew at the end, it was just incredible.

“We try really hard at the Pumas, and for me, this is the greatest goal I’ve achieved in my life. I just want to thank all the coaches for what they brought week in and week out.

“I don’t have words for it. Hopefully, my emotions speak for themselves. I just love this team.”

Stonehouse has been at the helm as Pumas head coach for 13 years during two stints, dating back to 2008, while he also served as the union’s under-18 coach in the 1990s.

“This is rugby. What we saw today was rugby,” he reflected after the match.

“To see all these people here and have stadiums fully open again is unreal. It was a great game, the people loved it, and the Currie Cup definitely does not belong in a museum.

“It gives players an opportunity – as it did for Ross Cronje, Faf de Klerk, Rosko Specman, Vincent Koch – to get into big unions.

“Every one of them deserves a chance, and rugby is about getting opportunities,” Stonehouse said. “This must give them those opportunities. Hopefully other unions have seen them and will take them in a year or two. That’s what this game is about.”

Bergh was gracious in defeat, acknowledging that the occasion might have got to his players.

“I have to congratulate Jimmy [Stonehouse] and the Pumas. We were never in the game, and they dominated us from the beginning,” said Bergh.

“The plan was to not give them line-outs and to kick contestables, but we didn’t kick one contestable the whole game. We didn’t execute our plan.

“There were so many things. They were more physical than us, their defence was better, their set-piece was better. And in all areas of the game, we were second best.

Bergh summed it up: “If you don’t pitch up, then you will be second best.” DM