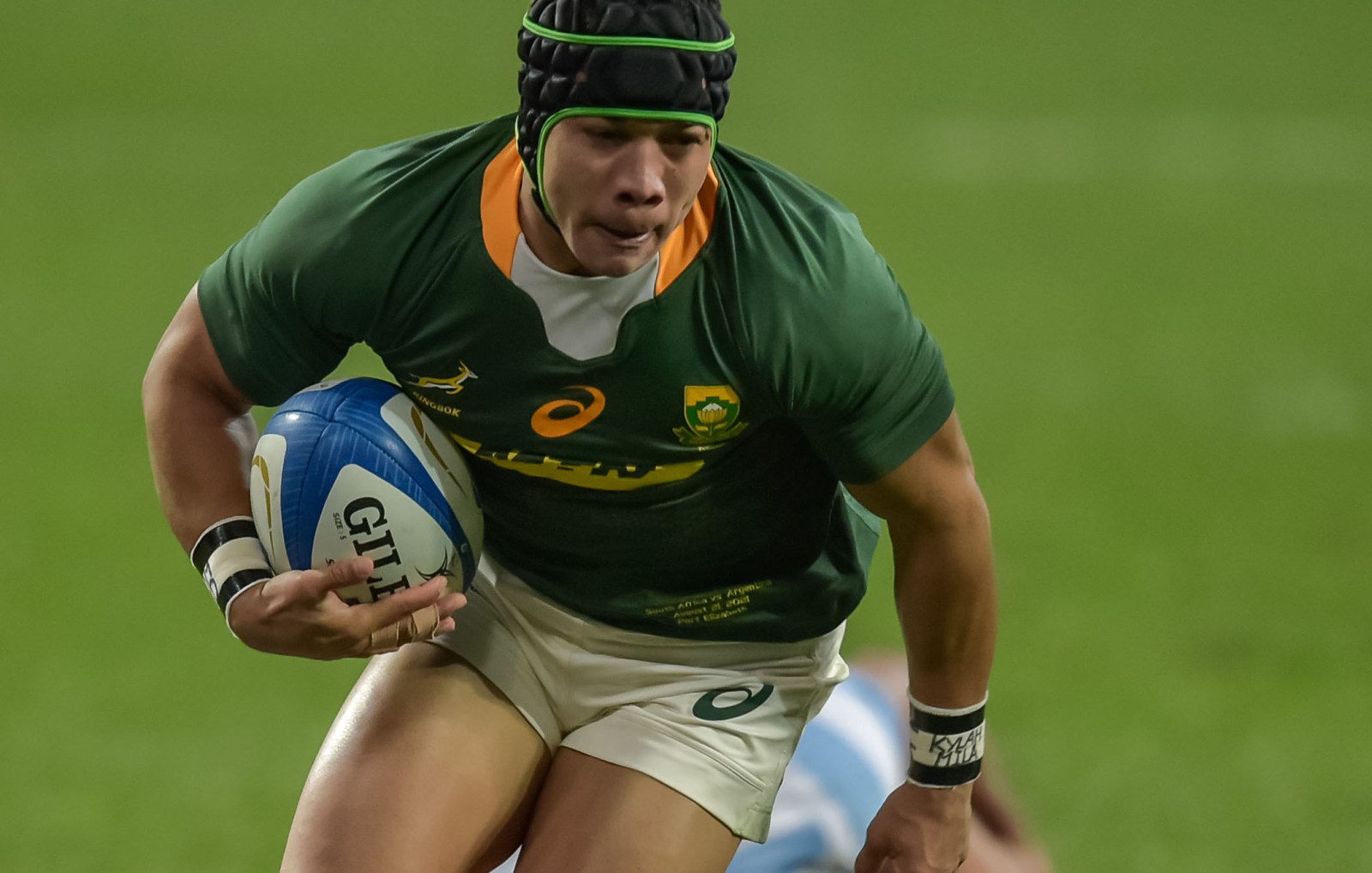 Cheslin Kolbe has collected more medals and accolades over the past five years than most have over the course of a career, but he wants more.

In the lead-up to the United Rugby Championship (URC) final between the Stormers and the Bulls at Cape Town Stadium, a vocal crowd of 31,000 delivered one of its biggest cheers in acknowledgement of one of the Western Cape’s favourite sons.

Springbok legends Victor Matfield and Cheslin Kolbe were asked to walk on to the pitch and show the URC trophy before kickoff. When the stadium announcer confirmed the identity of the shorter figure in the black coat, the partisan Stormers crowd let out a deafening roar.

“Cheslin Kolbe is back in Cape Town,” the PA blared. Though the prodigal son was not on the team sheet, his return to the Mother City appeared to be a good omen for the Stormers. The Cape franchise went on to beat the more fancied Bulls and clinch their first intercontinental title.

Kolbe remains a passionate Stormers supporter. After representing the team for five seasons, he joined high-flying Toulouse. The elusive winger won the European Champions Cup as well as the Top 14 title with the French club.

He earned his first Test cap in 2018. After being snubbed by previous Bok coaches because of his small frame, Kolbe found himself valued by a more progressive mentor in Rassie Erasmus, who encouraged him to play to his strengths.

The Boks won the 2019 Rugby Championship with Kolbe in tow. They lifted the World Cup in Japan after Kolbe stepped past several defenders to score an unforgettable try in the final.

Kolbe carried that game-breaking form through to the 2020 club season, but was denied a further opportunity with the Boks owing to Covid-19 restrictions. He featured in the monumental series against the British & Irish Lions in 2021, and scored a decisive try in the third and final Test.

Kolbe broke down with a knee injury several weeks later and was ruled out for the rest of the Test season. He fought back to regain his fitness and to feature for his new club, Toulon, only to break his thumb in April and spend more time on the sideline.

Although Kolbe has collected more winners’ medals and accolades over the past five years than most have over the course of a career, he feels he has more to prove. For all that he’s achieved, he’s only represented the Boks in 18 Tests. He wants more.

Denied the chance to build

Kolbe hopes his luck will hold during the 2022 Test season, and that he will have the opportunity to take his game to the next level.

One of South Africa’s most important players, he is set to make his comeback when the Boks battle Wales in the season-opener at Loftus Versfeld on 2 July.

“2021 was a year of highs and lows for me,” Kolbe told Daily Maverick.

“There was so much anticipation around that Lions series. I remember watching the 2009 series as a kid and marvelling at the crowd and atmosphere.

“In 2021, the whole situation with Covid and the absence of crowds made everything that much more challenging for us,” he said.

“On the other hand, we were forced to come together as a team. It’s something I will never forget. We really gave it our all in that series, and I was grateful to come out of it with the winning result.”

Kolbe played one Test against Argentina in the Rugby Championship. He travelled with the squad to Australia for a four-match tour, but didn’t feature at all because of his injury. He was ruled out of the subsequent tour to the UK.

“At the time of that injury, I was playing really good rugby. I felt like I had been building for some time. Accepting that I had to spend so much time on the sideline… was really challenging,” he said.

“There were some tough times in rehab, but I never lost sight of the bigger picture. I fought hard to get back. I knew that I had to play for Toulon if I wanted to be considered for the Boks.”

Then the 28-year-old broke his thumb while on duty for his club and was concerned that he might not recover in time for the Boks’ three-Test series against Wales.

“It was frustrating on two fronts. I’d just joined Toulon, so I wanted to be on the field. I’d also set myself some goals with the Boks, so I was desperate to be ready for the first series of the new season,” he said.

Fortunately, Kolbe bounced back to play for Toulon at the back-end of the club season. He was selected in the 43-man Bok squad for the series against Wales.

He laughs when he’s asked if he will — as coach Jacques Nienaber has suggested — slot in at flyhalf if there is an injury crisis over the course of the three Tests.

The Boks have two specialist flyhalves in Handré Pollard and Elton Jantjies, as well as a utility back in Damian Willemse who can do the job. Nienaber, however, has been impressed with Kolbe’s performances at No 10 for Toulouse in previous seasons.

“Wing is the position I prefer, but I would obviously contribute wherever I’m needed,” he said, before detailing his primary goal in 2022: “As a player, you just want to build some continuity. I just want a consistent run in the Bok jersey. One opportunity would be great. Three would be amazing. I feel that I have more to give.

“I don’t expect to be the perfect player, but I know that I can improve.

“A lot of the process is down to game time, which is why I’m working so hard to put myself in the picture for those three games against Wales.”

Whether he features at wing, fullback or even flyhalf, a highly motivated Cheslin Kolbe looks set to have a big impact in the coming series against the Dragons. DM