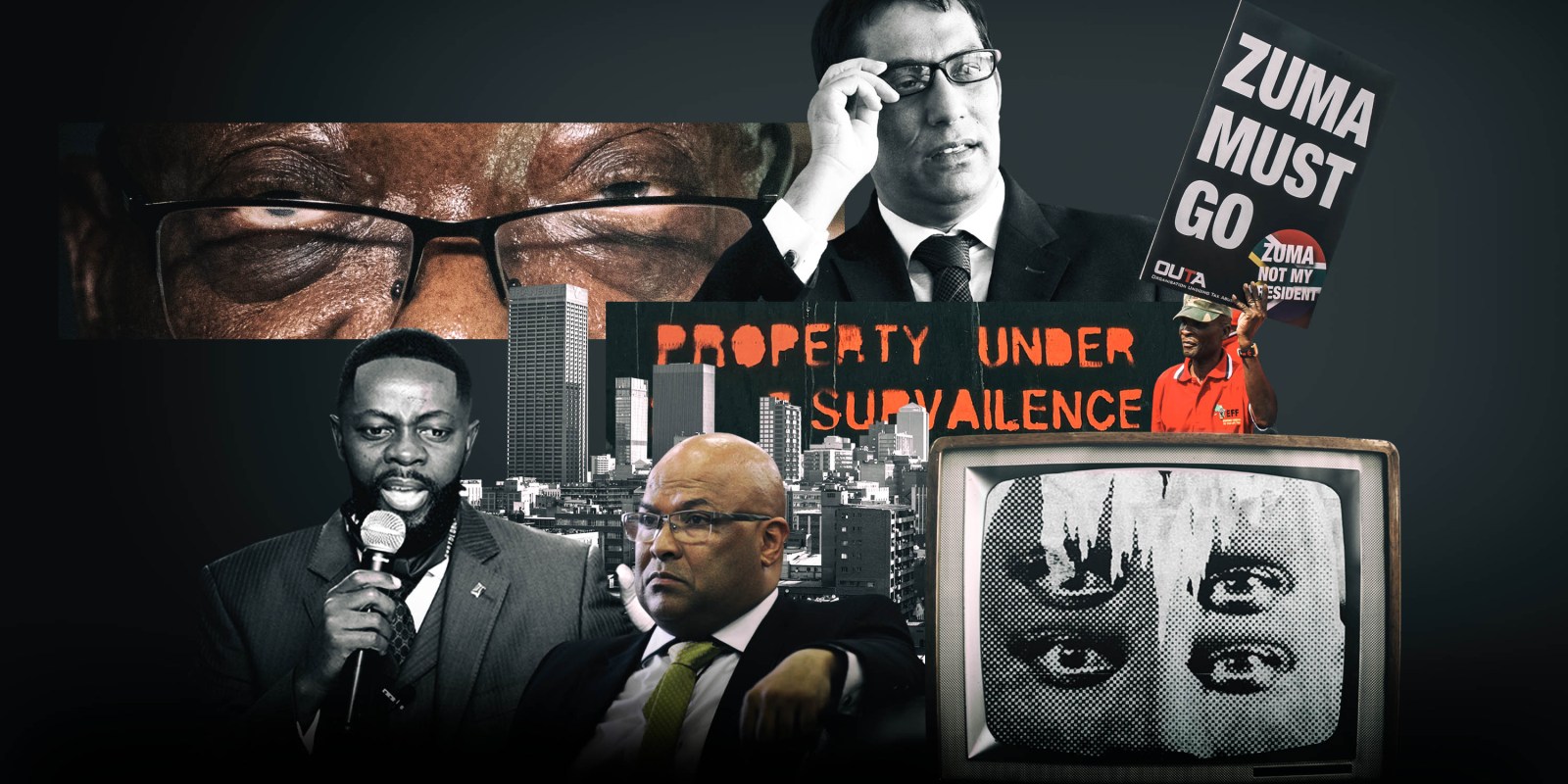 The Zondo Commission’s report on the State Security Agency (SSA) shows an aggressively paranoid government that spied on its citizens, its students, its media, its activists, its judges, its fellow ministers and its academics.

It was an administration that privatised government functions, illegally spending millions of rands of public money to do so.

The fifth and final instalment of the commission’s report was handed to President Cyril Ramaphosa on Wednesday night and set out some of the Fifth Administration’s outrageous abuses of the law.

In 2015/16, during peak State Capture, the SSA embarked on “Project Wave” aimed at “penetrating and establishing operational ground within identified continental, regional and global territories”.

This would be accomplished using “deep cover” members. The initial plan was quite different from the activities that were carried out later under this project.

Project Wave became an attempt at “infiltrating and influencing media” in South Africa.

Its budget was R48-million, R20-million of which was ultimately gifted to Survé’s African News Agency (ANA), this while “there is a legitimate arm of government that deals with publicity for government activities”.

The project was launched by the SSA “to counter bad publicity for the country and the then president and the SSA”, which necessitated “the infiltration and influencing of the media”.

An unnamed media house had proved the “most difficult to penetrate for two reasons: either the remuneration demands were higher than what the operatives could offer or the targeted media house was equally on a security alert. Hence immune to approach or to be recruited.”

When the plan proved more challenging than expected, the bulk of the funds went to Survé’s operation. In 2016, ANA sent two invoices addressed to Thulani Dlomo. They were settled in 2017 and signed off by Arthur Fraser.

A year after the establishment of the project, a group of “co-workers” were recruited and trained after Dlomo had encouraged staff to “bring people”.

Project Wave reported it had established that foreign intelligence agencies planned “destabilisation of the democratic rule in South Africa” and claimed that senior Cabinet members were conspiring “to effect regime change”.

The report was found by investigators in a safe at the SSA.

This special operation saw then president Zuma receive R2.5-million a month in 2015/16, which was upped to R4.5-million in 2016/17. Minister of State Security David Mahlobo acted as Zuma’s personal ATM, transporting large amounts of cash to the president.

Several witnesses, the commission found, had corroborated each other in this instance.

While the protection of political office bearers is a function of the South African Police Service, Zuma, through his most trusted spy,  Dlomo, set up a VIP protection unit accountable to SSA operatives and the President himself.

The SSA budget ought not to have been used for this purpose as this would amount to double-dipping. The undercover agents were trained in a foreign country while this was not a competence of the SSA to offer.

People close to Zuma or those who were in the spotlight and offered VIP protection included Dudu Myeni, Shaun Abrahams, Collen Maine and Yolisa Matakata.

The commission found that “VIP protection is a sensitive function and should not be a free-for-all activity. Some of these illegally appointed agents were tasked with protecting Deputy President Cyril Ramaphosa.”

Operation Mayibuye was initiated by Dlomo and approved by the then SSA director-general Sonto Kudjoe in 2015, the same year most of the other Central Directorate for Security Operations (CDSO) projects were approved. It was given a budget of R54-million between 1 April 2016 and 31 March 2017.

Mayibuye was “a collective name for several projects” and was established to provide counterintelligence support “to step up state authority and organs of governance”.

It was also aimed at countering “hostile behaviour or radical interests aimed at undermining the rule of law and governance in general”.

Operation Sesikhona was aimed at “neutralising protests” of a group of homeless activists in Cape Town.

The project also aimed to destabilise the EFF “by exploiting internal divisions”.

Project Hollywood — in which the SSA spies on politically connected individuals

Launched in November 2016 to get going in April 2016 and renewable every three months, agents were sent out to surveil and illegally intercept communications of high profile or politically prominent or connected individuals and government officials.

This cost R800,000 a month, cash; however, it later turned out a company that purportedly undertook the work (unnamed in the report) did not exist and SSA could not account for the monies paid.

Project Lungisa — spying on ‘individuals intent on undermining the authorities’

Launched in December 2015 and renewable every three months, the objective of this mission was “to neutralise and counter activities of individuals intent on undermining the authorities”.

Zenzele Economic Advisory drew down R500,000 cash a month to provide “economic services, data collection, analysis, collection of financial statements from banks, company and ownership analysis and compiling of reports” to the SSA.

In this instance too the details provided by the “service provider” were fictitious.

While this project was aimed at “handling sources within the judiciary to influence the outcome of cases against President Zuma”, the commission said this project needed to be treated with “extreme caution”. The project could have been “a ruse for moneymaking undertakings”, the commission found. No evidence has been brought that any money was paid to judges.

Considering the monthly amounts given to Mahlobo in this instance, this project would have soaked up R60-million.

When Jacob Zuma claimed he had been poisoned it was Mahlobo who took the investigation close to home. So close that he accused the President’s wife MaNtuli of being the culprit.

Operation Tin Roof, aimed at procuring “a safe house” for and maintaining MaNtuli Zuma cost R5.2-million with a monthly withdrawal of R800,000.

More than 40 individuals were involved in the operation, which saw MaNtuli Zuma and her two children banished from Nkandla and destined to a peripatetic life dependent on handouts from the SSA.

Some of the funds were used to renovate houses she had been moved to as well as for personal protectors.

The NPA declined to prosecute MaNtuli Zuma as no evidence could be found that she had tried to murder her husband.

While De Kock had been released from an extensive term in Pretoria’s C-Max prison for his role in apartheid killings and was the responsibility of the Department of Correctional Services, the SSA took it upon itself to provide him with a safe house and protection.

Here, Mandisa Mokwena, a non-SSA member who turned up later at the SA Revenue Service and also the rail agency Prasa, was instrumental in setting up a team of toxicologists to test Zuma’s food and bedding for life-threatening substances.

This initially cost R500,000 a month, increasing to R1.5-million a month. Mahlobo was instrumental in setting up the project.

Two withdrawals totalling R9.5-million were made by an operative.

Mokwena stated under oath that all “intelligence products” were submitted directly to Zuma.

Despite this close scrutiny of his food intake and anything that could make contact with the President, his wife was accused of poisoning him.

The commission found it was not clear whether the money spent on the project “was not a ruse to siphon funds out of the CDSO”.

Funding a fake union to undermine a real union in Marikana

The SSA funded a bogus union, the Workers Association Union, in the Platinum Belt to destabilise the legally constituted mining union Amcu. Zuma was cited directly by Thebe Maswabi, who was paid to set up the union. Zuma later settled out of court.

This was aimed at influencing the direction of the student movement by the SSA as well as infiltrating organisations representing civil society, such as Right2Know, the #Zumamustfall “movement” and Casac.

The SSA gave support to Gumede by providing her with security services and resources for political mobilisation.

The Boast Report, in which the SOU crows about its illegal activities

This was a report to Fraser in 2017 in which activities of the SOU that were deemed to have been successful were set out.

These included operations disrupting the distribution in 2016/17 of CR17 campaign regalia as well as the transportation “of dissident groups from Gauteng” in relation to an ANC January 8 Statement rally in Rustenburg.

Agents had also successfully infiltrated the Zuma Must Fall movement during the February 2016 State of the Nation Address and scuppered a planned protest. The Guptas? Who they? DM