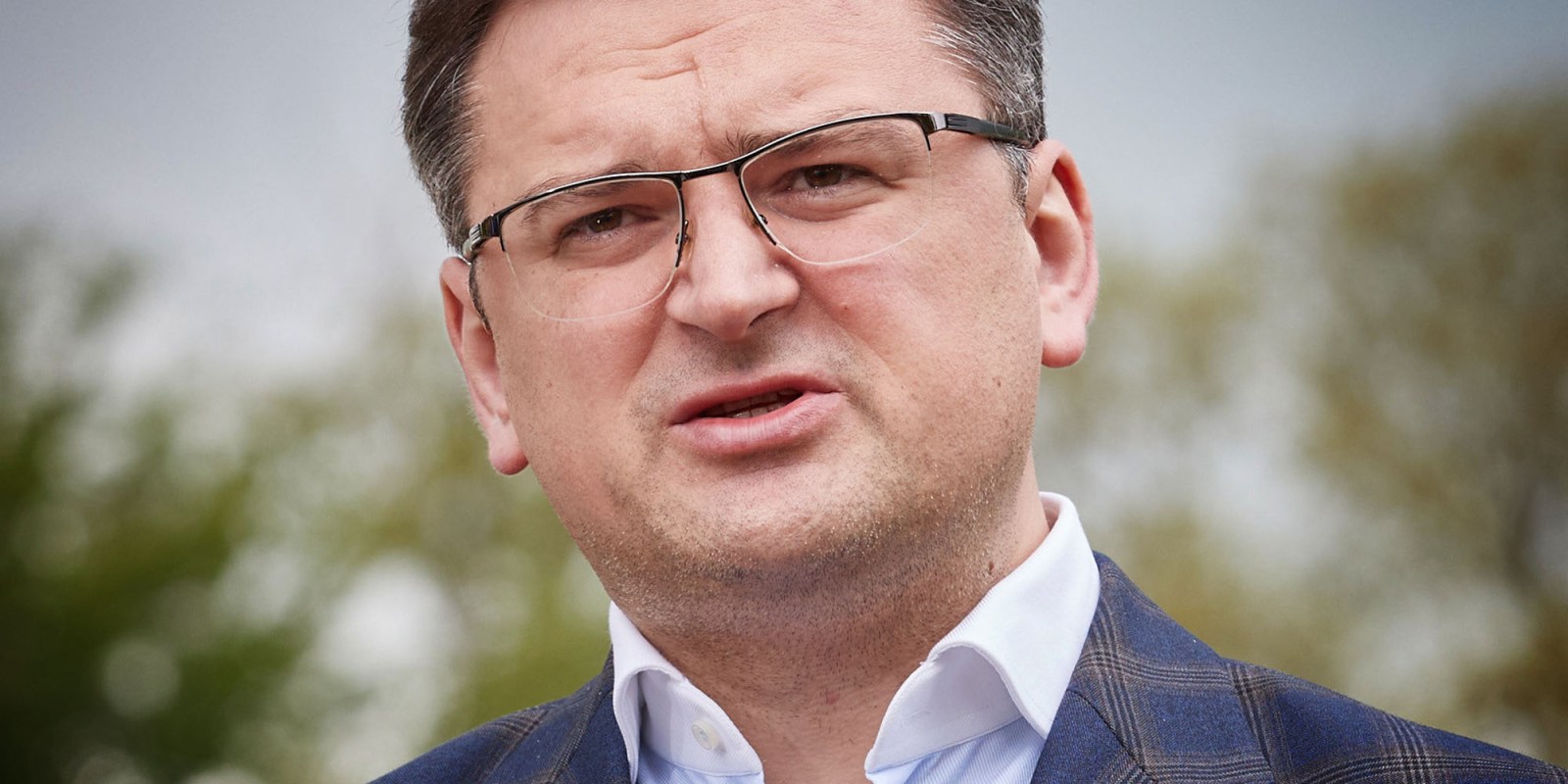 Minister Dmytro Kuleba tells Africa that Russia, not Ukraine, is to blame for the global food crisis.

That was according to a statement from the Kremlin, which Pretoria has not confirmed.

During an online briefing to African journalists on Thursday, Kuleba was asked if Ukraine was concerned that South Africa might end up buying Ukrainian grain which his government has accused Russia of stealing during its occupation of the country since its 24 February invasion.

“What we expect from other countries are two things,” Kuleba replied. “Do not buy stolen Ukrainian grain. And respect the fact that we were always reliable suppliers for you. Help us to solve the existing problem and we will continue trading with you on good terms.

“We clearly see a strategy of the Russian Federation to replace Ukraine on our traditional markets. We clearly see ships, vessels, taking stolen Ukrainian grain to countries like Syria or to Russia and then being exported further without a clear indication of where this grain comes from.”

Kuleba’s briefing — organised by the US embassy in South Africa — was to address the impact of the war in Ukraine on food security in Africa. A large drop in supplies of grains, especially wheat, particularly from Ukraine, but also from Russia, because of the war, has caused a spike in prices which is being felt especially keenly in Africa.

Russia and Ukraine have been engaged in a furious propaganda war, especially in Africa, about who is responsible for the food crisis. Kyiv blames Russia, because of its destruction of Ukraine’s agricultural facilities and blockade of Ukrainian ports, preventing them from exporting food. Moscow blames the food shortage on Ukraine and the West because of the sanctions against Russia.

Kuleba said for many years Ukraine had been delivering high-quality food products to its markets, including millions of tonnes of wheat, corn and sunflower oil especially.

“We have always been proud of our role as a food-security guarantor,” he said. He noted that Russia had been fully aware of the impact its invasion and occupation and particularly its blockade of Ukraine’s seaports would have around the world, aggravating a global food system already weakened by climate change and the Covid-19 pandemic.

“It’s truly horrible that Russia plays hunger games with the world by blocking food exports on the one hand and trying to shift the blame on to Ukraine with the other,” he said.

Russia was launching “a new wave of colonisation, aiming to reconfigure the global food system and make it more Russia-dependent than ever”.

Kuleba said Moscow was worried its friendly relations with many African nations might now be jeopardised by the food crisis it had caused.

“This is the main reason why Russian officials keep lying that it is Ukraine, the European Union or anyone else but Russia that is to blame for food shortages, rising prices and the risk of hunger.”

He urged African nations to “reject these lies” and insisted that Ukraine had always been happy to supply food to Africa and would do so again as soon as possible. All that Ukraine wanted was for Russia to lift its naval blockade and to allow unhindered and protected food exports.

Kuleba said Ukraine’s President Volodymyr Zelensky and Senegalese President Macky Sall — in his capacity as the current chairperson of the African Union — would attend the G7 summit this weekend in Germany where they would try to organise a global effort to tackle the food crisis by ending the blockade. Ramaphosa will also attend the summit.

Kuleba said Ukraine normally provided 10% of the world’s wheat, 14% of its corn and 47% of its sunflower oil. In Africa, 44% of Libya’s wheat, 42% of Tunisia’s wheat, 26% of Egypt’s wheat, 26% of Ethiopia’s wheat and 15% of Morocco’s wheat came from Ukraine. Just over a quarter of Ukraine’s food exports were to Africa.

These figures illustrated just how much Ukraine itself relied on its agricultural exports.

“And trust me, we have no intention of shooting ourselves in the foot by withholding the export of our agricultural products to the global market.

“We want to export our agricultural products to you as badly as you want to receive them,” Kuleba said.

He said Ukraine’s economic dependence on agricultural exports showed why it could not afford to blackmail the world by withholding supplies — as he said Russia was doing by insisting that Western sanctions should be lifted before it could allow Ukrainian food exports.

“We have a crystal-clear reputation as a supplier of agricultural products to the global market. And we don’t want that reputation to be ruined because of Russian propaganda and lies.”

He said the huge share of Ukraine’s agricultural exports in global markets also demonstrated why Russia’s claim to be able to replace Ukraine in these markets was false.

The lack of exports was hitting Ukraine’s economy hard at a time when it was already shrinking because of the war. The food crisis was not only caused by Russia’s blockade of ports, but because Russia was deliberately targeting Ukraine’s agricultural infrastructure “to inflict maximum damage on our food-producing capacity”. Russia was also thereby inflicting damage on African states that relied on Ukrainian agricultural exports.

Missile strikes had damaged many farms, stocks of seeds and harvests, warehouses and depots, and much agricultural machinery and equipment. As of May, Russia had also stolen up to 400,000 tonnes of grain and much agricultural equipment in occupied territory in the east and south. The Russians had riddled Ukrainian fields with mines to prevent farmers from cultivating their crops for years to come, threatening a multi-year global food crisis.

With its seaports blocked, Ukraine was working with the US, EU and neighbouring European states to export its products by land, rail and the Danube River. Ukraine had also established “solidarity” export routes through Romania to the Black Sea and via Poland and Lithuania to the Baltic Sea.

In April about 1.1 million tonnes of grain, oil and meal were exported by Ukraine on these alternative routes. But they could not replace the Black Sea routes and that made the products more expensive, even though Ukraine was giving a large discount for these goods.

So there was no real alternative to unblocking Odesa and Mikolai ports on the Black Sea.

He proposed an international operation under UN auspices to persuade Russia to lift the blockade, and also to provide an international coalition of willing states to send in their navies to secure the passage of cargo ships.

This was an extremely risky operation, but Ukraine was currently in an advanced stage of negotiations with the UN and other states in trying to realise this plan. He said it was important to implement the plan in the next few weeks. Kuleba said blocking exports for much longer would undermine the ability of Ukraine’s farmers to proceed with the next harvest.

He said African states had a crucial role to play in joining the effort to pressure Russia to lift its blockade.

Putin has partly blamed the blockade on the fact that Ukraine has mined its Black Sea ports. Kuleba was asked why Ukraine did not then remove those mines. He explained that it had laid the mines in the harbours to prevent Russia from capturing ports like Odesa and it was now concerned that Russia would seize the ports if it removed the mines.

“We can’t trust Russia,” he said and that was why it was calling for an internationally verified and trusted mechanism to guarantee the safe passage of cargo ships and to ensure Russia did not seize the ports if they were demined.

Kuleba underscored that Ukraine wished to deepen relations with Africa. He recalled that Zelensky recently addressed the African Union and that Ukraine had drafted its first Africa strategy and would appoint a special representative to implement it.